Jared Leto Is the Center of the Universe 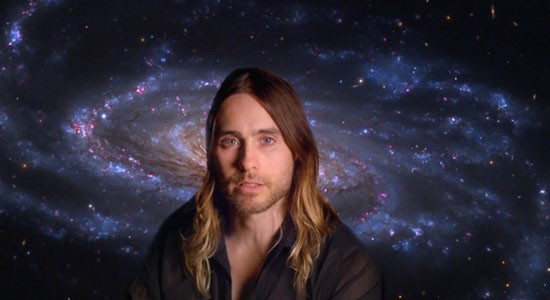 Jared Leto is proof we're living in an elaborate fiction. I can't suspend my disbelief long enough to accept that he's real: He's a million-selling rock idol who's also a serious actor known for taking on difficult roles. He's handsome and soft-spoken, serious and sensitive. He hangs out with hip, famous artists. He directs ambitiously arty music videos under an assumed name.

But Jared Leto isn't unbelievable because he manages all this while sucking so outrageously; what makes him genuinely uncanny is that he sucks so specifically. You ready to have your mind blown? He sucks precisely like bad fanfiction. The most plausible explanation of the universe is that our god is some teenage shut-in writing 600 chapters on what happened to Jordan "Can't Read" Catalano after the My So Called Life years.

Think about it. Doesn't everything about Leto go one step beyond plausibility? Jenny -- I've decided that's the name of the teen deity who authors the tale we all live within -- has decided Leto is not just an actor; he's the sort of actor who stays in character for weeks and loses, gains and loses huge amounts of weight to play oh-so-challenging roles: destitute junkie; John Lennon's killer; destitute transsexual junkie. (He gained 67 pounds to play Mark David Chapman, ballooning to a monstrous 158 pounds.) He's not just a platinum musician; he's basically in Wyld Stallyns. He gets Tibetan monks to chant in the studio and sends his fucking songs into space. He's not just friends with hip artists, he's friends with the only two jerkoff hip artists Jenny has ever heard of: Damien Hirst and Terry Richardson. (She could have said Banksy, but I guess she's trying to keep things a little plausible.) He doesn't just direct videos under an assumed name, he directs them under a MARVELOUS assumed name: Bartholomew [frantic Amadeus giggle] Cubbins!

Don't you see? Somebody out there is clearly making all this stuff up. Jared Leto is our world's too-good-to-be-true protagonist, and our world is a stupid piece of crap.

I know this revelation has shattered your psyche and made you question the meaning of everything, but don't go shooting yourself -- or Jared Leto -- just yet! It turns out this disturbing metaphysical scenario is actually a lot of fun. Once you can see the seams, you'll start to appreciate Jenny's work a little more. For example, sometimes our spotty teen deity comes up with a new music video concept for her dreamy-eyed hero. Then, in our world, adult human beings have to spend shitloads of money actually producing the thing.

Maybe it's just because I've found religion and accepted Jenny into my heart, but I adore the hell out of every 30 Seconds to Mars video. In fact, I recently got a bunch of my friends together to watch each Leto masterpiece back to back, chortling our fool heads off all the while (and this was not the first time we'd done it). I'd go so far as to say that Bartholomew Cubbins (a-HEEhee hee hee) is the greatest music-video director working today, for one simple reason: He spares no expense in the reckless pursuit of his artistic vision, and his artistic vision is hilarious.

Each Cubbins joint is a miniature masterpiece, complete with title cards and dialogue breaks and extended credits sequences and all that great shit that tells you "This Is A Short Film, Not A Music Video." (One of the things that also tells you that is a screen that says "A Film By Bartholomew Cubbins.") The passion and ambition and desire to create great art gurgles from every frame like goo from the mouth of a big silly baby. My personal favorite is "Kings and Queens," in which hipsters (and I use that word because it was obviously in the actual casting call) ride fixies around the city, and then a mean rich guy hits one of them with a fancy car, and then -- I won't spoil it, because it's way too good. Just watch the thing next time you have what seems like a fucking eternity to spare. It's worth it; I've probably watched it twenty times by now, and it never stops being funny.

Also notable is "From Yesterday," which may hold the world record for packing the most cockamamieness of plot into an under-ten-minute Short Film, Not A Music Video; the band is transported to ancient China and presented as a living gift to a child emperor, who then makes them don face-concealing ceremonial armor and do battle with a group of identically dressed warriors, but somehow the band manages to kill the bad guys and not each other. And the little asshole child emperor doesn't even watch! Meanwhile, Shannon Leto catches a glimpse of an old dude breastfeeding, so he responds by throwing INTENSE shade at the matter:

Bartholomew Cubbins represents the most wonderful mismatch between artistic pretension and artistic success currently available on the market. Nowhere is this better represented than in the VMA-winning "Up In the Air" short film, a wicked gumbo of Compelling Imagery and Big Art Shit, including some obligatory Damien Hirst nonsense, a shot of awful rock writer/pickup artist Neil Strauss in freaky makeup, an overweight lady slo-mo gyrating in fancy costume and other assorted motes of genius. This probably represented a point when Jenny needed a big award-sweeping work of major multimedia artistic genius to propel Jared Leto into the top stratospheres of fame and acclaim.

Which is where we find Lord Leto today, as he releases his most personal work to date. The "City of Angels" short film leaves behind the grandeur of early Cubbins and adopts a more meditative tone: It's a touching tribute to Los Angeles (which is where of course Jenny made Jared Leto live), presented through interviews with assorted LA celebrities and eccentrics. It's definitely another leap toward full short filmness; intoxicated by cinematic ambition, Leto comes dangerously close to forgetting to put the song in the clip.

Leto adds yet another feather to his cap by taking on the role of documentarian. He's assembled a diverse lineup of Angelenos to comment on the city, including Ashley Olsen, Olivia Wilde, James "Of Course" Franco and some celebrity impersonators and poignant homeless youth. The major highlight is famous Los Angeles native (???) Kanye West, who is given a treasured opportunity to wax Kanyeic on various matters both on-topic and off-.

Leto had his work cut out for him. Los Angeles can be a tough city to love -- a stupid, terrible hellhole probably filled with people like Jared Leto -- but he paints an affectionate portrait by letting a bunch of deeply troubled people say a lot of miserable things about what a soul-crushing, piece-of-shit town it is. But also, there are dreams and magic.

Perhaps because it's such a heartfelt project, Leto gave himself the director's credit for this one, though the title card still calls it a Bartholomew Cubbins film. But if we look a little deeper, we can definitely see Jenny's chocolatey fingerprints all over it: She hit upon a bit of dialogue she really liked for Jared, and you can spot it in just about every article about Leto. In the video -- during an interview segment with himself, I guess -- he says:

"My mother crawled out of the muddy banks of the Mississippi with a fistful of food stamps in one hand and two kids in the other on a mission to make a better life for herself and for her kids."

"We clawed our way out of the muddy banks of the Mississippi with food stamps in one hand and whatever you could hold in the other."

"You know, we joke we kind of climbed out of the muddy banks of the Mississippi River with food stamps in one hand and our instruments in the other -- our mother helped carve a new life for us."

"I've said this before, as kind of a joke, but there's a lot of truth to it, my mother climbed out of the muddy banks of the Mississippi with her kids in one hand and food stamps in the other [...] in an attempt to make a better life for herself."

Looks like Jenny's still workshopping the line a little, changing up who was doing the crawling and what exactly was in each hand, but at this point I'd say she's nearly got it.

I hope you'll agree that there's joy to be found in this ridiculous Letocentric universe of ours. Yeah, maybe we'll cease to exist as soon as Jenny loses interest in her teen crush, but look on the bright side: she'll inevitably get really bored at some point, and Jared Leto will start having sex with all the dudes from Final Fantasy VII.