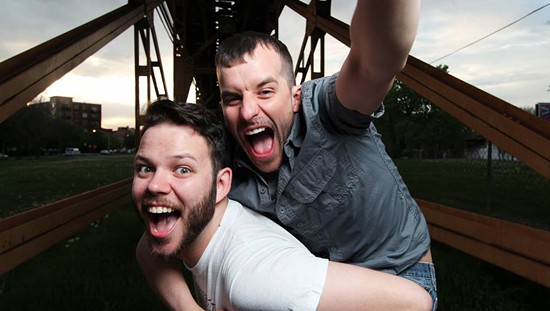 Baseball came and went, the holidays are quickly approaching and there's a good chance you're in need of a good laugh. Funny Events offers you the spectrum, from sure thing hilarious to fingers-crossed, "Oh God! I hope this works." Consider this your connection to sketch, standup, improv and everything in between and out of the box.

The Blackout Diaries isn't necessarily a novel idea in the comedy hemisphere. Drinking and a lack of self-control are regular themes in ye ol' comedy world, but hey, it's all about delivery and co-producer Matty Ryan has got it down pat. Alongside pal and veteran Chicago comic Kenny DeForest of the Nicest Guys in Town these two deliver stories and boozie-adventures will be nothing less than a laugh escapade.

The basement in Brennan's is proving to be one of the best makeshift comedy rooms in the city. It's small, narrow and you may have to cozy up to a stranger, but comics seem to feed off and capitalize on the "We're uncomfortable too" vibe. For a couple of comics that are as savvy behind the microphone as they are a twelve ounce bottle this room will surely amplify their performances.

Bare Knuckle Comedy is currently St. Louis' longest standing sketch, improv, and standup comedy endeavor, and now they've taken it back to the beginning with an open mic, in the spirit of finding your own true funny. It's all up for grabs once you get behind the mic. Variety is encouraged, new ideas are frivolously attempted and even the weird has a place at O'Shay's. Shoot, you can even bring in the short video you made. But be warned, in such an open and forward-thinking environment, someone is bound to fail at the expense of preparation. But that's what an open mic is all about; practice. Because unlike rock & roll, a killer riff isn't a killer riff until there's someone else around to respond.

Four time World Champion, New York Times best-seller and stand-up comic Mick Foley is dropping into the Funny Bone for one night only this month. He doesn't ignore nor rely on the fact that his wrestling career is the cause for a following in his new line of work, but rest assured Foley is no hack. Physical demands aside, a transition from wrestling to comedy isn't really that far of a stretch. With the added bonus of being an accomplished writer already under his championship belt, it's really a recipe for awesome.

If you're a WWE fan, it all makes perfect sense. If you're not, well, it's like watching Wayne's World 2 before the original. You might feel a little out of touch but you'll figure it out.

There's typically beer/booze aplenty at any given comedy show, but Standup Throwdown runner-up Emily Hickner has a new and positive spin on drinking in support of laughter. A night of beer, jokes and rock & roll sounds to me like a recipe for a guilty conscience with my morning coffee, but rest assured after a night like this you'll feel good about your evening of fun.

In support of the National Children's Cancer Society, Beers and Cheers will pair a local craft brew with a similarly local and crafty comic. Andrew Frank, Kenny Kinds and Erik Anker will get you laughing with your drafts, followed by rock & rollers Bruiser Queen. Recently added to the bill is Gabe Kea, the host of Cincinnati's Go Bananas. He comes through St. Louis a handful of times a year and every time he does the crowd wants to know when he's coming back. Also worth noting is the Designated Driver option, if craft beer isn't your thing then entry to the show is just $10. So if any of you have non-drinking pals out there who like to laugh, let them know they get a whopping 50% off.

Kevin White and Mikey Manker at Foam November 30 at 9 p.m.

St. Louis is the city that always leaves its porch light on, and in terms of comedy that could not be truer for Kevin White and Mikey Manker. Both St. Louisans born and bread, the two made their way to Chicago because at their respective times this town couldn't offer the opportunities a budding comic needed to grow.

But now they're heading home and will no doubt furnish a night of tomfoolery and heavy-handed punchlines. I'm sure I've said it before, but Kevin is one of the co-producers of Bare Knuckle Comedy (see above) who alongside Christian Lawrence hosted Manker's 2011 recording of Beg, Borrow and Steal. Their stint living together gave birth to McLean Avenue and I imagine there will be stories and one-up battles to attest to which of the two put more fun in dysfunctional.