Waka Flocka Flame Goes Deep: "I Rap About the Struggle" 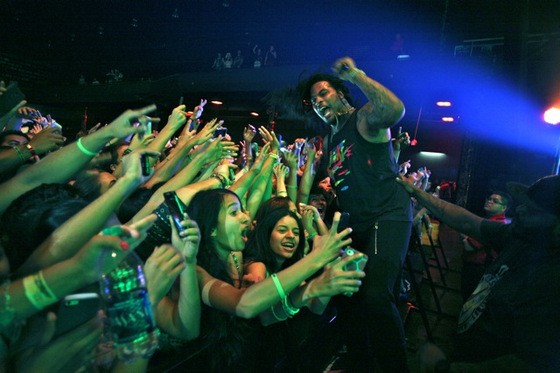 This Thursday, the Aokify America Tour rolls into our great city at the Pageant, bringing with it one of the best shows of a year approaching its end. In preparation, we were able to speak to one of the tour's major acts, the larger-than-life, animated-at-all-times rapper Waka Flocka Flame. The following is the result of our brief conversation:

Marco Torres: Please introduce yourself. Who are you?

Waka Flocka: Who am I? That's a good question to ask. I'm Waka Flocka Flame, man. CEO of Brick Squad Monopoly. I do hip-hop and a lot of other things.

Describe your music to us as if we had never heard it before.

When I hit the stage, it's like a Korn concert mixed with Onyx, Lil Jon, DMX, Run-DMC, mixed with EDM. Ain't nobody doing it like me! Like a head-buster...

Man, what?! Like atom bombs explosive! Its amazing, man!

Tell us about your history. I believe that you grew up in NYC and moved to Georgia, is that correct?

I was born in Jamaica, Queens. I moved to Atlanta when I was ten, then moved to Clayton County.

Would you say that there's a different dynamic between NYC and Georgia?

Ain't no difference, man, just the kids. Kids in New York had to grow up faster. Kids in Georgia were involved in sports. And the women was thicker! Good food, too!

How did you hook up with Steve Aoki?

First I hooked up with Borgore, and from there I ran into Steve's manager while on tour in Europe. And from there, we're here.

Tell us about your experience in Europe, where you have been on tour most of the year.

They loved me, but it was crazy 'cause I didn't understand shit anybody was saying! Which made me a bit nervous to take the stage, like wondering if they were gonna fuck with me. But when I got onstage, they knew everything! They don't speak English, but they knew the words to my tracks, just like in the States. Its no different; they just a little skinnier!

Tell us about your new mixtape, Roaches to Rolexes.

The reason I named it that is because I rap about the struggle, know what I'm saying? But now I made it, as me...as a person. Now it's time to get my family and my friends right. Now you're gonna hear Waka with some funds behind me. Waka as a man talking now.

Interview continues on the next page.

What is the worst song in the world, and why?

I can't stand "Step Daddy" by Hitman Sammy Sam. I just hate that fucking song. They should have never made it.

What about the best song in the world?

"Keep Ya Head Up" by Tupac.

If someone throws a beer bottle at you while you're onstage, what do you do?

Jump off and fuck 'em up!

What has been your best show ever?

My first show ever in South Carolina back in 2010. I knew I was there from that show. I loved it.

What would you buy with $1 million?

Shit, I already did that. Houses, cars and jewelry!

What would you buy with your last dollar?

I would invest 60 percent and live off the other 40 percent.

If you had the opportunity to work with anyone, alive or dead, who would it be and why?

Bernie Mac. I would have loved to do a movie with Bernie. That would be awesome.

Thanks for your time, sir. Keep it trill.