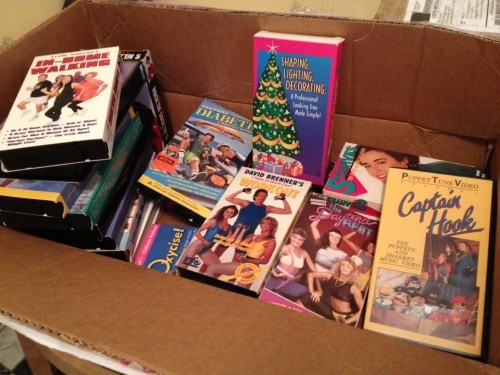 On Wednesday, November 6, the Found Footage Festival makes its way to the Mad Art Gallery (2727 S. 12th Street). Hosts Joe Pickett and Nick Prueher have scavenged the country's thrift shops and garage sales for the best -- and worst -- of VHS culture, and they excitedly share their finds with the masses year after year. Bizarre celebrity exercise fads, training montages, dating videos and "stranger danger" prevention tips all are screened "Mystery Science Theatre 3000" style, giving audiences a hilarious multi-sensory blast from the past.

Sounds like something tailor-made for the VCRs, right? The local '90s cover band (our "Best of St. Louis" winner in the cover band category) is widely known for bringing tube televisions and dozens of VHS tapes to shows, encouraging fans to swap out Showgirls and Jurassic Parktapes while listening to the group's rendition of "Smells Like Teen Spirit."

"You know, someone actually told me that one of our shows synced up perfectly with the scene in Rocky III or Rocky IV where he's in the Corvette, screaming down the road in one of those montages," says Alex Kahn, vocalist for the VCRs. "That's awesome! That's the kind of stuff that you envision happening."

When RFT Music told Kahn and bassist Greg Stinson about the Found Footage Festival, they were intrigued by the promise of VHS hilarity. So we showed them a few choice videos on the FFF website and documented the reactions of these pop culture experts:

Learn The Dances Of The 80s

Found Footage Festival description: "America's most popular dance instructor" Christy Lane teaches you how to do the Robo Cop, the Running Man, the Roger Rabbit, the Pac Man, and other completely irrelevant dances from the 1980s.

Kahn says: I've always tried to dance like that, and I don't know how you do it. I need this tape to learn, I guess. The Running Man dance is called the Vanilla Ice, isn't it? Or the M.C. Hammer? I think this is a workout videotape.

Stinson says: I'm thinking you could burn 100 calories every ten hours with those moves, maybe? Man, if Robocop knew this was happening, everyone in this video would be under arrest or dead. Christy Lane kind of looks like Jane Lynch (from Glee), but with a miniskirt on. My girlfriend dances like this pretty much every day. If I show her this video, I'll be dealing with that a lot more often. But yeah, I'm definitely a fan. That was crazy.

Found Footage Festival description: This clip, from a VHS tape called "California Big Hunks," shows how a graffiti-spraying street hunk turns his life around after seeing a shiny picture of Michael Jackson taped to a wall.

Kahn says: What kid doesn't try to be a graffiti artist? And now it's like "dancing on the ceiling," like that song. Oh my God -- a zebra striped tank top, tearing it off hulk hogan style. I've never seen... just wow. Wait a second, is this pornographic? This is quite amazing.

Stinson says: He was Banksy before Banksy. Man, I swear I've seen this guy at 14th and Locust. Wow. He was doing some damage to his local community and then saw God come to him and spoke to him through Michael Jackson's picture. He took him to a new place where he could positively influence others through his body. But the crazy thing is he obviously had some kind of spirit in his pants that had to get out.

This Video Is About Herpes!

Found Footage Festival description: This 1996 sex education video for teens tries so hard to be hip and edgy that it ends up being more irritating than the disease it's warning you about.

Kahn says: That one girl looked like Da Brat. Remember Da Brat? That was Da Brat telling me stuff! Then the producers were like, "Ok, we need an Asian dude, a black chick and a white person." It's good, though, that they have someone from the farms, someone from the ghetto and then a cartoon. Apparently you can use basketballs as the cure to herpes. Throw a basketball at private areas of women or men and you're good.

Stinson says: That's why basketball players have a higher rate of herpes -- because they're constantly out there battling. They're the front lines of the war against sexually transmitted diseases. And abstinence? You've gotta check yourself before you wreck yourself. You trust people who have street cred, and these kids obviously were from the streets. But no sex, play basketball, you'll be totally fine.

Continue for sleazy seduction tips and a dancing football team.

The Video Guide to Successful Seduction

Found Footage Festival description: Handsome folks from the '80s share their seduction tips. Plus, there's a sleazy reenactment thrown in for good measure.

Kahn says: I like the old grandpa telling me, "This is what works for me: Just be yourself." I feel like that's what you've gotta do - be yourself. Wait, was that showing me that you go up to a chick and put your hand in her blouse and you're good to go? But what about the times when you don't have a wine glass? Like, is a beer bottle acceptable? But I like her tights. She seduced me.

Stinson says: I think the bigger the rim rub, the better chance it's going to work out for you. And that was a big wine glass! I feel like when people ask about your favorite sexual encounter, you get a response like "Oh, the jacuzzi!" Come on, nothing happened in the jacuzzi. Wait, look! Yeah, you've gotta touch that nip in the restaurant. That's how you make that steak taste a little better. Do you think he ate a higher calorie meal than he normally should because he was sexually aroused?

Making of "Let's Ram It"

Found Footage Festival description: Behind-the-scenes of the sexually suggestive football music video, "Let's Ram It," by the 1986 L.A. Rams. It's all about being positive role models.

Kahn says: You know what, the Rams of that era didn't win football games, so they were like, "What we're gonna do is we're gonna focus on winning at dancing and recording songs." And they did! I mean this probably should have won them an award. L.A. had so many people who were just multi-talented. They can record music and make a movie, like Eddie Murphy.

Stinson says: Everything about these Rams were so much better [than the St. Louis Rams]: the jerseys, the enthusiasm, the hair, the moves. Where else could this have happened? I feel like L.A. was a pretty good place for this kind of stuff. That's a lot of flair and a lot of style; at that time, it wasn't openly accepted to be that stylish in professional sports. This video is like some attempt to create the "Harlem Shake," but without the Internet these guys were fucked.

The Found Footage Festival happens at 7:30 Wednesday at the Mad Art Gallery. Tickets are $12. Find more information on the Facebook event page.