Out Every Night: The Best Shows in St. Louis From November 4 to 10

This week, lots of acts stop through St. Louis to grace many of its great stages. Check out Talib Kweli, Steve Aoki, Lee Fields & the Expressions and many more. Click through for this week's recommendations, and stay tuned. We'll have plenty more picks for you for the weekend.

Inter Arma Monday, November 4, 7:30 p.m. w/ Black Tusk, Ashes and Iron, White Fire, Fumer @ The Firebird - $10-$14 By Rick Giordano From this 2013 show preview: Richmond, Virginia's Inter Arma is one of those bands I'm happy to say I can't quite pigeonhole into a specific genre. The sound reeks of ominous black metal atmosphere, but with a much heavier low end and some progressive and spacey elements thrown in as well. Inter Arma is on tour with Black Tusk, a Savannah-based sludge trio.

Talib Kweli Tuesday, November 5, 8 p.m. @ Old Rock House - $15/$18 By Daniel Hill From this 2012 show preview: Talib Kweli rose to prominence in the late '90s as the not-Mos-Def half of the pioneering underground alternative hip-hop group Black Star. Since then the prolific Kweli has had difficulty shaking the oft-scoffed "conscious rapper" label, despite having released albums with a decidedly more mainstream-accessible sound. Still, collaborations with the likes of Kanye West, Madlib, Pete Rock and scores more have endeared Kweli to critics and fans alike and helped prove the versatility of the rapper. Jay-Z's lyrical nod on 2003's Black Album helped to expose Kweli to more mainstream success but may have contributed in an ancillary way to that one career misstep, 2004's Beautiful Struggle. All has been forgiven with 2011's Gutter Rainbows, though - expect melted microphones at the Old Rock House.

Lee Fields & the Expressions Wednesday, November 6, 8:30 p.m. w/ Big Brother Thunder & the Master Blasters, DJ MAKossa, Hal Greens @ 2720 Cherokee Performing Arts Center - $20/$22 From this 2012 show review: Bathed in blue, like the hottest point of the flame, Lee Fields took to the row of subwoofers as the front row scrambled to clear off the empties. He went there again and again, rearing back with a clenched fist to give one long, majestic, guttural soul-scream. He's drenched in sweat, but you could have guessed that. Lee Fields and the Expressions held a respectable crowd of mostly young - at my and Fields' age, 30-somethings count - funk and soul aficionados rapt. The club might have wished for another 50 bodies to press in towards the stage, but Fields and his band played it cool and hot as the songs - fourteen of them, largely drawn from Fields' recent albums My World and Faithful Man - demanded. By the end of the night they had a hundred hands waving in the air and a hundred hips hugging their groove.

Steve Aoki Thursday, November 7, 7 p.m. w/ Borgore, Waka Flocka Flame, Felix Cartal, Deorro, Kryoman @ The Pageant - $35-$85 By Diana Benanti From this 2012 interview: Mention Steve Aoki in a crowded room and watch the reactions; some will cross themselves in reverence, most will nod their recognition at the name, and the rest will know him only as "a DJ." But Steve Aoki has never been just a DJ; he's a modern auteur with his finger rammed in the proverbial sphincter of music and culture. Aoki got his start as the singer of a hardcore screamo band, but he's made a name for himself in indie, electro, EDM, pop and every musical mutation between. He started his own label, Dim Mak Records, in 1996, and he's broken artists from Bloc Party to the Bloody Beetroots. He's got more A&R skill in him than an army of big label drones.

Basia Bulat Friday, November 8, 8 p.m. w/ Foreign Fields @ Off Broadway - $12-$15 By John Vettese From this 2008 show preview: Think of Basia Bulat as a one-woman answer to Antony and the Johnsons. The Canadian songwriter's honeyed melodies and romantic melancholia on her debut, Oh, My Darling, echo New York's premier chamber crooner. "Snakes and Ladders" glides along to classy piano arpeggios and cello counterpoints while she hesitantly wonders in a nervous vibrato, "Who believes in fate anyway?" But Bulat doesn't mope as heavily as Antony does on Darling. Moreover, the album contrasts its lovelorn moments with a tremendous sense of joy: "I Was a Daughter" leaps out of the speakers on the power of its fluttering sixteenth-note handclaps, while "In the Night" may be indie music's first autoharp anthem. These cinematic, adventurous songs swell around miniature orchestral arrangements, not unlike the work Marla Hansen has crafted since striking out from Sufjan Stevens' band. On Bulat's less inspired moments (the jazz-licky "Why Can't It Be Mine"), she sounds like late-era Beth Orton: languid, dull but otherwise inoffensive. When she's on, she has the potential to make hearts melt and soar as easily as Antony. 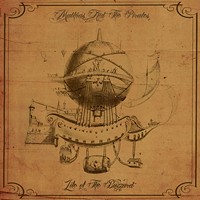 Mathias & the Pirates Friday, November 8, 8:30 p.m. w/ The Palmer Squares, Baytron, Paul Martin @ The Demo By Christian Schaeffer From "Homespun: Mathias & the Pirates": Former Earthworms member Mathias treads tricky ground on this release, his second with the Pirates. On "Jack Palance" he decries the modernity of Twitter, Justin Bieber and hipsters while celebrating the golden era of hip-hop. But there are few overt nods to the old-school in the album's production — the boom-bap 808 hits on "Go With Me" match the uptown soul of the song, and DJ LB's scratches are tasteful and rarely overpowering. So, why does Mathias stick with pirates, instead of the traditional gangster motif? Hard to say, but it's a wrinkle on the traditional outlaw archetype, and the yo-ho-ho shanties don't overwhelm what is a solid and varied program.

Kevin Harris Saturday, November 9, 8 p.m. w/ Kingston Family Singers @ BANK Projects - free By Mabel Suen From a wall of boutique synth boxes brimming with countless inputs, bright orange patch cables protrude every which way, like a series of veins pumping blood through a robot. Experimental artist Kevin Harris coordinates this network of patches to generate a set of modular sounds to manipulate during his performances, which notably feature live, psychedelic video synthesis. At this show, expect video projections and panned quadrophonic sound from both Harris and the Kingston Family Singers. The latter is a Belleville collective of experimental sight and sound that utilizes everything from drone and harsh electronic noise to found sound and video. The artists will completely envelop onlookers with this enclosed installation, so prepare for a surreal experience.

Kenshiro's Saturday, November 9, 8 p.m. w/ The Locals, Superfun Yeah Yeah Rocketship, Soma @ Lemmons By Mabel Suen From "Get to Know Kenshiro's": Named after the savage and powerful lead character of classic anime, Fist of the North Star, Kenshiro's packs a corresponding wallop with its raw and relentless garage'n'roll. Simple yet powerful chords shakily traipse between strummed and stabbed motions, and the boomy rhythm section holds down frontman Prato's howls and squealing guitar licks as they attempt to fly away in an electrifying frenzy. The self-described "basement punk for the unworthy" provides with upbeat, dance-worthy songs generated from youthful souls.

The Lone Bellow Sunday, November 10, 8 p.m. w/ Greg Holden @ Old Rock House - $15 By Roy Kasten If Lady Antebellum isn't careful, the Lone Bellow -- a Brooklyn-based trio that harmonizes as if the Birmingham Community Mass Choir is taking auditions -- will steal the old-time pop zeitgeist out from under its members over-polished heels. Zach Williams, Kanene Doheney Pipkin and Brian Elmquist hold nothing back on this year's self-titled debut, embracing vocal dynamics like they're the key to neo-folk survival (they are; just ask the Civil Wars) and even slipping in a "man of constant sorrow" allusion. Still, the only thing studied about the Lone Bellow is its traveling bible salesmen garb, but with harmonies this good they could dress like mimes and still have country-folk fans swooning. Aberdeen, Scotland-born singer-songwriter Greg Holden opens this leg of the Lone Bellow's tour. He's won notices for penning a single for American Idol-winner Phillip Phillips, but Holden himself has a voice and narrative style worth arriving early for.