Joey Bada$$ at the Pageant: "There's One Thing I Don't Love About St. Louis, and That's the Fucking Police" 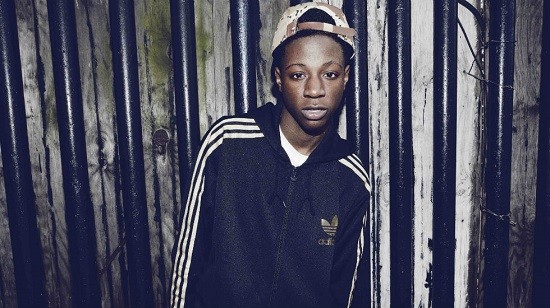 I arrived promptly at 8 p.m. (I never showed up for the openers when I was younger -- being early to shows was "uncool"), and I was surprised to see that the pit already had a good amount of people in it. Apparently none of them got the memo about how showing up on time is obviously unhip. Unless I missed the memo that said showing up on time is the new thing? I assume the 8 p.m. crowd was there to catch all five acts. I came early for a decent parking spot.

It should be noted that this was undeniably the Smoker's Club tour, as when I approached the doors of the Pageant, the smell of marijuana on all the kids was overwhelming.

Also worth noting is that the show was all ages, information I didn't have to double-check on my ticket, because sitting near me was a large group of fourteen-year-old boys (who were trying too hard, as fourteen-year-olds do) and what looked to be a seventeen-year-old couple (who couldn't keep their hands off each other, and who definitely took a Facebook-worthy prom-style picture). Of course the best lighting for my fervent scribbles was near them, though neither group was as bothersome as one would expect -- they seemed to be playing it cool/not wanting to show too much excitement, calmly drinking concession-stand paper-cupped sodas.

Otherwise, the evening was as expected: a hyperbolic amount of bucket hats, crew-neck sweatshirts and general streetwear, a lot of young (mostly white) kids, who were, as it turned out, there to see Ab-Soul and sing along to every single bar, and everyone in the pit crowding the stage in order to grab a hand or two of someone marginally famous. Unfortunately, there wasn't much to overhear from the crowd -- the venue was never quiet since there was always a performer or DJ onstage.

There was, of course, a lot of weed talk from the performers -- during sets, in between sets, in between free T-shirt throwings -- I reiterate, this is the Smoker's Club tour. At some point, it felt a little formulaic: There are only so many times you can tell your audience to light up in the pit, or at the top of the arch (though the kid onstage said "arc", which annoyed my St. Louisan sensibilities) before it becomes corny. The powerful weed aroma remained a mystery, since nothing illicit was ever in sight. The Smoker's Club must have either sprayed the whole venue with weed-smelling perfume, or maybe hot-boxed the place before everyone arrived.

Of course Pro Era opened their set with a nod to Joey Bada$$ and Ab-Soul's Monday night issues with the St. Louis cops, asking the audience to chant "fuck the police" with them, which happened several times throughout the night, across all the acts.

Continue to page two for more of our review. RIP Capital STEEZ.

The Pro Era set began with Joey flowing by himself. He struck a good balance between rapping and crowd-friendliness, playing songs from both 1999 and Summer Knights. The second half involved more of his Pro Era cohorts, mainly the two big staples Kirk Knight and CJ Fly, who rapped a couple of their solo tracks. Also on stage were Chuck Strangers, Kwon, A La $ole and Dessy Hinds, among others. CJ's style was similar to Joey's while Kirk had a distinctly different style, marked by a much fatter, booming bass. In total, their set was an hour long, featuring Joey on almost every track. The group closed with an homage to crew member Capital Steez, who passed away last December; and one of Joey's more popular tracks from 1999, "Survival Tactics".

While having a perhaps semi-questionably stylized name, Joey Bada$$ is probably one of the most distinctive emcees out there, his cadence and sampling choices evocative of '90s hip-hop. Though not a "conscious rapper," he manages to insert a fair amount of conscious raps between his Bonita Applebum, weed and money verses. Joey, though young, samples well known producers, from the likes of MF Doom, Dilla, Madlib, 9th Wonder, Knxwledge, Oddisee and more.

Joey expressed love for the city but added a caveat. "There's one thing I don't love about St. Louis, and that's the fucking police, man," he said, again referencing Monday night's run-in with the law.

"But that shit didn't happen in St. Louis," an onstage cohort interjected. "It happened in the suburbs."

Suburb or city, the sentiment remained the same. "Fuck the police!" Joey shouted again, before launching into another track.

By the looks of it, the show didn't sell out, though I did leave halfway into Ab-Soul. As I was leaving, I saw a few dumbass kids smoking a bowl in the neighboring car -- Smoker's Club indeed.

Continue to page three for note and the setlist.

I got into Joey Bada$$ in early 2012, so I should say I'm a little biased. I don't really think any of the other acts stood up to him -- his cadence and sampling choices are pretty distinct from most current emcees. Sometimes it's hard to put on a good rap show, but Joey is quite skilled. I definitely could have done without the first two acts, though they got progressively better as the night went on. The crowd largely seemed to be there for Ab-Soul.

Ab-Soul to a bunch of white kids, "Y'all wanna go back to the 'hood real quick?"

Still one of Joey Bada$$'s greatest lines, "Tell the based god don't quit his day job". See: Twitter beef between Joey and Lil B.