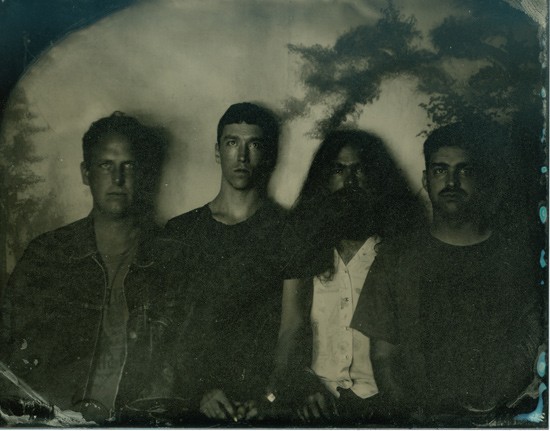 Technically, Halloween starts tonight at midnight, and the creepy racket hosted at Plush (3224 Locust Street; 314-535-2686) should be enough to kick off the sordid holiday right. Costumes are the norm with Skarekrau Radio, the local no-wave cult that adorns itself in wigs and masks on the regular. Fresh off the release of its latest LP, Skarekrau Radio will perform tonight alongside our city's proudest proprietor of noise, Ghost Ice (We named him Best Noise Band in 2012 and our readers, that means you, named him Best Noise in the 2013 RFT Music Awards). Right next to the locals will be the venerable Cave, from Chicago.

Costumed or not, Cave looks like a band of psychedelic hippies from the future and brings a sound to fit that fashion. The Chicago group draws heavy influence from early Kraut-rock, but it takes a more meditative approach. At times, Cave can sound like a trippy drum circle with a fresh coat of strings and synths. The group's newest studio effort, Threace, is a constant stream of songs with subtle depth. Expect the live show to carry the same deep layers of space rock.

Cooper Crain, founding member and guitarist of Cave, was kind enough to answer a few quick questions ahead of tonight's show. Read on to see what he has to say about Threace.

RFT Music: The sounds of Threace differ from your first outing as Cave. The Hunt Like Devil/Jamz LP (2007) certainly provides a much more rock-oriented and aggressive sound. What was the artistic aim for Cave in 2007?

Cooper Crain: Cave in 2007 was a different mindset all together. We were just experimenting with the setup and sounds for the first time as a band.

The new LP feels like a single, album-length progression. What was Cave, as a band, looking to explore with this new record?

Crain: We were trying new experiments in recording for the band, which was helpful in figuring out new sounds and positive developments within the playing. We achieved this goal and are happy with Threace.

Touring is an essential component in spreading the band's sounds. With such an intense schedule, including past trips abroad through Europe and more, how does Cave balance performance and conception of new music?

Crain: During the times when we're not playing shows, we work on new material at practice. Seems to be standard for everyone in a band.

Following the ongoing tour through America, what plans does Cave have for future touring for Threace? Are there any festivals or big events coming your way?

Crain: Touring to different parts of the world, all for Threace.

Being from Missouri, I hear word that Cave really started when some of you lived in Columbia. So, to dispel the rumor: Is Cave originally from Columbia or Chicago?

Crain: Cave the band started playing in Columbia, Missouri, during the summer of 2005.