Last week at my warehouse job, I sat in a forklift and hoisted a wooden pallet to prepare for shipping. As the dust particles scattered from the machine's exhaust, a thought settled into my brain that I could not rid myself of:

With this disconcerting concept echoing through my head like a fart in a sewer, I grimaced and prepared myself to unearth another dark corner of the Internet. I went home and did, indeed, find said Gavin Rossdale fan fiction. It was sappy and silly. Then I found some Pantera fan fiction, which included the line, "Phil set his beer down in between my legs and sparked a joint." My eyes watered in disbelief upon finding a 176,196-word story about the band Savage Garden. As my browser overflowed with newly opened tabs, I became further consumed with tracking down the absolute worst stories ever conceived.

It got pretty bad. Last Wednesday, I was late to an appointment with a therapist because I had found a site with 1,241 stories about Avenged Sevenfold. Ironically, the content within necessitated the need for a therapist all the more.

And although I'll likely need even more counseling after this, I'm lucky enough to have an outlet for the madness that music journalism brings me into. To help you find joy in my suffering, we've illustrated and re-published six of most disturbing musical fan-made fictional stories out there. 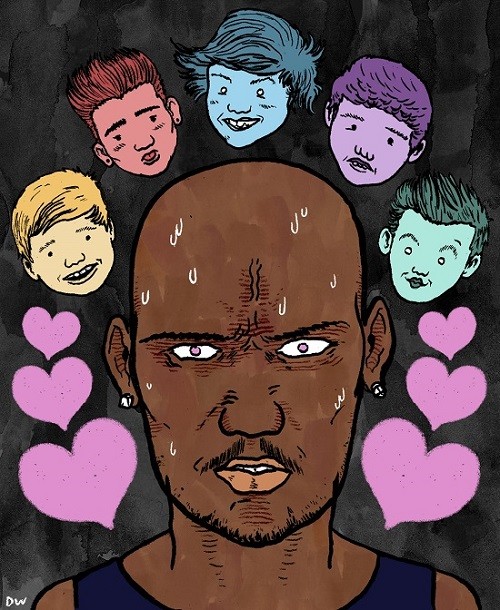 Slash is a few things: a punctuation mark, a guitarist for one of the worst bands ever and a punk zine from the late 1970s. Slash, I've recently learned, is also the term for common type of fan fiction that focuses on same-sex fantasies, regardless of the actual orientation of the subjects.

In our first example, we have illustrated the only story written by author KillerKween, wherein DMX picks up his gun-phone and calls the British boy band, One Direction, over to his place to smoke weed. Then One Direction convinces DMX that he is gay. DMX weeps as he asks, "Where da dick at?" and One Direction cleverly finishes the tale with a joke about "how Ruff Rydas roll."

The story is so directly offensive that it's impossible to begin to pick it apart in a public setting. Keep in mind, the title also states that this is merely "Chapter One".

I spent a solid half-hour reading stories of Avenged Sevenfold in haunted houses. I managed to pull a special sort of entertainment from the story "Hater's Gonna Hate," due to the strange poem/song that was composed as a companion piece. A sample of the passage about the band's guitarist, Zacky Vengeance:

Haters gonna hate, Vengeance gonna seek revenge
he'll show you how worthless you are to them
then he'll tie you up and put you in the oven,
He'll bake you just like in the story Hatzel and Grittle
Then lastly he'll feed you to other haters
leaving them a note saying (who's next to be baked, if not then you'll be barbecued)
can't you see, he attended and owns Vengeance University.

The story revolves around some high school jocks who go and do some stupid bullshit and hate on an Avenged Sevenfold song on the radio. They run out of gas in a creepy town after bats swoop around them. But these aren't just any bats -- they're A7X bats, which, just in case you haven't seen one tattooed on the neck of someone buying a Monster energy drink, are skulls with wings.

The "death bats" chase a character named Michael into a restaurant where he encounters the band's singer, M. Shadows, who tries to make him eat tacos. Then he punches Michael with a microphone and eats his soul with his evil shadow. The rest of the story is a bunch of who-gives-a-crap, except for a section where someone eats a human eyeball after mistaking it for a cherry tomato.

Predictably, "The Carlos Santana Operation" follows the story of a Mexican bandit by the name of Carlos Santana and the hilarity that ensues when one has the same name as the asshole that is 50 percent responsible for inflicting the song "Smooth" on all of us. (Rob Thomas, you are not off the hook.) And although it burns part of my soul to write the words "good" and "Santana" in the same sentence, it is necessary to explain the plot:

The "bad" Santana is performing the "good" Santana's songs in nightclubs, so the "good" guitarist (UGH) decides to clear his name by challenging the evil one to a duel. The "good" Santana (it hurts every time) gets abducted and then inexplicably faces a forced homosexual marriage to the "bad" Santana's cousin, Victor. The only possible explanation to this offensive tidbit is that this fan fiction story is also based on the 2007 hick movie Delta Farce, a film starring Larry the Cable Guy, Bill Engvall and actor DJ Qualls.

"What if Rogue was blonde? What if Wolverine had not only claws, but balls of metal? What if Storm really could scream? And what if they all were played by... rockstars?!"

Don't miss the rest of her site, which features some stellar erotica about Nikki Sixx of Motley Crue, hanging out with Dani Filth from UK pop/black metal sensations Cradle of Filth. 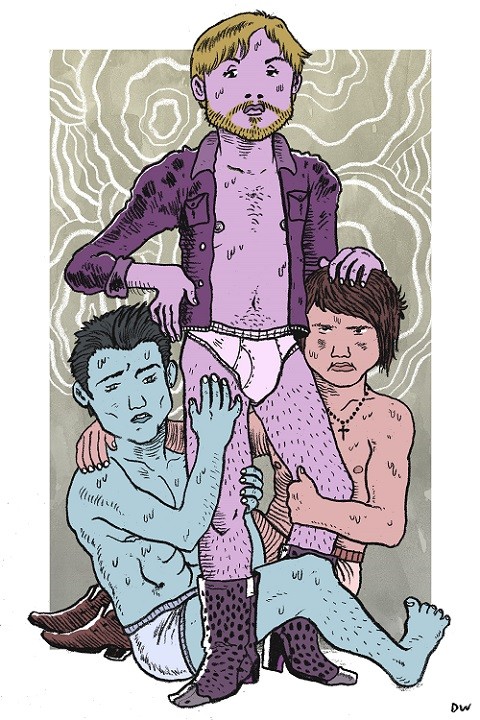 2. Kings of Leon: "I Like You So Much Better When You're Naked"

It really doesn't matter what the story is about. It's three brothers having sex with each other -- an idea that is almost as upsetting as Kings of Leon's music. Move along.

Snoop Dogg comes home to feed his dog, Charles Barkley, and to update his Twitter. He clicks on a news link to a Japanese pop star named Hatsune Miku -- an anime vocal synthesizer thing that is 100 percent real. At the end of the story, Snoop Dogg cries and says, "Welcome back, Tupac." There is no explanation, and I have no words.