Interview: Taking Back Sunday to Perform with Guest Singer for Thursday's Show at the Pageant 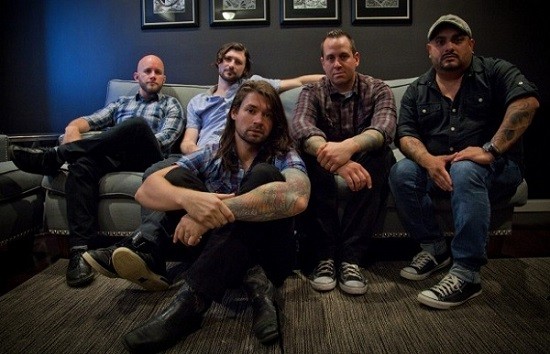 [Update since this interview took place: Former Underoath frontman Spencer Chamberlain will be filling in for TBS lead singer Adam Lazzara for an indefinite amount of time while Lazzara tends to his wife and newborn child. The St. Louis date on October 31 at the Pageant is still on.]

Taking Back Sunday created its own brand of emo-rock-pop music and made a name for itself that's lasted for over ten years, way past when everyone got too embarrassed to admit that they listen to emo. Somehow the band managed to keep us guessing, with every album displaying its own sound, mixing genres up constantly. In 2003, due to troubled band relationships, two members (John Nolan and Shaun Cooper) left the band to form Straylight Run. In 2011, they put their differences aside and reunited their original lineup.

In 2012 TBS kicked off a sold-out reunion tour of nostalgia, playing its breakout Victory Records album, Tell All Your Friends, from start to finish in every city after releasing a new self-titled album in 2011. This year the boys got right back to work, getting ready for yet another new album and hitting the road again. We spoke with guitarist John Nolan and got all the juicy TBS gossip of 2013.

Julia Burch: So, how are things going for Taking Back Sunday?

Nolan: They're going alright. We've had to cancel a few shows because our singer Adam's baby came unexpectedly, about a month early, so he went home to be with his wife and the baby. So we've had to cancel a couple of shows and things are a little up in the air.

Bad news for St Louis! We were looking forward to seeing you on Halloween.

Nolan: Well, we're hoping that we can get things worked out and keep the tour going. We're just kind of figuring it out right now.

Well, that's exciting news for him anyway. How is the new album coming along?

Nolan: We just finished recording it; it's in the mixing phase right now.

Do you have a projected release date?

Nolan: It's not gonna be til next year. It'll be probably in the spring next year. That's what we're shooting for, anyway.

So the self-titled album was released in 2011, right after the original line up got back together. It seemed like it had a harder edge than the previous albums. How did you guys feel about how it turned out?

Nolan: I'm really proud of that record. We worked really hard on it. Since we were all coming back together after so many years of not playing music together, it was also a really interesting learning experience. To kind of work together again in a new place after all that time, and all the things we'd learned as musicians... The experience was pretty interesting, and we felt like we came out with something that was not completely like any other Taking Back Sunday record. I think it was really strong.

"This Is All Now" from the self-titled album.

It was a great album. What should we expect from the new one?

Nolan: I think this new record is a little more diverse; there's more ups and downs. I feel like the self-titled was sort of like every song was pretty much mid-tempo to up-tempo. This one is gonna be more about the extremes of quiet, slow songs and louder, faster songs, as well as stuff in between. I think it's going to be more up and down. There are some songs where we kind of just experimented with stuff that we never had before, so there will be some stuff that's not like any other Taking Back Sunday songs, but also some stuff that people expect more.

What's it been like being back in the band with the original line up?

Nolan: It's just been really interesting. It's hard to believe it's been like three years now. It's kind of crazy; it kind of still feels like we're still new to being back in the band. It's been really interesting; we went from not seeing each other or talking hardly at all for seven or eight years to being back together again all the time. So the first year just kind of felt like a reunion, like we were just reconnecting and learning how to work together again. Then it moved into this phase of just feeling totally normal, like that's what we've been doing forever, and now it's been really exciting to get to a point where we know how to work together and we're comfortable and working together well. It's exciting.

Nolan: In the old days we worked together much worse than we do now.

Were you surprised to get that call saying that they wanted to get the original line up back?

Nolan: I was very surprised. To me, it came out of nowhere. I couldn't believe it.

Does the band have anything else going on or any news we should know about? Nolan: No, not really. Like I said, we're hoping the tour will get back on in the next few days, so hopefully we'll be seeing you on Halloween!

Taking Back Sunday will perform at the Pageant this Thursday, October 31. Tickets are $25 to $30.