Heavy-Metal Yoga Is a Thing 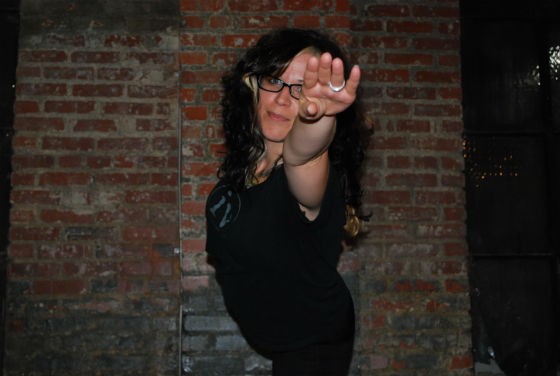 It's a Tuesday night, and I am sitting on a yoga mat in the back of a former grocery store in Pittsburgh, spreading my legs as far as they can go. I reflexively turn to see how the woman next to me is managing her dragonfly pose when I realize I can barely see her. The room is lit only by two lights that look like tin cans sitting in corners; they offer about as much illumination as a pair of Yankee jar candles. Kimee Massie, the heavily tattooed instructor (not to be confused with Kim Massie, the local singer), comes over to help me put a foam block under my ass. It gives me some leverage, and I feel a greater stretch in my inner thighs, but I still look over again to see how far the woman on the neighboring mat has gotten. I squint and make out the words on her T-shirt: "Fuck This. I'm Going Skateboarding."

Meanwhile, there is a dark, droning sound coming out of the stereo. Imagine the hiss that is omnipresent in David Lynch's Eraserhead overlapped by the slow diddling of an autistic noise-rock guitarist. It's oddly comforting in its noninvasive nature and consistency. I remember to inhale deeply.

This is Black Yoga, a take on the ancient Indian practice/frequent girlfriend bonding ritual for those who "get bored with the sound of birds and waterfalls," says Kimee, who concocted the class with her husband Scott (vocalist of a thrash band called Storm King). The room is dark, the new-age talk kept to a minimum, and the soundtrack a mix of trip-hop, industrial rock and doom metal.

"I don't think of it as better or worse than your typical yoga class -- just different, for a different crowd," says Kimee (who also teaches more a traditional class at a suburban health spa).

The Massies -- a definitively alt couple who are covered from neck to toe in black clothing and tattoo ink -- hit on the idea during Kimee's second year as an instructor. They were on a road trip and wondered if there was a play list for a yoga class somewhere in the massive collection of CDs from dark, commercially unnoticed alt-rock subgenres they brought along.

Scott, who is used to shifting through the work of fringe bands as the head of a small label called the Innervenus Music Collective, compiled the first few mix CDs, with selections from the likes of Earth, Dark Space, Sunn O))) and two bands whose names indicated they were formed just for a project like this: Om and Dark Buddha Rising.

All are bands from the darker, more ambient fringes of heavy metal, but Scott says, "It's not so much about finding the right kind of bands as it is the right kind of songs. Every band we like has that one obscure song that could work. I put the mellowest song from Type O Negative on one these CDs."

Mellowness is actually an important factor for Black Yoga (sometimes stylized as Black Yo)))ga in honor of Sunn O))), the standard bearers of doom rock). The songs must share a few traits with the warm mood music and sitar jam sessions more common in yoga-studio stereos: They have to be atmospheric and nonintrusive. Kimee doesn't want anything rhythmic or loud enough to distract students from their poses.

"I think people see the flyers and assume we are head-banging to Sepultura and calling it yoga," says Scott. "That is definitely not the case."

Still, they have attracted a slew of punk and metal musicians to their twice-weekly classes. On the night I went, I spotted what was obviously a de-spiked mohawk in the crowd.

The Massies say the classes often have an even male-female ratio. This one was more like one man for every two women, which by yoga standards is still a sausage party. (Most yoga classes have the male-female ratio of a Stephenie Meyer book signing.)

Kimee says one reason she flips the light switch is to create a nonjudgmental environment for a crowd that might not live and breathe fitness -- to defuse the aspect of yoga class that has become like the gym, a show-off spot for gorgeous people in tights (though the lighting is still enough to make out her poses as she leads.)

My hour of Black Yoga also made me realize how seldom in other classes I listened to the instructor. Instead, I followed the students around me. Yoga in the dark provides a solid link from teacher to pupil. My only reliable cues were Kimee's commands of "bend your right knee" or "hands in heart position."

But of course, the truly unique feature of the class was the soundtrack, which is a pleasant relief from some of the more bullshitty aspects of yoga.

Yoga asks you to embrace peace and serenity, not just for 90 minutes but as a pervading, self-cultivated outlook, a message bolstered by chanting-and-nature-sounds playlists. I always valued yoga as a low-impact workout that made me feel really, really good -- a perfect mix of self-massage and endorphin release -- but I'm too cynical for the more meditative part of it. Whenever the stick-figure woman at the front of the class launches into a Maharishi routine, I find myself tuning out and glancing at the perfect apricot-shaped asses around me. At best, yoga offers me a break from my life as an impoverished millennial with an unstable freelance career and intimacy issues, not a solution to it.

Peace and serenity are not what doom metal, the central genre of Scott's playlists, are about. Bands like Earth and Sunn O))) relay the opposite: a feeling of strife, anxiety and occasionally imminent death. I listened to their hissing static and lumbering guitar as I moved through poses, and I felt like I wasn't being asked to part with my stress and angst. The sound of trepidation was right there on the stereo -- but it was small, manageable and came in a predictable rhythm, and I was still able to work toward something as I experienced it.

Maybe for cynics and hard-asses attracted to metal, that's a more honest and appealing message than that of birds and waterfalls.