The Silver Ballroom punk and pinball pub seems like a natural choice for convening with Bad Dates, a rock'n'roll quartet that's gigged around the south side since September 2012. When RFT Music arrives on the scene, the dudes are already crowded around the bar's jukebox making some choice selections to set the mood for our interview. Tonight, Bad Dates debuts its first ever recording at the local dive bar where it played its first show, CBGB.

While manning the helm at local shop Apop Records, vocalist Mark Willey and guitarist Gabe Karabell (also of Black Panties) decided to start their band together while digging hard on garagey-glam rock records from Slade and Mondo Deco. Bad Dates also channel the hard rock influence of the New York Dolls, which they covered last Halloween - drag and all. They set out with the intent of melding glam with power pop, and the resulting high-spirited rock comes with a side of sweet shades and a saucy disposition.

"At its core, we just wanted fist-pumping, foot-stomping, beer-spittin' songs in 4/4 time. That's what we do for the most part," says Willey, adding that, "We take it seriously, but it's not meant to be taken seriously."

Like any decent rock-and-roller, Willey writes about the party, the morning after the party and - on a more sentimental note - the heart and soul of living in the city.

"We all have our core people that stick together and watch out for each other. I feel like everybody loves this town but you can't love this town and not have a very conflicted relationship with it," says Willey. "You see all the great things that are there but can't help but see the dysfunction of it also."

While sitting around the table, the group recounts some of its favorite show memories. Bassist Geoff Naunheim, also of Grand Inquisitor and technically the "new guy" in the group, sits quietly for the majority of our talk. "We're still hazing him," the others joke, remembering their original bassist (and previous RFT Music contributor) Brian Heffernan. Naunheim and Karabell also have a new project in the works called Wild Hex.

Drummer and resident goofball John Birkner, who practically plays in more bands than any of us can count on one hand (including Trauma Harness and Shaved Women), talks beer chugs and broken cymbal stands in place of guitar solos and also regrets taking off his pants at a house show in front of the ladies.

A few drinks later, the guys all head off to their Lemp Brewery practice space to prepare for their release show. Bad Dates' first recording will debut on a split cassette tape with Indiana's Draw Blood. The release comes courtesy of locally-based label, Eat Tapes and will cost five bucks to own. Check out track one, No Money Fun, below.

We asked Bad Dates to fill in the blanks ahead of their cassette release show. Karabell stepped up to the plate with a few interjections by Birkner. Read on to see what they had to say.

What we like most about St. Louis is... Gabe Karabell and John Birkner: What's not to like? If you want your fun handed to you on a silver platter (complete with the price tag), bigger, trendier cities on the coast have a lot to offer. If you like Mad Max, riding bikes to the east side, genuine weirdness and neighborhoods that time forgot -- well, I think there's a reason that touring bands think this place is so interesting.

Our favorite aspect of being in a band is... aside from meeting awesome people, traveling, and pizza and beer, it's a real privilege to have your friends actually watch you play and get excited about the bands here. If you're reading this and haven't been to a house show in St. Louis, well... (you're) missing out.

We're most inspired by... underground music in the Midwest.

The most memorable show we've ever played in this project was... While the Bad Dates thrive at south city basement parties, the best shows have happened at our favorite neighborhood bar. There have been so many times at CBGB where it's just totally nuts and awesome. We haven't felt that kind of energy in a while. 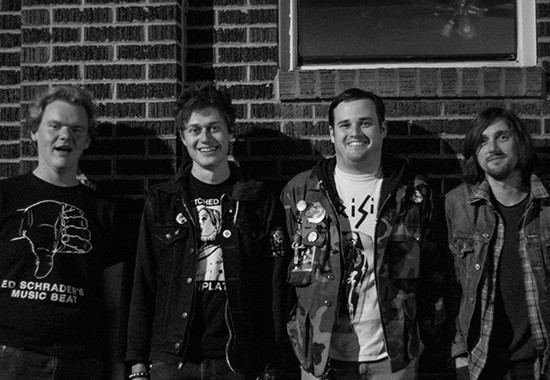 The St. Louis music scene could use... "a kick in the pants." We have a lot of talented people and awesome bands, but that's just one piece of a music scene. A lot of the folks who work behind the scenes -- booking shows, running venues and record stores, writing blogs and zines, releasing records -- go unappreciated and can't sustain the financial costs involved. So they move away or drop out.

The best post-show food in St. Louis is... You'll find us slurping slingers at the Buttery or the Kingshighway Courtesy Diner, but nine times out of ten we'll end up at John Donut on South Broadway.

Five current artists worth listening to are... Solid Attitude, Slut River, UV Race from Australia, Membrane (Zach M. shoutout!). If you get a chance to see one of Chris Sommer's projects -- Sacred Tapes, Execution Techniques or Gutterpriest -- take it.