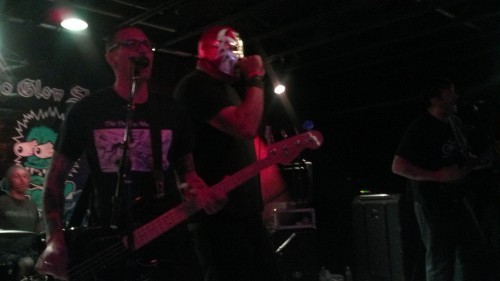 St. Louis Cardinals left fielder Matt Holliday may have rounded all four bases Wednesday night in Boston, but two bands playing back in the 314 were the ones who hit the real home runs.

Punk stalwarts Voodoo Glow Skulls and ska elders the Toasters brought the sweet sounds of success and perseverance to the Firebird -- sounds the Redbirds wouldn't hear as they fought through the first game of the 2013 World Series against the Boston Red Sox. Though it is storied entities with ever-shifting lineups -- Voodoo Glow Skulls formed in 1988 and successfully meshed hardcore punk with ska and Mexican music, the Toasters began in 1981 and was instrumental in third-wave ska pervasiveness, the Cardinals were established in 1882 and have a gazillion World Series titles and league pennants -- the bands proved that the Cardinal Way wasn't the Only Way.

Let's look at the scorecards.

Home run: Vocalist Frank Casillas led the audience in a summit of world unity. "We're going to play a song in Spanish. You guys gotta help, though. You've gotta laugh in Spanish!" And as everyone practiced their best risas during "El Coo Cooi," VGS's mascot -- a green-skinned biker-monster thing with spiky hair and eyes reminiscent of that old She-Ra villain, Mantenna -- danced around the stage, clad in a serape and brandishing a wooden scepter with a large skull on top. The mascot later returned for finale "Voodoo Anthem," holding a sign showing lyrics "Who do voodoo? We do!" on one side and "Fuck you!" on the other.

Triple: About halfway through its set, Voodoo Glow Skulls inspired the crowd to create its most violent pit of the evening. "Give Me Someone I Can Trust" was a frenzy of speed guitar and insistent horns, inciting flailing hands and kicky feet everywhere. That is, until trumpet player Mark Bush hit the breaks with a sweet solo. Bush evoked a simmering, tawdry '30s sound, slowing the tempo even more from the studio version on 1995's Firme.

Double: Knowing his audience, which was full of under-21ers who would laugh at anything poop related, Casillas shared the story behind the song "Fat Randy": "This is about a friend who got kicked out of a party. When people went to sleep, he snuck back in and took a shit on the couch." The band then launched into the song, with bassist Jorge Casillas holding one of the most wide-legged playing positions we've ever seen for nearly the entire tune.

Single: VGS opened the show with "Shoot the Moon," with Casillas sporting a red and white wrestling mask before impaling it on a mic stand as if it were "The Beast" in Lord of the Flies. Embarrassing fun fact: "Shoot the Moon" was featured in Pauly Shore's film Bio-Dome.

Fastball: '90s favorites "2-Tone Army" and "Don't Let the Bastards Grind You Down" respectively opened and closed the Toasters' relentless, sweaty set. Audience members danced nonstop, violently bouncing and flailing while proving that if you can skip, you can skank.

Curveball: Just before "I'm Running Right Through the World" began, Toasters founder Robert "Bucket" Hingley invited two young ladies clad in skeleton tights and corsets to dance onstage. This kicked off a series of stage dancers -- some better than others -- including a guy in a white dress shirt, black vest and pants, black pork pie hat and sunglasses. "John Belushi, I thought you were fucking dead," remarked Hingley.

Continue for more from the Toasters, plus the setlists.

Change-up: The crowd got a treat in "Talk Is Cheap," when saxophonist Neil Johnson and trombonist Logan LaBarbera provided the song's foundation and Hingley wrapped himself in a guitar solo. Though the band comes through St. Louis quite often, Hingley claimed that they hadn't played the song here in about eighteen years.

First pitch: Local group the Mustache Heroes kicked off the night, while California punks Left Alone performed second. Because we pregamed elsewhere to watch the Cardinals suck, we missed both bands but were told multiple times that Left Alone knocked everyone on their asses and were "the new Rancid." Even Hingley claimed, "They're the best band you're going to hear over the next few years."

Sadness: Off the charts

Dog Eat Dog 2-Tone Army I'm Running Right Through the World East Side Beat Pirate Radio Social Security Thrill Me Up House of Soul Talk is Cheap Weekend in L.A. Decision at Midnight Don't Let the Bastards Grind You Down

We're missing a song or two from the setlists. Know 'em? Let us know in the comments!