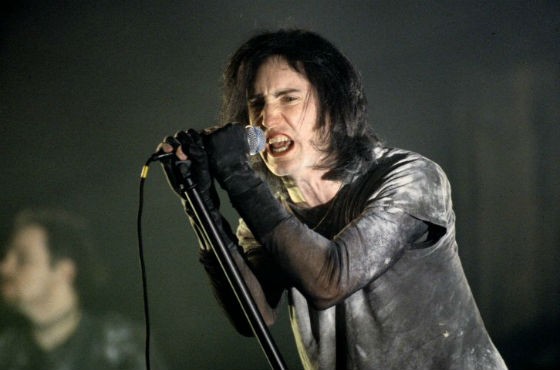 Trent Reznor sure is a happy guy these days.

In a recent interview in the Fader, Reznor is even shown as chipper when facing a root canal. Reznor's apparent changed mood is so interesting because he has faced his demons so publicly in his music. Reznor today is sober. His first Nine Inch Nails album since 2008 has received solid reviews. His recent NIN tour has gotten generally positive reviews. He's married. He has two kids. He has huge biceps. And he even won a Grammy! He's actually halfway to EGOT.

But, well, some NIN fans are a little disappointed in the new album. On NIN messageboards, there are many complaints about the happy tone of the new album. Of course, this is a little silly: Reznor is 48, and people shouldn't expect him to write the same type of music he did 25 years ago. But it's easy to see the source of the complaints. Many have noticed that "Came Back Haunted" -- Hesitation Marks' first single -- kinda sorta sounds like "Gangnam Style." And "Everything" is probably the most upbeat song Nine Inch Nails have ever released. Big Time Rush could cover it.

Regardless of how one feels about the mood of the new NIN album -- I find it fairly straightforward and enjoyable -- Trent Reznor has enough of a catalog that you can select a project of his to fit the mood you'd like. I've collected the data in a very scientific study to help you select a Trent Reznor work for every occasion.

Other notable work: The vocals on 1000 Homo DJs' "Supernaut," maybe

Common words in songs: you, just, what, want, away

The video for "Down In It" was dark enough for the FBI to investigate it as a possible snuff film.

Anger level (out of 100): 44. The The Village Voice called Pretty Hate Machine "a Human League album, except with punchier guitars." The lyrics may be those of a tortured soul, but the album is so danceable and 1980s the band even appeared on Dance Party USA.

Other notable work: Producing Marilyn Manson, the soundtrack to the 1996 video game Quake

Song titles: "Help Me I Am in Hell," "Happiness in Slavery," "The Downward Spiral," "Mr. Self Destruct," "Hurt"

When shown on MTV, "Closer" had several scenes edited out and replaced with "scene missing" cards.

Anger rating (out of 100): 94. Yeesh. Remember, he recorded Downward Spiral in the house Sharon Tate was killed in. Even the sex song is "I want to fuck you like an animal."

Continue to the next page for more NIN anger analysis.

Other notable work: "We Want It All," a collaboration with Zach de la Rocha on the album Songs and Artists that Inspired Fahrenheit 9/11.

Song titles: "Even Deeper," "Into the Void," "Starfuckers, Inc.," "The Hand that Feeds," "Every Day Is Exactly the Same"

Common words in songs: you, just me, away, where, know Representative music video:

Anger level (out of 100): 70. Reznor brings some melody to his depressing beats, making this era a little happier.

Other notable work: Closely worked with Saul Williams on The Inevitable Rise and Liberation of NiggyTardust!

Song titles: "HYPERPOWER," "Meet Your Master," "Another Version of the Truth," "The Four of Us Are Dying," and then Ghosts I-IV doesn't even have any song titles.

Common words in songs: you, your, what, just, need

This is the only one NIN released during this time period.

Anger level (out of 100): 55. Year Zero is a concept album about a dystopian future. It sounds suspiciously like Reznor's dystopian present, but he's trying.

Other notable work: The post-industrial (or whatever) band How to Destroy Angels -- a reference to a Coil song -- put out a few EPs and an album; Reznor and Atticus Ross scored The Social Network and The Girl with the Dragon Tattoo, winning an Oscar for the former.

Song titles: "The Wake Up," "Keep It Together," "Welcome Oblivion"

Common words in songs: away, fade, you, little, keep

Anger level (out of 100): 43. Reznor's getting so upbeat. His new band is so laid-back it even played both weekends of Coachella.

Other notable work: A collaboration with Dr. Dre's Beats Electronics

Song titles: "Copy of A," "Came Back Haunted," "Everything"

Common words in songs: you, just, what, copy, back

Reznor finally makes another weird video, but classes it up by getting David Lynch to direct it.

Anger level (out of 100): 13. It's not like NIN has released "Walkin' on Sunshine," but this is Trent Reznor at his happiest.