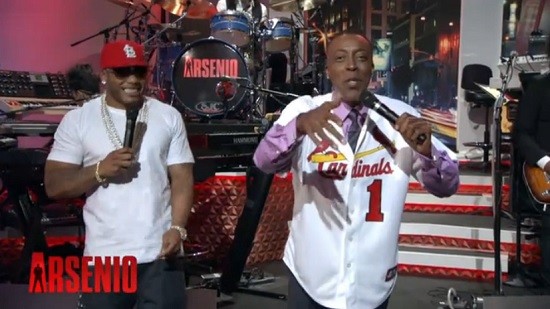 Last night, Nelly returned to the Arsenio Hall Show to collect on the bet he and Hall made on Tuesday of last week. The wager was over whether the Dodgers or the Cardinals would triumph in the recent series for the pennant: If the former, Nelly would perform his breakout hit "Country Grammar" wearing a Dodgers uniform; if the latter, Hall would perform the song, dressed in Ozzie Smith's duds.

Arsenio Hall proved himself a man of his word...well, mostly.

First, here is the video of the performance from last night:

He gave us the chorus, he's clad in a "No. 1" Ozzie jersey -- that is all well and good. But Arsenio: Where is our backflip? You distinctly said, "I'll even do a backflip" when agreeing to the bet. We can check the tape right now, in fact. Skip to the 2:40 mark in the video below.

Well, that flip never came. Now, we at RFT Music understand that Hall is nearly 60 years old, and such feats of strength and agility don't come easy to the average, non-Ozzie Smith man (we're pretty sure Smith, at 58, still backflips out of bed every morning and then high-fives all thirteen of his Golden Glove awards), but a bet is a bet. We don't care if you have to use some fancy wire-fu Crouching Tiger Hidden Dragon stuff: We want to see that backflip.

Continue to page two for details on how to take action and get a man on the TV to do a flip.

Get a trampoline. Bring a camera to a pool with a diving board. It doesn't matter how you do it. Give us the backflip, good sir! It really shouldn't be a big deal. Here, watch:

Simple! Just give us the backflip we deserve, and we'll get out of your hair. Hell, you may even earn yourself a whole new city full of fans.

St. Louis, we need to take Arsenio to task on this one. Here is his Twitter account. Tweet at the man with the hashtag #Whereisthebackflip, and let's see if we can get some justice!