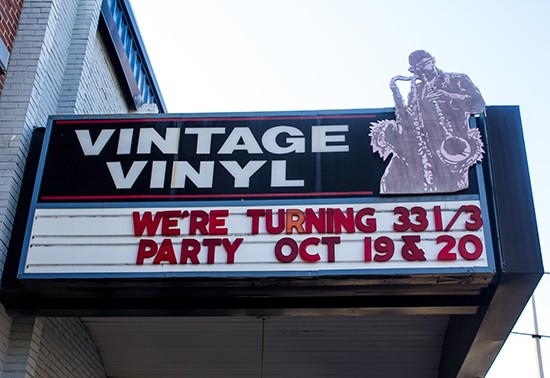 Some intel from Vintage Vinyl's marketing and promotions director Jim Utz, who has been with the independent company for 25 years, tells us that Slay's set will feature his favorite genre: prog rock -- think King Crimson, Yes and Gentle Giant. For a better idea of what to expect, check out this archived playlist from Slay's guest contribution to KSHE (94.7 FM) in 2012. County Executive Charlie Dooley will also curate a special playlist for the day's festivities, but no word yet on what it's made up of, so you'll just have to show up to see what he has in store.

Storewide sales for the weekend feature 20 percent off of used stock. A sidewalk sale on Sunday, October 20, will include dollar CDs, LPs and DVDs. Schlafly will provide complimentary beers, and giveaways throughout the weekend include CDs and more from labels including Sub Pop, Secretly Canadian and Temporary Residence.

Also on Saturday, live bands play outdoors under the marquee while DJs provide sounds inside the store. Schedule of entertainment below:

"Our statement of purpose begins with the fact that music is the healing force. Certainly, in this world, that's never been more true," says co-owner Tom "Papa" Ray. "We're looking forward to continuing to enhance the community around us."