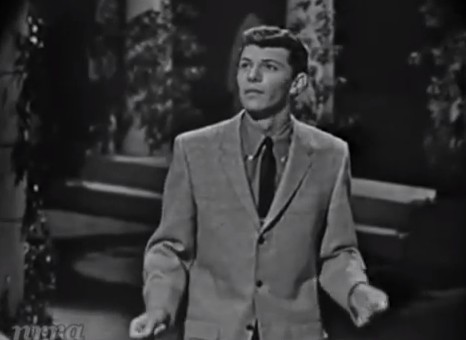 Frankie Avalon is a legend. An icon. A damn big kahuna. Even at 73, the "Venus" singer still can make the ladies squeal.

The original teen idol and surfer dude performs at 8 p.m. Saturday, October 19, at the Bezemes Family Theater in St. Charles, and we're betting that Avalon's crooning will take plenty of audience members back to the beach. Though he had a few chart-topping hits in the '50s, Avalon is known best for his '60s films with former Mouseketeer Annette Funicello that featured seaside parties and sudden bursts of song. Get a load of this:

Avalon's charming, over-the-top goofiness has spanned his career, one that includes holiday specials, family sitcoms and hamburger commercials. We at RFT Music are suckers for wholesome stars who take strange jobs for paychecks, so we've hand-picked a few projects that show off Avalon at his silliest, his dreamiest and his corniness. Cowabunga!

The sitcom that made TGIF a household acronym usually focuses on Danny Tanner's annoying kids who dress like librarians and can't spell "sarsaparilla," but the episode "Joey Goes Hollywood" hones in on how Danny's best friend and live-in babysitter finally lands a job on a TV pilot -- with Frankie and Annette Funny Jello! The pair sing Barry Mann's "Who Put the Bomp (in the Bomp, Bomp, Bomp)," and Uncle Joey delivers some gnarly mail.

A gazillion years ago, Sonic forced roller skaters to bring meat patties and tater tots to your car. Eventually, Sonic realized that the insurance for that crap was too high, and, as Avalon helpfully tells us, "Some things didn't last." He's totally lying, though! At the end of his commercial, he awkwardly delivers food to his off-screen ladyfriend while wearing skates! (Still hungry? Watch more of Avalon's Sonic commercials here and here.)

In 1978 Grease was the word, and with Frankie Avalon's helmet of hair, it's no wonder he has one of the flick's most memorable sequences. Clad in white trousers and surrounded by salon patrons, Avalon tries to keep a beauty-school dropout from continuing down a path that surely will lead to drugs and prostitution. What, that's not right?

Variety shows were all the rage in the '60s, and The Hollywood Palace capitalized on the format's appeal by employing different hosts each week. In this episode that comedian Phyllis Diller hosts, Frankie and Annette cavort on a fake beach with pop R&B group the 5th Dimension. The best part is what our twosome decides is appropriate beach attire: a yellow suit and a cheetah costume.

"Drugs can ruin a life before it really has a chance to get started." With these words, Avalon warns parents about the pressures their teenagers will face and encourages them to invite the Naval Reserve to find kids at school and church and scare them straight. Drugs are bad, m'kay?

Avalon appeared on Dick Clark's who's-who parade many times, but it was 1985 when the spectacle got really kitschy. Avalon, Fabian and Bobby Rydell -- the era's singing/acting Bronies -- celebrate Bandstand's "33 1/3 anniversary" with a few of their famous numbers. Pay attention to the audience members -- Oingo Boingo, Adam Ant, Mick Fleetwood and Laura Branigan eat that shit up!

Saturday mornings in the '80s were the best because of this weird show that seems like it would only exist in a coked-out hooker's imagination. Pee-wee's Playhouse had everything: a talking recliner, a severed genie head, Laurence Fishburne in chaps. But for Christmas one year, the show invaded prime time with more guest stars than Arsenio Hall ever had. Whoopie Goldberg, Joan Rivers, Oprah Winfrey, Magic Johnson a really, really freaky Grace Jones all visited Pee-wee's house of play. Frankie and Annette were there, too, teaching old PWH how to do some holiday crafts (around 16:40 in the clip below).

Back to the Beach

Sometimes careers really do come full circle. In 1987 Avalon and his Mouseketeer partner decided to explore seaside life once more and filmed Back to the Beach, a parody of their former beach-movie glory. This time, though, they've got two kids (including Aunt Becky from Full House!) and achy muscles. But do you know what else they've got? Guest stars! Gilligan and the Skipper! Wally and the Beav! Dick Dale! Connie Francis! Pee-wee Herman, accumulating karma! Avalon even hops onto his surfboard for some horrible green-screen action and shows the whole beach that he's still the raddest dude ever.

After the Big Crappola proves his mettle in the water, Avalon follows it up with a happily-ever-after sing-along featuring his on-screen wife, their not-at-all-embarrassed kids, the lady who wants to get into his pants and a club full of new friends.

During the film, Funicello gets pissed at Avalon and runs off to have fun without him. She turns her frustration into a song -- you know, as one does -- and dances around while Fishbone plays "Jamaica Ska." FISHBONE, people!