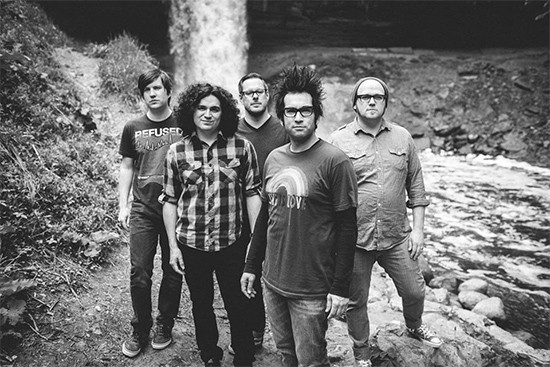 Motion City Soundtrack is a pretty rockin' band. The pop-punk five-piece has performed or collaborated with some big-time friends, including Fall Out Boy, Blink-182, Trampled By Turtles, Weezer and the Dead Girls. And in its decade-plus of nonstop touring, the Minneapolis group regularly swings by St. Louis; in fact, MCS just played Plush Sunday night and performed on the Vans Warped Tour at Verizon Amphitheater back in June.

But that's not the only reason MSC rocks. The members of the group all also very open in interacting with fans, venues and publications through social media.

We picked Motion City Soundtrack's show at Plush as one of the "Critic's Picks" in last week's print edition, also listed here as part of our "Out Every Night" blog post. RFT Music writer Allison Babka in particular wrote about the show and chatted it up on social media, to which lead singer/rhythm guitarist Justin Pierre responded with appreciation (Follow the band at @motioncitymusic or Pierre at @jcpmcs):

@AMBabka Thank you so much! -JP

Unfortunately, Babka wasn't able to cover the show because we had her reporting on the big Miss Gay America 2014 Pageant a few miles down the road (watch for that coverage later this week). The band seemed to understand, though:

The ONLY acceptable excuse.

"@AMBabka: Have fun! #STL loves you. I'd be there, but I'm covering the Miss Gay America pageant. :)"

When Babka elaborated about the pageant, something interesting happened (forgive the typos in the tweet):

@AMBabka I'm sure @atClaudioRivera knows all the words to that one. We've been looking for a good cover. -JP

It looks to us like Pierre is volunteering MCS percussionist Claudio Rivera for some Beyonce duty, no? In any case, we are taking this business very seriously, and we now patiently await a formal "Challenge accepted" from the band.

Your move, Motion City Soundtrack. We'll catch you next time you hit St. Louis -- and if you play "Single Ladies," it'll be a great day for all of us.