We don't often discuss SPORTZBALLLLLL here at RFT Music (eh, it happens), but even we know it's awesome that the St. Louis Cardinals (including some of history's sexiest) are heading to the NLCS yet again. A Game 5 win after an evenly matched, hard-earned series with the Pittsburgh Pirates tastes pretty damn sweet, and we're not the only ones who think so!

Our hometown hero Murphy Lee (@murphylee) usually closes out each edition of "Twitter Litter" with wise words, but the dude was excitedly reppin' at last night's game, so we're giving him opening honors:

We agree -- David Freese IS the shit! We love him even though he does terrible commercials for Imo's, like this one and this one.

And we're not sure if Murph filmed this during David Freese's or Matt Adams' home run, but we're sure glad he caught it:

Not everyone is as excited as Murph about a Cardinals win, though. Ben Gibbard (@gibbstack) had high hopes for the Pirates, history's perpetual underdog:

Do the Cards count as having "bloated payroll"? We don't think so, but whatever. Some of us grew up back East with the Pirates as our hometown team, so we feel Gibbard's pain. But it's still nice that the Buccos shook off that twenty-year losing streak, yeah?

Murphy Lee isn't the only local musician getting some sports action. The St. Louis Blues apparently have been playing Greek Fire (@greekfireband) during games, according to fan tweets that the band retweeted:

Can it get much better than @GREEKFIREband and @StLouisBlues in one?

Plus Tef Poe (@tefpoe) is now a Blues fan:

went 2 Blues game 2night..sat w/the team..all u can drink all you can eat..damn..I like hockey now..plus they have 2 brothers on the Blues

If sports and music keep making sweet love like this, we might have to make room in our concert tees dresser for a jersey or two. Quelle horreur!

We're delighted to learn that our buddy Nelly (@nelly_mo) is quite the nerd! And we can't help but agree with him that Man of Steel is dreck and Superman deserves better: 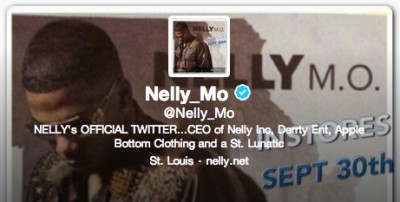 I'm I the only 1pissed that the SUPERMAN movie is the weakest?How the hell is SUPERMAN 5th behind BATMAN, SPIDERMAN , IRONMAN & AVENGERS

But then Nelly lays into fans about the merits of other characters:

"@MoneyMadi: But Superman is boring and wears all spandex so he was already a lost cause."-- so what is that spiderman and batman is wearing

"@T_trizzle1: @Nelly_Mo ironman over batman and Spider-Man!"--- yeaa but see y'all only saying that because their movies are better..!!

We never thought we'd say it, but damn, Nelly's giving us a nerdboner. It's gettin' hot in herre!

Miley Cyrus (@mileycyrus) is in the news again (Why, God, why?), this time for fighting with Sinead O'Connor on teh interwebz.

Basically, O'Connor posted an open letter to Miley on her website suggesting that she not go down a trashy path when looking for attention. Ms. Bangerz screamed "Eff you!" by posting tweets from two years ago when O'Connor was looking for help with severe mental disorders (dragging poor Amanda Bynes into this crap):

Before Amanda Bynes.... There was.... pic.twitter.com/6JZPVnunPc

And O'Connor was all "WTF? That was harsh, and I'll tell you so in another open letter! And another!" And Smiley Miley was all "Whatevs, old lady!"

Sinead. I don't have time to write you an open letter cause Im hosting & performing on SNL this week.

So if youd like to meet up and talk lemme know in your next letter. :)

And then Cyrus went on Today, and then Amanda Palmer horned in and wrote her own open letter, and then... Cripes, this is exhausting. Can we all just go to separate corners and play with foam fingers already?

We need a breather. How about some adorable children who aren't tarted up or twerking?

And the spawn of Travis Barker (@travisbarker) is wearing a Transplants shirt!

Whew. We don't predict much twerking from that one!

The 15 Most Ridiculous Band Promo Photos Ever
"Where Did My Dick Go?" The Gathering of the Juggalos' Best Overheard Quotations
I Pissed Off Megadeth This Week, My (Former) Favorite Band
The Top Ten Ways to Piss Off Your Bartender at a Music Venue