You get the idea. Corbett and his thick mane have been in demand on our TV sets and movie screens for decades. But have you ever seen him on a stage?

Growing up in West Virginia as a guitar player who feasted on classic rock, Corbett went country in 2006 with a well-received self-titled debut album. Currently touring to support his latest album Leaving Nothin' Behind (released in February), he'll hit the Gramophone Wednesday, October 9, with opener Emily Wallace, a St. Louisan.

We e-mailed Corbett a few silly questions, and he was kind enough to play along. Below, get the lowdown on his hair idol, his doughnut domination, his Twitter "obsession" and more.

RFT Music: You grew up in Wheeling, West Virginia. How did that wild, wonderful state influence your taste for and your performance of country music? (Confession: I grew up across the river from Wheeling in Bellaire, Ohio.)

John Corbett: Without Bellaire, Ohio, I wouldn't be here -- that's where my father's from! I lived five blocks from the Capitol Music Hall in Wheeling and worked there. As a teenage rock & roller, I didn't really like country music back then in the '70s, but I loved a local singer called the Wheeling Cat. Slim Lehart is his name, and he's still in Wheeling playing! He was my favorite because he wore sharp clothes and was real good-looking. Your bio on johncorbettmusic.com says that you're a KISS fan. So which KISS member or character best embodies who you are as a person?

Paul Stanley is the natural pick because of all the usual reasons: frontman, lead singer, best hair, extra-hairy chest, little tiny baby rose tattoo on arm. That's who I wanna be!

I [have been] a licensed hairdresser since 1986. Until I was about fifteen, I got my hair cut like Moe from The Three Stooges because it was just badass to be like him. Today at 52, you have to admit I still have pretty great hair. In fact, a lot of people think I must wear a wig! 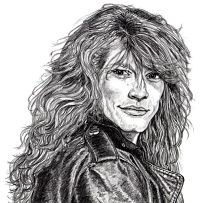 Your Twitter feed (@realjohncorbett) is almost nothing but illustrations of Jon Bon Jovi. What's up with that?

If the world needs another celebrity to send out an inner thought, then they should take to the streets and let me know, and I will tweet a picture of my feet up on a footstool or maybe a selfie with raised eyebrows, pursed lips and sucked-in cheeks. Until then it's fan drawings of Jon Bon Jovi.

St. Louis is known throughout the country for its many, many doughnut shops. Of all of the characters you've portrayed -- from Chris on Northern Exposure to Detective Demille from Street Kings to the Applebee's voiceover guy -- who would win in an old-fashioned doughnut-eating contest?

I would beat all of my characters in everything, because they are my puppets. I created them, and they only do what I say! Plus, I'm 6'5" and 235 lbs. -- no one I know can beat me in a doughnut-eating contest!