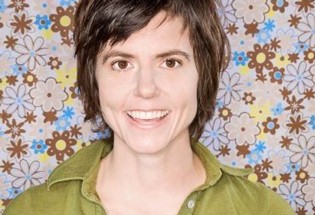 The Cardinals are in post-season play, so for the month of October the entertainment industry is going to have to get scrappy -- St. Louis has a one-track mind when it comes to baseball. This month is big for comedy in St. Louis, and it's a shame it's up against such terrible odds. So to baseball fans who like to laugh and are dynamic enough to have other interests, we'd like to plead the case for comedy: You can check the scores later, but here's no comedy show replay.

So, here goes nothing...

Tig Notaro is coming to town. I also didn't know, until someone said, "Hey, isn't that Tig person you did a video for already coming to St. Louis?" It's not been publicized, at all, but she will in fact be performing at Maryville University. The show is open the public and free. If you're not on the Tig Train, here's the 411... She's funny!

Notaro's performance last August at Largo, which addressed her recent cancer treatments, has been praised by the most respected names in comedy (such as Louis C.K.) as legendary. Since then, she's been a regular on Conan and the aforementioned C.K. sold her album exclusively on his website. Comedians give no guarantees; they are just as likely (arguably more so) to have a bad performance as any musician, actor and so on, but I'd bet on Tig putting on a show that will exceed your expectations any day.

On Tuesday, October 15, Brennan's is throwing a special show in the form of a three-floor whiskey-induced party. The bar is celebrating ten years of comedy, and it's going to be in style. With the exception of the list of sponsors, time and date, the staff at Brennan's is keeping the show details on the down-low. There will be comedy, music and obviously plenty to drink and smoke (Brennan's is a cigar bar).

The highlight of the event will no doubt be the comedian who, per Kevin Brennan, "contractually cannot be named." Who doesn't love a good old-fashioned surprise?

Karl Weizen is @Dadboner, Mike Burns' America-loving degenerate brainchild. It's an act that is so good Deadspin took the time to not only investigate the matter but inevitably unmask the man behind the story. Comedian Kyle Kinane is quoted by a Deadspin reader as stating, "DadBoner's story is all fake, but the love of bold flavors, '80s rock and Detroit Lions is absolutely real."

Karl Weizen seems to be the character traits and interests of one man, all souped-up and over-exaggerated (which is really what all comics do), only Mike Burns adopted a new personality rather than pass it off as his own. Weizen bleeds red, white, blue and cheap beer, and is the kind of guy whose scent would linger after he slept the night on your basement couch. He's got a lot to say, all of it honest-to-God bullshit and honest-to-God hilarious.

The first matter to address is Mary Mack's voice. If you're not a fan of the way grown-ups talk to children, don't even bother clicking this -- Mary Mack is not for you. It's a bold approach. She's a curious woman so in a way embodying the voice of a child is pure genius. Mack is silly as she is smart and genuinely strange.

Teaming up with Mack is Tim Harmston, a comic who spins the average into interesting just as any comic should do. His lackadaisical approach to storytelling is a much-needed alternative to the current all up-in-your face comedy trend. Harmston is soft-spoken, so he wouldn't grab your attention in a crowded room, but once you heard him, you'd be disappointed you haven't been listening to his guy all night.

Together, Mack and Harmston make an adorable duo whose comedic styles not only compliment each other but take it to the next level of hilarious abandon.

Three years ago Nick Vatterott was marked by Montreal's Just for Laughs Comedy Festival as a "break-out" comic. Since then he's defended the title by earning the Andy Kaufman award in 2011, landing a Comedy Central Stand-Up Special and a variety of performances on the late-night television circuit. A bunch of awards and recognition from comedy festivals you've likely never heard of doesn't guarantee funny, but it does prove the capability of making people laugh.

Vatterott is a dynamic comic; he has worked with Second City, so he has got more than just jokes under his belt: He has a hat full of comedy tricks that will lead you in more than one direction but won't lose you along the way.