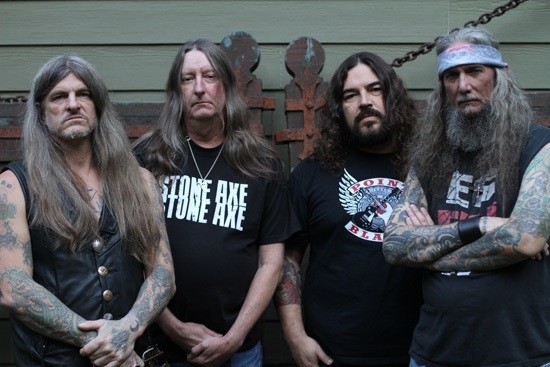 We'd wager that no one under the age of 40 has probably ever seen Saint Vitus in St. Louis. The last time the group was in town dates back to 1984, at a boxing club called Turner's alongside another struggling little touring band called Black Flag. For those with that unwanted "Over the Hill" gag birthday card in the closet, this was a blast from the past. But for most of the young folks in attendance this was a chance to see a doom metal legend live and in the prison-tattooed flesh.

Kicking things off was local favorite, Fister, whose ominous and haunting dirges were a perfect companion to the first chilly night of the fall. The band's three members flooded the room with sound, bobbing heads and shattering dreams note by note until the eerie climax of "Antitheist" brought the set to conclusion. Next up to the stage was the Hookers from Louisville, Kentucky. The stage at the Firebird instantly shrunk several sizes as four larger-than-life Sons of Anarchy cast member look-a-likes hijacked the stage with blazing, blistering rock & roll. The band raced from song to song like a Kiss record played on the wrong RPM as the audience was repeatedly confronted with the challenge of being "ready for Saint fucking Vitus."

Ready we were, but not before being carried to the grave by the doom anti-heroes of Pallbearer. Having played the Firebird back in May with Boris and also as recently as two months ago with Fister, the band reports that it's been playing St. Louis more than its hometown of Little Rock, Arkansas these days. That old familiar feeling might have been what prompted the band to play at least two new, vocal-less songs in addition to familiar epics from it's Profound Lore debut, last years Sorrow and Extinction. Following a lengthy intermission, people sardined themselves up to the front of the stage in anticipation of that band from the documentaries they've seen, that band every other band they like has talked about in interviews for years, that band their weird coke-head uncle had in his cassette deck when he got arrested: the one and only Saint Vitus.

Fuzzy distortion, feedback, and a colorist's wet dream of grey hair dominated the stage as Saint Vitus brought the room back to drunken life. Drums were smashed, guitars screamed exclusively from the neck pick up and vocalist Scott "Wino" Weinrich brought the Sabbath-influenced doom rock as if he were Ozzy's own wide-eyed tweaker nephew. Whiskey bottle in hand, Wino led the crowd through all the classic Saint Vitus tunes including "I Bleed Black" and "War is Our Destiny." Guitarist and founding member Dave Chandler ran from side to side of the stage and eventually floor, actively "banging the head the does not bang" by grabbing audience members by the scalp and using their foreheads as a key part of his solos. After a dozen or so jams, drummer Henry Vasquez took the mic for a very Macho Man Randy Savage intermission, giving the past midnight on a Sunday crowd a quick slap in the nuts before calling the rest of the band back to the stage for an encore. Concluding the music for the evening was the band's 1986 fan-favorite "Born Too Late," after which the members ponied up to the bar and spent the whole night talking with fans.