Why Is Rave Fashion Such a Disaster? 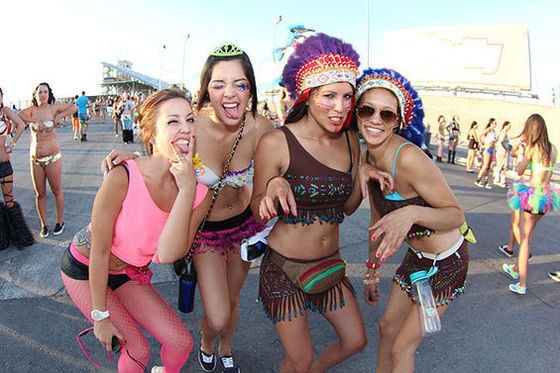 Traditionally, raves are a place where people can be free to wear whatever they want. That's great! Except, not really, because they also make horrible fashion mistakes acceptable. And so you see Rastafarian colors mixed with nipple pasties mixed with Hello Kitty gear and tutus. You see Hindu symbols mixed with Native American headdresses, fuzzy boots and neon. And somehow people manage to be naked on top of all that.

Below, we run down some specific raver fashion faux pas and tell you how to fix yoself.

At raves these days the sexualization of beloved children's cartoon characters is in full effect; everyone from Minnie Mouse to Mario and Luigi is getting the "sexy" treatment. (No, seriously, we've seen this.)

We're glad you have a great bod, but putting the faces of animated icons on your ta-tas sends a confusing message.

Maybe you were into wearing Hello Kitty tees as a toddler, but doing so in bikini form just makes it look like some perverted fantasy.

There's a way to do this that's a bit more discrete. Check this outfit out. It says, "I'm whimsical and fun" and leaves it at that.

This look is characterized by guys who wear bow ties along with outrageous T-shirts or tank tops, with messages like "Show Me Your Tits."

We call this "ho promotion" -- guys encouraging girls at raves to bring out their inner skank. This is quite douchey, obviously, and it's also a total sartorial fail.

Beyond the bow ties and T-shirts, the look often includes Speedos, suspenders and board shorts -- usually drenched in neon.

We actually don't mind the bow ties, but the neon and the crass messages on the shirts have to go. Don't you want to find a nice, classy rave girl to bring home to Mom?

Everyone by now has seen the clueless hipster in the Native American headdress. They're worn everywhere from EDC to Coachella, by men and women alike, and they're culturally insensitive, to say the least.

Throwing on a feathery headpiece doesn't show you're a "free spirit." It just makes you look like you don't have any respect for Native American culture. And when the whole thing is sexualized, it's even dumber.

If you really need to wear a headpiece, how about something like this?

See also: The 13 Most Hardcore Ravers at Ultra

The Rastafari movement rejects materialism, and it seeks a higher spiritual awareness through the use of marijuana.

While for some there's a spirituality to EDM, for many people it revolves around the sensory pleasures of dance-floor thrills.

Wearing Rasta colors while you're dancing to dubstep, then, is ridiculous, and combining it with kandy bracelets is really hard to look at.

If you're going to wear red, green, black and gold, that's fine; just don't combine it with neon pink.

Hinduism and Buddhism are ancient religions that have brought peace and enlightenment to many. They also have nothing whatsoever to do with EDM. Same with Navajo prints and, um, spirit hoods.

If you must wear an "Om" amulet, at least have the decency to sit down cross-legged and meditate during hard-hitting trance sets. (Just kidding: Please don't wear Om amulets.)