Out Every Night: The Best Shows in St. Louis From September 30 to October 5 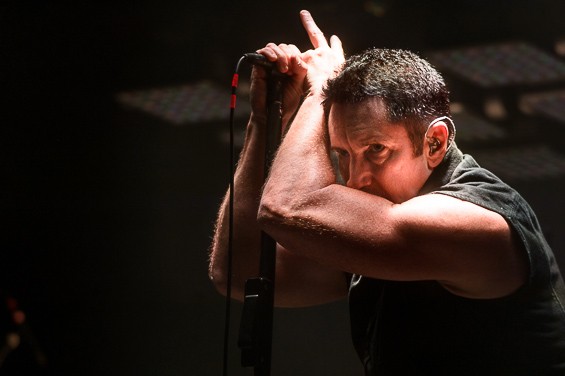 This week, check out Geto Boys, featuring the author of our recurring column Ask Willie D, check out Ransom Note's CD release show, get a load of the one and only Nine Inch Nails and much more. This Monday's looking pretty gray. Spruce up your week with the following show recommendations.

Lord Dying Monday, September 30, 8 p.m. w/ Thanatos Eternal, Cathedral Fever, Death Horse, Decay Crawler @ Fubar - $8-$10 By Rick Giordano From this July 2013 show preview: Portland, Oregon's Lord Dying are the most recent addition to the legendary Relapse Records roster with a debut album hitting stores on the ninth of this month. The band has only previewed two tracks from the forthcoming Summon the Faithless so far, but they're two that show promise, filled with Baroness-esque (say that four times fast) riff-rock mixed with a dark aggression reminiscent of more recent Celtic Frost and Triptykon.

Nine Inch Nails Tuesday, October 1, 7:30 p.m. @ Chaifetz Arena - $37.50-$99 By Jaime Lees After threatening to put Nine Inch Nails to bed a few years ago, Trent Reznor is back with a new album, Hesitation Marks, and a new tour. As the only original and full-time member of the band, Reznor is credited with bringing industrial music to the masses with massively popular genre-bending albums like Pretty Hate Machine and The Downward Spiral. He's been at it since the late 80's and, traditionally, Nine Inch Nails albums are written and recorded solely by Reznor, who then assembles a cast of talented musicians to translate his music for live performances. Reznor's creative output, combined with inventive marketing campaigns and highly-publicized collaborations (David Bowie, Marilyn Manson) has helped him to build his own brand and personal myth as a respected but mysterious genius.

Richard Buckner Tuesday, October 1, 7:30 p.m. w/ Union Electric, Dan Johanning @ The Demo - $12 By Christian Schaeffer Richard Buckner's stylistic dye has long been cast, it would seem. The folk singer can move from Crazy Horse discursions to his usual format of intimately picked acoustic music and still retain his central spark and delivery. So it's true that his latest, Surrounded, sounds very much like a Richard Buckner record, though working with producer Tucker Martine (Decemberists, Camera Obscura) reveals a more experimental impulse. A pulsing ambience and some looped percussion help fill out "When You Tell Me How It Is," and the melodica solo almost makes Buckner sound like a one-man Calexico. Locals the Union Electric will open the show; the band will likely be dipping from its newly released covers EP, featuring the songs of Neutral Milk Hotel, the Ex, and more.

Humdrum Thursday, October 3, 9 p.m. w/ The Vanilla Beans, Paperhaus @ Schlfaly Tap Room - free By Christian Schaeffer From this 2013 EP review: For Humdrum's latest EP, the band booked time with Steve Albini in his Chicago-based Electrical Audio studio. This fact alone could overwhelm the conversation about the record, but Albini is a famously egalitarian and workmanlike producer. If you book time with him and get on the studio calendar, he'll record your stuff. So his name is less a stamp of approval from one of rock's most famous producers and personalities and more a comment on Humdrum's willingness to throw a good amount of time and money at this project. (To further the EP's analog pedigree, it was mixed at John Vanderslice's Tiny Telephone studio and mastered to stereo tape.) I haven't heard the vinyl version of We Are Electricity, but even the mp3 versions show a more mature use of space and a focus on a few key tones for a band that has previously suffered from a little bit of sonic A.D.D.

Ransom Note CD Release Friday, October 4, 9 p.m. w/ The Jungle Fire, Plaid Dragon @ Off Broadway - $10/$13 By Christian Schaeffer From this 2011 album review: Punk rock is fast and visceral, seen as the raw, beating heart of real rock music. Soft rock is syrupy and sentimental, the provenance of elevators and checkout lines. But all the Yacht Rock jokes and ironic Michael McDonald impressions don't erase the fact that the hallmarks of soft rock aren't at all easy to replicate. Those gossamer, diaphanous keyboards, featherweight rhythm sections and expertly layered harmony vocals took precision and expert ears. Sing along to a Peter Cetera-era Chicago song or try to play along with a Steely Dan chart, and you'll know the feeling. Ransom Note isn't a soft-rock band, exactly, but the local quintet certainly has a soft touch on its debut, It's You! The album cover, consisting of a single red rose, even recalls those K-tel comps of '70s AM Gold that litter the dollar vinyl bin. But under the direction of singer and lyricist Merv Schrock, this band of scene vets (including Sherman S. Sherman on bass and brothers Ben and Jon Parsons on guitar and piano, respectively) paints a gentle picture in broad, pastel-colored strokes.

Dr. Dog Friday, October 4, 7:30 p.m w/ The Lumineers, Nathaniel Rateliff @ Chaifetz Arena - $25-$39.50 By Roy Kasten Imagine a world where all the people of all our lazy stereotypes -- the hippies and the hipsters, the punks and the poets, the indie kids and the dad rockers, the folkies and the funkies -- come together as brothers and sisters and let one, great, tattered freak flag fly. Emblazoned on that banner is the name Dr. Dog, and its world, damaged by Dylan and saved by the grace of the groove, is a place where cranky vocals and surreal storylines can be transformed into soul music. The members of Dr. Dog don't care what you label them. These Philly philistines just want to move your ass; your mind really will follow. Missouri native (Herman, Missouri to be precise) Nathaniel Rateliff kicks off this triple bill, headlined by the overrated but often enjoyable stomp-folkies the Lumineers. Arrive early; stay late.

Quasi Saturday, October 5, 8:30 p.m. w/ Jeffrey Lewis @ Off Broadway - $15/$18 By Christian Schaeffer On the twentieth anniversary of its first demo cassette, the endurance of Quasi as a viable band and underground mainstay has long surpassed understanding. Sam Coomes and Janet Weiss failed as a married couple but dominate as a riff-heavy duo with no use for modern trends and no sign of getting quieter with age. For the just-released Mole City, the pair laid down 24 tracks, including lead single "You Can Stay But You Gotta Go," a bassy, distorted sludge bomb that rights itself before careening off the walls. Coomes' wry delivery and winning ways with discord on both guitar and piano are matched by Weiss' sweetening harmonies and powerhouse drumming, which fans of Sleater-Kinney and Wild Flag know like their own heartbeats. Celebrated comic artist and singer-songwriter Jeffrey Lewis opens the show with charming, acoustic geekery and probably a Crass cover or two.

Kenshiro's Saturday, October 5, 9 p.m. w/ SW/MM/NG @ The Heavy Anchor - $5 By Mabel Suen From "Fill in the Blank: Kenshiro's": Named after the savage and powerful lead character of classic anime, Fist of the North Star, Kenshiro's packs a corresponding wallop with its raw and relentless garage'n'roll. Simple yet powerful chords shakily traipse between strummed and stabbed motions, and the boomy rhythm section holds down frontman Prato's howls and squealing guitar licks as they attempt to fly away in an electrifying frenzy. The self-described "basement punk for the unworthy" provides with upbeat, dance-worthy songs generated from youthful souls.