The Ten Best Shows in St. Louis This Weekend: September 27 to September 29 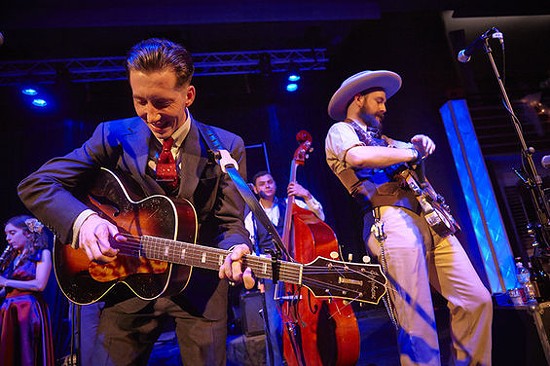 The Best of St. Louis issue hit newsstands this week, and a collective sigh of relief after the chaos of annual assemblage utters itself from the RFT offices. Pick it up to see some fun recommendations from our staff and contributors, including plenty of music picks.

See Also: The Best Of St. Louis 2013 Music Winners Speaking of which, here's a selection of things we think look interesting for the weekend. Fall festival season features performances all over town including the Taste of St. Louis, the Saint Louis Folk and Roots Festival, and the Rock U Fest. Quaere Verum, the Vanilla Beans/Superfun Yeah Yeah Rocketship and Brothers Lazaroff all release new recordings. See the fine print to get a load of 'em.

King Tuff w/ Dad Jr @ Off Broadway 8 p.m. | $10-$13 Sub Pop's King Tuff and Dad Jr.'s Mister Hands, together on one show in a battle for the "most entertaining musical lunatic" award, this Friday at Off Broadway! Sure to be a rowdy one. (DH)

From our other weekly list of local show recommendations, check out Cody ChestnuTT and Supersuckers on this evening as well. Also on Friday, the Vanilla Beans and Superfun Yeah Yeah Rocketship release a new split and Quaere Verum releases its debut album. Click on the links to learn more.

Hanni El Khatib w/ Bass Drum of Death, Boreal Hills @ Plush 9 p.m. | $13-$15 Will the Guns Come Out by Los Angeles' Hanni El Khatib ranks among my favorite CDs that I found in the office when I took the helm at RFT Music. It is good -- really good -- but don't take my word for it; check it out for yourself. (DH)

Ashborne Concert to benefit the Down Syndrome Association of Great St. Louis @ Off Broadway 8 p.m. | $10-$13 A plethora of great bands, a cheap admission price and a wonderful cause! (DH)

Rock U Fest 2013 w/ The Advocates, Out of Sequence, River City Sound, Revence, Divine Sorrow, many more @ The Demo 2 p.m. | $10-$13 The Demo and Atomic Cowboy play host to 12 straight hours of music including 20+ bands on two stages (click here for the full line-up). Donate an instrument and get in for free. A portion of proceed benefits Play it Forward, an organization that helps underprivileged kids reach their artistic goals. (MS)

Lord Snow w/ My Dad, Red Squad, Laika @ Foam 10 p.m. | $5 We just named Foam the best live-music venue in town this year. Check out our recommendation firsthand with a rousing rock show featuring two bands from the Windy City, Lord Snow and My Dad, supported by a couple of local power trios. (MS)

Ahleuchatistas w/ Yowie, Gnarwhal, Good Luck at the Hog Slaughter @ Schlafly Tap Room 9 p.m. | free Yes, both of the proprietors of the Wrong Division radio show on KDHX work here at the RFT. No, our inclusion of this show (which is the 5 year birthday of WD) is not a case of nepotism; it is one of giving props where they are due. Come out, get weird with other weirdos and high-five Joe and Mabel for their five years of hard work! (DH)

Also on Saturday, consider the Brothers Lazaroff CD Release block party and a Rock and Rollerskating party at the Skatium. On Sunday, Bassnectar stops into town.