On Saturday, September 21, RFT Music got word that St. Louis poet Ken Brown had passed away from liver failure. The prolific artist leaves behind a wealth of work and was highly influential in St. Louis' poetry scene. As such, we reached out to Joseph Sulier, well known for helping found the Get Born series of poetry readings in St. Louis, and asked him to write a memorial for his mentor and friend.

The first words I ever heard uttered from Ken Brown's mouth, through a landline answering machine, were the perfect introduction to a man I would grow to befriend and admire: "Listen kid, I don't know who the fuck you are, but I think you might like to know who I am!" This was followed by the signature click of his landline receiver hitting the dial, which marked the end of every voicemail I would receive from then on, all of which I would go on to save due to either their comedy or poignancy.

I had just embarked on my first poetry reading series [Get Born], and due to my lack of connections and freshman status as poet I was in dire need of readers and participants. Matthew Freeman, another local poet of note and dear friend to Ken, insisted I contact him. "He's been published alongside Bukowski; you've got to check him out!" I called the number I'd been given, left a message and received the aforementioned taunt in response.

When I called back, a two to three hour long conversation ensued, during which I was berated, consoled, questioned and mocked. Ken would later say to me that the fact that I had been able to suffer his ranting in that initial conversation meant I was worth my salt. He had a screening process that many failed, but those who prevailed were welcomed into the warmest of friendships a person could ever know. 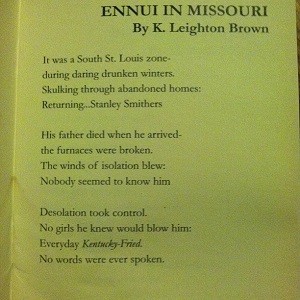 Ken was many things to many people -- accomplished poet, abrasive drunk, wise mentor, ham, cut-up, difficult lover, world traveler -- but to me Ken embodied two things: total and sincere fearlessness (he would often grab your hands and force you to look into his eyes so you could feel what he was feeling, so you could have a real human connection, and sometimes those eyes were welled up with tears), and the truest definition of friendship (he was never afraid or ashamed to praise you when you had shown guts or talent, and equally unafraid and unashamed to scold you when you had lacked the two).

His stories were incredible. He once lived with a one-legged prostitute in Morocco, started a business called Karma Cards in Australia (which netted him around ten grand that he would subsequently "piss away"), got kicked out of Australia for outstaying his work visa, lived on a boat in Marina Del Rey, California, where he was a professional dog-walker, and ultimately returned to his home of St. Louis after his younger brother took his own life (Ken was the last to talk to him, and his suicide would come to haunt Ken deeply for the rest of his years). Back home he was a self-described "plant man." Brown would make the rounds to a route of office buildings in his car every day to tend to and nurture their neglected plant life, a job which he had recently quit but which suited his nature, caring for the afterthoughts of a cold environment of capitalism and industry. I would often fancy him talking to the plants, reassuring them that it "wasn't as ugly as all that," that they still had him, that he still cared.

As an artist, Brown was prolific. If you were lucky to be close to him you were never allowed to forget that he had been published "61 times," including in a volume alongside one of his favorites, Charles Bukowski. He had a penchant for showmanship. "You always wanna leave 'em wantin' more." The man knew how to deliver, how to please and how to alienate, all at will according to his mood. He had his hands in stand-up comedy, live theater, poetry, visual arts and singing (friends were often forced to sing Dylan, the Beatles, or Pink Floyd at least once, and either self-consciously sober or reproachably drunk). He would read to whomever would have him whenever they wanted him and would never disappoint; he knew his role as performer and took it on with a deadly seriousness. He was also polarizing, no matter what facet of the St. Louis poetry scene you came from you knew who the guy was, whether through infamy or renown, and you either loved or detested him. And even if you felt the latter, you had to cede a certain amount of respect in spite.

Ultimately, though, Ken was a man plagued by demons. Demons of lost loves, lost relatives, lost friends and lost youth. These demons led him, like many other profound artists who were gone too soon, to alcohol, and though it will be weeks before the official results are in from the coroners the cause of death is believed to be liver failure as a result of alcoholism, claiming the life of a man that those of us he left behind are angry to have lost. Angry because, goddamnit Ken, you had IT and you fucking blew IT! (I can picture him saying something similar had it been my deathbed and not his, his eyes glossed with tears, his mouth wrinkling into a frustrated sneer, his fists balling up til the knuckles are white. "Sonnn of a..BITCH Suh-lee-a!").

The only phrase I can find fitting enough to leave you with is a phrase which Ken was wont to say to friends, a phrase he would never let you forget, and a phrase which he would fiercely defend.

"You'd best remember who your friends are."

Memorial services for Ken Brown will be held 1:30 p.m. this Saturday, September 28 at Kutis Funeral Home (2906 Gravois Avenue). Check the Facebook event page for more details. Continue to the next page for videos of Brown's poetry readings.