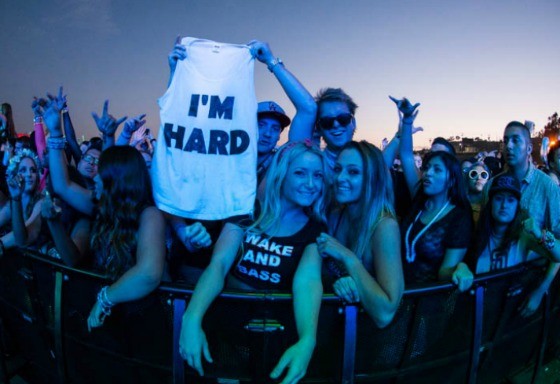 Gentleman, this is a public service announcement. We know that things can get hot and sweaty on the dance floor. The atmosphere is festive, the music is peaking and the ladies are looking good. You see one you like, and you want to dance with her. Totally cool. Men and women have been dancing together for thousands of years. It's nature. But there's a right way and a wrong way to go about this, and a lot of you are doing it the wrong way. R. Kelly may have said that there's nothing wrong with a little bump and grind, but you have got to stop putting your boners on us.

See Also: The 13 Most Hardcore Ravers at Ultra, in GIF Form

We're calling this move the "boner sidle." Ladies, you know we're talking about, and you may have even experienced it. You're dancing in a crowd when you realize that a dude, typically a young shirtless lad wearing lensless novelty glasses, has sidled up behind you and is fixing to dance. Except instead of actually dancing, he just stands there like a sequoia, his laser-beam stare penetrating your pants. It's killing your vibe and distracting you from the music. The guy has officially entered your personal space.

At some point the dude makes his move and puts his hands on your hips. In no way did your body language suggest that you wanted him to do this, although it's possible that he's mistaken your enthusiastic shuffling for an open invitation to touch you. (Not the same thing!)

He then takes the liberty of moving in closer and putting his frontside against your backside. You're basically immobilized, and this is when you realize that he's got a boner and is pressing it into your ass. He's not even really dancing; he's just standing there...with his boner on you.

This happens to women all the goddamn time at dance shows, and it's annoying, awkward and gross. We've even heard an anecdotal account of a guy who takes Viagra before going out, specifically to do this.

So what should you do?

We find that the best line of defense in these scenarios is to turn around, look the guy directly in the eye and tell him you need your personal space, or that you'd prefer to dance with your friends.

If the guy is especially thickheaded, you might have to separate yourself or physically move his hands off you. It's also cool to just tell him that's it's not OK for him to touch you without your permission. No matter your tactic, upon disengagement, the guy will usually stand there for ten to fifteen seconds and then just walk away. If he doesn't, move to a different part of the dance floor; you don't need a lurking boner affecting your fun.

Gentleman, listen: We don't know where you learned the boner sidle, but know that it's a frat party throwback that is both territorial and uninspired. You're throwing off our balance by holding our hips like that, and who said you could touch us, anyway? It's not even a fun way to dance. Oh, and we don't want to feel your goddamn boners near our butts.

There are so many legitimately charming ways to approach a woman on the dance floor. Try any of these: Smile at us! Make eye contact! Bust some moves! If you wanna dance, guys, let's dance. But let's do so in a fun, mutually beneficial way that involves more actual dancing and less of you creeping up behind us and attempting to stake territory with your genitals.