Out Every Night: The Best Shows in St. Louis From September 23 to 29

Some weeks overflow with shows, so much so that it's hard to know where to start. The following list highlights just a few of the goings-ons this weekend. Be sure to stay tuned to our Weekend Best Bets post for more than a few recommendations. For now, check out the following to get an idea of what's in store this week, including stops in town from Cody ChesnuTT, Ruidosa Immundicia, Darto and more. 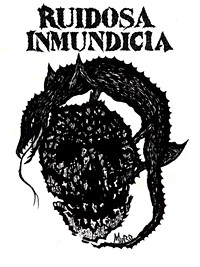 Ruidosa Immundicia Monday, September 23, 9 p.m. w/ Potty Mouth, Violations, Life Like @ Blank Space - $5 By Jimmy Eberle From "The Best St. Louis Punk/Hardcore Shows: September 2013": All the way from Vienna comes Ruidosa Inmundicia (yes, the band from Vienna that sings in Spanish because the singer is from Chile) to rip your head in half with blisteringly fast hardcore. This band is extremely pissed off, and it shows. Violations probably is too, after having to take a break from the limelight over the past year. Don't worry though, the band has a new line-up and an alleged demo finally in the works. Also, Life Like will spit blood and kick toward your groins. Come worry what you're doing with your life with the rest of us, in a basement.

Darto Tuesday, September 24, 8 p.m. w/ Tone Rodent @ Billiken Club - $5 By Mabel Suen Darto hails from Seattle and plays languid, grunge-tinged post-rock, driven by buzzing bass and guitar chords that burrow themselves forcefully into heads and weigh heavily on the chest. Impactful repetition gives way to fleeting guitar squeals and moaned vocals, creeping out from the resonating drone. Somber passages reach brief melodic resolve only to delve directly back into sections of powerfully dark dragging and lagging. The trio is presently touring on its just-released album, In Difference. Locals Tone Rodent augment the bill with their own brand of spacey psych-rock.

Tree Blood w/ Man Control, What We Won't See, The Funs, Eric Hall Wednesday, September 25, 8:30 p.m. @ Blank Space - $5 By Joseph Hess Decidedly missing a discernable low range, Minneapolis duo Tree Blood fills in space with squalor. The wildly saturated sound of a crunchy six-string grinds over top-heavy drumming while the off-kilter sing-song vocals rub up against classy melody, making for warm psych-punk and moving each song along before burning out into some space odyssey. Each succinct song comes followed up by excess guitar squeal made trippy through pedal magic. Without leaning too far in either direction, hippie or hipster, Tree Blood brings a blend of fervent punk rock that could only be born in a landlocked state like Minnesota. Mancontrol from Memphis joins Tree Blood on this bill, building circuit-bent dance songs through photo-optic cells and audio looping.

No Monster Club Thursday, September 26, 9 p.m. w/ M. Sord, Sleepy & the Bedtimes, Falsetto Boy @ The Heavy Anchor - $5 By Mabel Suen No Monster Club's latest music video features a dog lip syncing lyrics out of a driver's side window against a green screen. The silly indie-rock band based out of Dublin plays fun, jangly tunes that merit the use of such playful sight gags. The Dublin-based trio channels poppy garage rock, the sunny disposition of the Beach Boys and a long list of other influences including Daniel Johnston, the Polyphonic Spree and Neutral Milk Hotel. Armed with psychedelia and feel-good '60s-style bubblegum pop, No Monster's Club's tunes are bound to bring out the goofball in you.

Cody ChesnuTT Friday, September 27, 9 p.m. @ Blueberry Hill - $15/$20 By Roy Kasten Cody ChesnuTT has no one to blame but himself for his fall from critical and popular favor. Shit happens when you record a debut in your bedroom, title it The Headphone Masterpiece and then live up to all the bravado in sound, song and vision. Part Prince, part Terence Trent D'Arby and part Curtis Mayfield, the Atlanta-born auteur raised expectations for the kind of career his influences have had. But a decade passed and ChestnuTT never quite made it, though his sole, full-length follow-up to Masterpiece, last year's Landing on a Hundred, sounded smart, funky and at peace with his not-quite-retro, not-quite-experimental muses. Don't count Cody out just yet.

Supersuckers Friday, September 27, 8 p.m. @ Fubar - $12-$15 w/ Hellbound Glory, The Browncoats, SVK By Jenn DeRose Hillbilly-punk legends the Supersuckers and St. Louis are a match made in the dive bars of heaven. There are marks of country-life all over our city streets, from oversized mud-splattered trucks careening down narrow alleyways to our penchant for donning sweatpants in public. We embrace our trashiness, and so do the members of the Supersuckers. Comradery with the average 10-gallon hat wearin' whiskey-swillin' workin' man is a hallmark of the band's aesthetic; most songs are about fighting, drugs, booze or vehicles. How many other punk bands lovingly mention Ford and Chevy by name in their lyrics? Frontman Eddie Spaghetti and his crew have even been known to work the merch booth themselves and shmooze the crowd all night, immersing themselves into the Dionysian party that is the Supersuckers live show.

Brothers Lazaroff CD Release Saturday, September 28, 12 p.m. @ Vintage Vinyl - free By Mabel Suen From "Fill in the Blank: Brothers Lazaroff": Brothers and best buds David and Jeff Lazaroff have the type of close-knit relationship that all siblings ought to aspire to. The duo has written songs together on guitars since their high school days and officially began playing under the name Brothers Lazaroff around 2003. For the past five-and-a-half-years, the brothers have made local musicians Grover Stewart (drums), Teddy Brookins (bass) and Mo Egeston (keyboards) part of their extended family. Influences for the brothers include everything from Bob Dylan and Lucinda Williams to Wilco, bluegrass and dub reggae. While difficult to pinpoint Brothers Lazaroff's singer-songwriter-based sound, which melds everything from psychedelic rock and acid jazz to soulful Americana, it's safe to call it roots music.

Rock and Rollerskating Saturday, September 28, 9:30 p.m. w/ Maximum Effort, Earring, Massive Ego, Skymaul, The Funs, Doom Town @ St. Louis Skatium - $8 By Joseph Hess From "Punk: Meet the 2013 RFT Music Award Nominees": This conspiracy-rock for cautious punks tears through notions of well-being in our river city. Frontman Zeng belts out vocals like a sideways preacher, gasping for air between words telling of the shadow government and imparting cautionary tales that feel like dangerous anthems. Striking guitar riffs drive alien conspiracy theory with a damaged vehicle. Maximum Effort asks you to heed its call -- after all, this is not a band; it is an awareness group. Behind the curtain is a revelation, an enlightenment built on power chords and feedback. Maximum Effort feeds our fears with what could very well be the truthiest of truths.

Bassnectar Sunday, September 29, 8 p.m. @ The Pageant - $30-$50 w/ Amp Live, Andreilien (Heyoka) By Christian Schaeffer From this 2011 show preview: When you name your musical outfit Bassnectar, you'd better have the feel-good vibes (and the low-end) to back up such a ridiculous moniker. Thankfully, the act's DJ, beat-wrangler and all around party-starter Lorin Ashton embraces the sort of musical pantheism that breaks down borders and gets bodies moving. For the indie snobs, he can toss in Beatles licks or Pixies bass lines -- and for the club kids, the sheer amount of bass and squelching synthesizers is enough to trigger visions of glow sticks. Add a few hip-hop verses, continual tempo adjustments -- and the emotional catharsis that happens when a thousand strangers move as one -- and Bassnectar's mass appeal is no mystery at all.