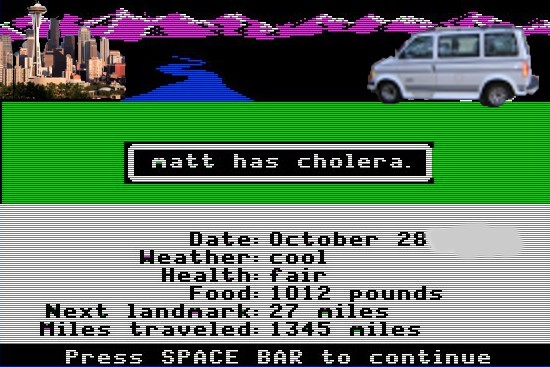 MECC's elementary school computer lab classic The Oregon Trail probably taught its users relatively little about American History. The lasting impression the game did leave was the idea that choices have consequences and that, sometimes, bad things just happen, regardless of how well you plan for them. When you lost those oxen by deciding to ford the river rather than take the ferry (a test to see if you understood that, on four legs, oxen are only about four feet tall), that was on you. But there was very little you could do about that dysentery epidemic later on.

Oregon Trail was a simulation of people setting out into a world that was arbitrarily cruel and attempting to overcome it. That basic design element of Oregon Trail can be applied to a game that simulates something relevant to this blog: the life of a relatively unknown touring indie band.

The same pioneer spirit can be found in a band setting out into the unknown on its first tour. Many risks and uncertainties await, but so does the potential for success. In the following design document, I will outline the fundamentals of making such an Oregon Trail-like game revolving around the lives of touring musicians.

In the original Oregon Trail, only the occupation of the player character was important. This game instead takes an approach similar to RPG games like the original Final Fantasy in crafting a five-person party from the following character classes:

The slacker: Consistently broke, no one is actually sure how he manages to sustain his lazy but leisurely life of avoiding work as much as possible. His primary commitment is to the scene, and people view his rejection of social norms in favor of following his passions as endearing. His draw is generally 19-year-olds who are insistent on never ever selling out.

The BoBo: Short for "Bohemian Bourgeois", the BoBo comes from a privileged background and was brought up being exposed to a variety of culture which helps him add a layer of sophistication to the band's image and draw out more refined audiences. He is not arrogant about his upbringing and views his bandmates as equals.

However, he lives in constant fear of another BoBo who went to the same prep school as him outing the extent of his privilege on Tumblr and possibly killing the band's credibility.

The Virtuoso: A classically trained musician who views being in the band as an escape from the rigid dogmatism of the institution. However, he often comes to the conclusion that his bandmates' approach to writing music is trite and uninspired. Whenever he contributes ideas, his non-Virtuoso bandmates think they are too weird.

The Virtuoso draws similarly minded music nerds, often drum majors, who are obsessed with irregular time signatures and changes in modality. He listens to John Cage and gamelan ensembles when he drives the van. Most of his bandmates think this is weird, but the BoBo, being a natural consumer of culture, seeks to understand it.

The Working Stiff: These kinds of people are oftentimes unable to play local shows because they can't get the time off from their soul-crushing part-time jobs. The upcoming tour may guarantee that they won't even have that job when they return.

Their draw is often limited because they commit more time to trying to pay rent than being scene celebrities, but sometimes they use music as an efficient outlet for their pent-up frustration, cultivating an angry mystique that can seem captivating to those who don't know that they work at an ice cream shop.

The Merch Guy: A young person, eager to step their rep up in the scene, who views going on the road with the one band that managed to get out of this crummy town as a unique privilege. Band members generally view him as an extra source of tour funding and a person who will carry things when they don't feel like it.

Over time, he will discover that his local heroes are flawed and fragile human beings and decide never to go on another tour again.

Gender: I used "he" as the pronoun in most of these cases, however all character classes can be women as well. The dimension that this adds to the game is that people in the music scene will be needlessly obsessed with the character not possessing a Y chromosome, sometimes treating her with either blatant misogyny, or well-intended but flawed praise that tokenizes her as a "girl who rocks!" and gets the band on Lilith Fair-like fests that may pigeonhole female musicians more than empower them.

Planning: The game has two difficulty modes: Sellout and DIY or Die. In Sellout mode, you hire a booking agent and a publicist to book your tour and hype you up. In DIY or Die, you do it yourself, taking personal risks in trusting people in other states to come through for you.

Different parts of the country are accommodating to different party compositions. A band with a BoBo and a Virtuoso character might do better in the northeast. Slackers do well in the Northwest, etc. This should be considered when choosing tour routes.

Budget: Your party composition determines the amount in your initial band fund. Before you set out for tour, you spend money on supplies as well as merch which you sell at shows (band T-shirts can also be diverted into the clothing supply).

Money is used to purchase gas, food, repairs for the van, and other necessities, but can also be used to purchase drugs and alcohol, which may help ease tensions that develop between band members but also can have unintended consequences such as nights in jail and people doing things in New Mexico that they will regret for the rest of their lives.

Hitting the Road: Travelling is pretty much identical to Oregon Trail, except that you'll have to sometimes alternate drivers. You press a button to set off and travel on to the next destination or interruption. Ration settings during travel are "dried ramen", "trail mix", and "Clif Bar." There is an option to drive with the windows down if you don't want to spend money to fix whatever is emitting noxious fumes in your van.

Resting: Oregon Trail had forts where your party could rest safely. This game has squats and punk houses which you can choose at your own risk of catching scabies. If you have the BoBo in your party, he sometimes knows a former classmate who is now an investment banker and will let you crash on his $2,000 divan.

Diet: Veganism is treated like a curse in this game, but not because it limits food options--the Taco Bells that line the American interstate system have plenty of vegan options. What veganism does is makes vegan characters feel compelled to spend precious band income in every town at a vegan pizza place that is inevitably unfulfilling. You don't get to choose who's vegan; it is either randomly assigned at the start, brought on by a random "maybe I should go vegan" event in mid-game, or spread by evangelizing vegan members.

Going Broke: If a promoter rips your band off or no one feels compelled to buy your new 7", you may run the risk of going broke. What happens in this situation depends on party composition. If you have a merch guy, the rest of the band will usually pressure him into calling his parents and having them wire some money, along with some shame.

This can also happen with the BoBo, but his parents will be happy that he is out in the world discovering himself. If you have neither class in your party, the slacker will sometimes know a person nearby, from the time he lived in that part of the country two years ago for completely unstated reasons. Alternatively, you can play the busking mini-game.

Next: Beating the game and Replay value.

A single tour in this game has a lot of dynamism in terms of random (mostly unfortunate) turns of fate. The band may persevere or fall apart on any given playthrough. However, unlike 19th century pioneers, small touring bands end up back in the same place that they started and often set out on the same trek again a few months later.

My ideas for additional content include Europe, Japan, and Latin America as tour areas, a New York Hardcore-themed DLC with new characters and a "Pit Beef" and "Street Justice" mini-game, and an expansion geared around touring as a solo noise musician.

Is this a sound pitch? Should I send it off in a sloppily handwritten letter on notebook paper to a major video game publisher like EA or Ubisoft? Or should I become an indie bedroom programmer and make it myself while being funded by Kickstarter money? What would you include in a game about independent musicians travelling across the country?

Taylor Swift Is Destroying America Six Perfect Songs for Getting People to Leave Six Tips for Dating a Musician Remembering STLPunk.com -- How to View the Site Today and Find Your Old Profile Page