Unlike the past couple of editions, this week's "Twitter Litter" is surprisingly free of widespread controversy. In our view, that kind of sucks, since we get our rocks off on musicians being self-righteous and Taking Things Seriously. But just because the animals aren't taking sides on Mileygate or patriotism doesn't mean they've given up on saying stupid things. 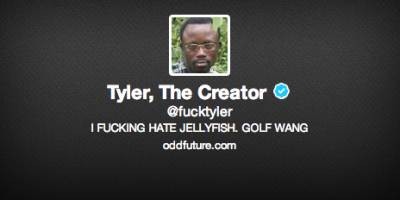 We should devote an entire edition of "Twitter Litter" to Tyler, the Creator (@fucktyler) sometime. Until we get that desperate, though, a single page will have to do. The guy's been busy, in the most inappropriate way that only Tyler can pull off.

YES I FEEL BETTER THAN EVERYONE ELSE CAUSE I HAD GTA BEFORE ALL OF YOU, YOU FUCKING PEASANTS

WAL MART IN NEBRASKA HAS A NIGGA SECTION HAHA http://t.co/fYLgCVg8i6

Dear Eggo, I Love You - Tyler

MAPLE SYRUP IS THE BEST

YO DRIZZY WHOS MAYONNAISE IS THIS IN THE FRIDGE?

Label your shit, Drizzy. Come on.

Tyler isn't the only one playing video games. But instead of "GTA5," Mark Hoppus (@markhoppus) prefers "Animal Crossing":

Hipster, hanging out in a coffee shop. pic.twitter.com/iBYgraSU9p

Last week, Hoppus farted; this week, he's buying java from a bird. Yep, we like him.

Lada Gaga (@ladygaga) has been thinking about her new single and its place in the world:

'Applause' is a very meaningful song to me, because it addresses what many think of 'celebrities' today, that we 'do it' for the attention.

I believe in show business. The 'Applause' is what breeds that thing that I love. When I know i've made you happy. When I know it was good.

But here's the thing, Gaga: "Applause" isn't good. In fact, it's pretty much your worst song since "Alejandro." Yeah, we said it.

You know what is good, unlike that Lady Gaga crap? The collaboration between Elvis Costello (@elviscostello) and The Roots (@theroots). The musicians recently performed songs from their outstanding new album Wise Up Ghost at the Brooklyn Bowl, and Questlove (@questlove) is kind enough to share some footage:

Mmmmm... so like candy. Need more? Check out photos from the show:

Ok, we'll admit it: We're a little jealous of that our Village Voice friends can be so close to that kind of magic.

In case you've ever wondered if Ezra Koenig (@arze) is an eyeroll-inducing douche:

According to RFT Music's hometown hero Murphy Lee (@murphylee), this is how you should wake up in the morning:

Sounds good to us, especially after you launch a new website:

Up like a mug..need a lil gym den buckle down on dis biz..my site up..making changes but go to http://t.co/Q2DKpCce28 n check out the start