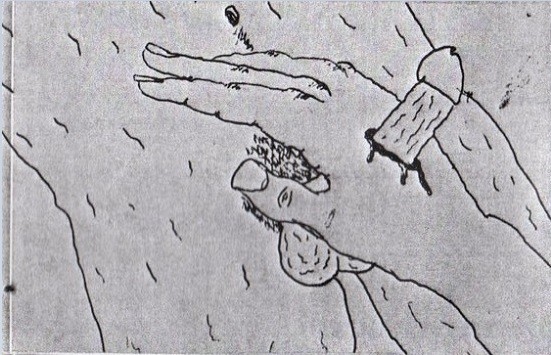 The underbelly of St. Louis scum-life has a new soundtrack. That sound isn't over-produced paper gangsters playing craps in an alley. It isn't GG Allin worship from habitual drunk tank occupants -- for the most part. It comes from some weird, perverted, chemical-partaking punks named Bath House Boys. This band of depraved cavemen has finally gotten out a demo tape and done a little bit of out of town work. Throughout this grueling summer BHB lurched through various basements playing with similar tough-but-noisy hardcore bands like Hoax and Back To Back. The disease is spreading.

The drug-induced phallic attack of the demo's cover art immediately tips off the fact that that this is a Lumpy Records release (of Lumpy & the Dumpers fame). Bassist Zack "Snack Pack" Bernard had this to say regarding the low-profile "signing," for lack of a better term.

"After our split with the legendary Skull Records Radio Records, we thought we'd never make it to the next level. But now that we're under the caring wing of corporate fat cat Lumpy, we're ready to live large!"

This is many of an array of inside joke-laden, inane comments provided by the members of the band when asked what their plans are as a band. No one should expect straight forward "industry talk" from a bunch of basement-dwellers.

Bath House Boys did a short test-run tour with shows that were rumored to have gone well in Columbia and Kansas City. "We did a two day 'Constant State of Missouri Tour' recently in which we didn't leave the state. We're always talking about longer and dumber excursions," says Bernard.

If one is given the opportunity to hang out with the band, one might be confused or entertained at the constant insults being hurled between band members as they decide if a song about dinosaurs or a song about STDs is the next topic to tackle.

On the topic of the band's influences, Bernard says, "I'm pretty sure the only music we have in common is '90s teen movie soundtracks." Given the bickering and glazed but furious mood of everyone in the band, it isn't hard to see why they came up with a sound akin to a coked-up bear singing for DYS.

Plans for a tour in the springtime and a new record are in the works, after singer Gus Theodorow returns from a solo excursion up north. When reached for a comment, Theodorow had only this to say "I'm the big god damn star here." After a confusing/sexual staredown he added, "Fuck y'all."