When legendary local musician, writer and photographer Bob Reuter died suddenly last month, friends and loved ones were grief-stricken. Reuter played in and documented the south city scene for decades, leaving behind a vast amount of artistic work and no shortage of fans and admirers. Last night his bandmates, collaborators and friends came together at the Casa Loma Ballroom to pay tribute to Reuter's life and work.

The list of participating musicians was long and impressive, pulling from both Reuter's deep past and current projects. Between performances of his songs, friends were on hand to read his poetry and discuss his various art projects.

The event also offered items up for auction, with proceeds to benefit the Cowboy Angel Foundation, a fund set up to continue and secure Reuter's legacy and provide funds to disadvantaged musicians.

We documented the entire event in a photo diary. As a tribute to Reuter's work in black and white photography, we did our best to present the photos in a manner as close to his signature style as possible and to capture the scenes that he would have wanted to witness.

It is our sincere hope that these photographs relay the love, energy and talent that was in the room. Reuter couldn't have been given a better tribute than what we witnessed last night.

Some of the art up for auction

In the back room

At door time, the line wrapped around the block and extended far down Cherokee Street

Erin Wiles does a reading

Ellen Herget and Anne Tkach of the Skekses

Mark Stephens (of Accelerando) on vocals

Daniel Lawless of Alley Ghost and Bass Amp and Dan-O

A couple dancing in the crowd

Jack Grelle at the microphone

Hutto and Grabau up front

Matt Bug (of the Ded Bugs) on vocals

Ryan Koenig, Matt Harnish of Bunnygrunt and Nick Zengerling ("Zeng") watch from behind the stage

Nick Zengerling (of Maximum Effort) on the microphone

Matt Harnish (of Bunnygrunt) and crowd

The show from above

Ryan Koenig and Rachel Fenton peek through the stage curtain 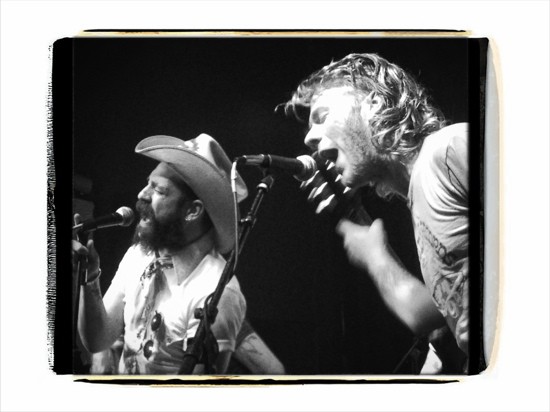