Alabama Shakes' rise to success has certainly been swift and deserved. Just two years ago, the band stood on the stage of the Old Rock House and put on an electrifying set to a half-full room. Anyone in attendance that night walked out of there knowing:

a) The band was poised for big things. b) Singer/guitarist Brittany Howard is a fierce, soulful force capable of commanding any audience, big or small.

The band's Sunday night set at LouFest confirmed both points.

Just as the sun was starting to set, and the muggy St. Louis air was starting to thin, a cool breeze of Southern-fried rock n'roll blew in from Athens, Alabama. What started as a slow-burning soul set, eventually swerved into a full-on rock n'roll swamp boogie. Howard cussed, barked, and preached throughout the set as if she were standing at the alter of rock n'roll--and maybe she was. How many other folks her age could carry a band to the level of success she has in such a short time? And how many other bands this young actually deserve it?

The band's trajectory has been remarkable. It has toured the globe multiple times with acts as big as Jack White, played the Grammys, made an SNL appearance, and now it's landing late slots on huge outdoor festivals. Not too shabby considering the band was still in high school, covering Otis Redding and AC/DC songs four short years ago. And its days as a roots rock cover band shouldn't go unnoticed. Howard and company have the chops to shuffle through almost every page of the songbook of American music and seamlessly mend the pages together into one cohesive chapter. The band bridges the gap between the bluesy swamp rock of Creedence Clearwater Revival with spiritual soul fury of Aretha Franklin--all while maintaining an indie sensibility.

That's not to say the band doesn't have its own limitations, and its LouFest set revealed some of them. While the band sounded great technically, outside of Howard, there wasn't much showmanship. Bassist Zac Cockrell holds down the low end perfectly fine, but at a couple points, you wouldn't even have known he was awake had he not cracked a beaming stoner smile and bobbed his head a bit. Same goes for guitarist Heath Fogg. His subdued, practically frozen pose as he plays almost takes away from appreciating his impressive riffs. And when you throw the band on a vast festival main stage, it just provides more room for them to not move around which is unfortunate. 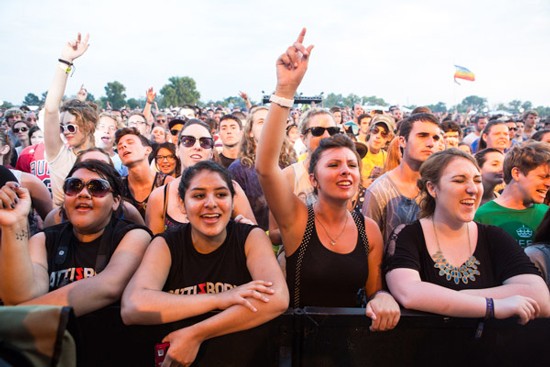 But there's no question that the band knows who's playing ringleader of this show. Brittany Howard's stage presence, and her conviction and urgency, is what sets the band apart. And by the end Sunday night's set, Howard was playing host to a late night spiritual awakening. She kept things as real and intimate as the setting allowed, and there's no doubt that had the attention of everyone within earshot. This was evidenced by the two burly B&D security guards that could be seen dancing roughly ninety yards from the actual stage during a raucous version of "Heavy Chevy." The most well-received song of the night was probably the band's most successful single, "Hold On." Much like the band's overall set, "Hold On" started a bit slower than usual, but by the end, Howard was spitting venom while the rest of the band laid back deep in the pocket.

Set List: Rise to the Sun Hang Loose Hold On Always Alright I Ain't the Same (Unknown) You Ain't Alone Be Mine (Unknown) Heavy Chevy

See also: "I Didn't Get Any Sex" - Things Overheard During the National's Set at LouFest Wilco Creates Thunder at LouFest, Dedicates Song to Bob Reuter: Review, Photos and Setlist