LouFest headliner Wilco is no stranger to St. Louis. With roots across the river in Belleville, Illinois, the group has performed in just about every venue in the region. Hell, to celebrate the inaugural LouFest several years ago, Mayor Francis Slay even proclaimed August 29, 2010, to be "Jeff Tweedy Day," and the prodigal son played a charming early-evening solo set -- half of which we missed because our then-boyfriend dragged us across the field to stake out optimal spots for gawking at stupid Zooey Deschnanel while she performed with M. Ward as She & Him. Not that we're bitter or anything.

Anyway, our point is that Tweedy and St. Louis have a special relationship. And while Tweedy didn't chat a ton during Wilco's headlining set during day one of LouFest last night, he still made it pretty clear with props to his family and the late Bob Reuter that the Gateway City holds a distinguished place in his heart.

Surprisingly, Tweedy didn't wear any of his elaborate bedazzled jackets (exhibit A, exhibit B) for the show. Instead, he matched the melancholy mood that a light rain was bringing and opted for black pants, a black jacket and a T-shirt featuring KSHE (94.7 FM) porcine mascot (In the merch tent, Wilco was selling a shirt with a similar oinker -- about which KSHE and its fans are crying foul). Bathed in blue light and eschewing chatter, the band launched into a stormy "Misunderstood," complete with 24 utterings of "nothin'" at the end.

Masterful guitarist Nels Cline brought some extra country twang to "Forget the Flowers," needling, plucking and picking until Tweedy couldn't help but grin toward the end. And the voices of Tweedy, bassist John Stirratt and multi-instrumentalist Pat Sansone combined in exceptional harmony for "Give Back the Key to My Heart."

With the sky growing darker and a continuous sprinkle of rain threatening to derail the LouFest fun, it was the perfect time to go into a moodier-than-usual "I Am Trying to Break Your Heart." The crowd perked up to an ecstatic level and remained there for the rest of the night, with a group of douchebags violently rushing through the audience to the stage and a hippie girl beside me dancing with her hands above her in prayer like that chick from Prince's "7" video. Wilco worshippers roared as strobe lights complimented Glenn Kotche's percussion and Cline's electronic thunder.

Under the brooding sky, "Art of Almost" from 2011's The Whole Love took on a peculiar dreams-in-space quality that easily could replace Phil Collins' "In the Air Tonight" if someone decided to finance a Risky Business remake. Despite the song being a seven-minute progressive-rock jam, the crowd didn't tire of clapping and twirling. The mood perked up even more when the band played "I Might," with Tweedy and the gang happily bouncing around as hard as the audience was.

Concertgoers were tranquil, and a solitary guy held up a lighter for a gentle "Via Chicago" until Wilco deployed strobe thunder again. Frat boys around me erupted into Arsenio Hall-like woof-woof-woofs. Tweedy must have liked the reaction, as he finally addressed the crowd after the song. "How's it going, St. Louis? Man, it's good to be so close to home."

Having done his duty with a few words, Tweedy began "Handshake Drugs," which prompted one lady to scream and wave around her Kanye-like sunglasses that were fashioned with red, blue and green lights. Wilco followed that up with "Impossible Germany," another long missive that satisfied a nearby dude who had been screaming for the song ALL FREAKING NIGHT. Bewilderingly, a young couple chose this opportunity to nuzzle and slow dance. Yeah, we didn't get it, either. In any case, Cline nailed the shit out of his solo, his necklace bouncing as he whammied like mad.

Continue for tributes to Bob Reuter and the Tweedy family, as well as the setlist. 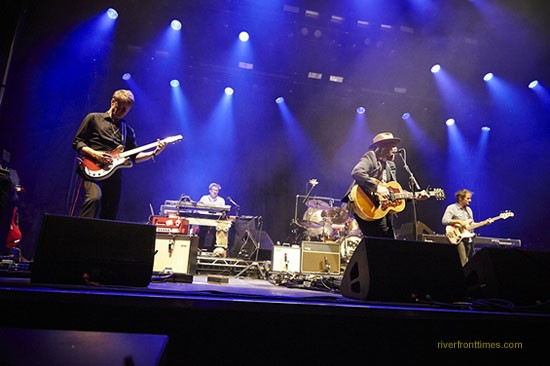 To introduce "Born Alone," Tweedy addressed some holes in the local community. "There's been a lot of loss around here lately. Our community lost Bob Reuter," he said quietly before pausing. "I'd like to dedicate this song to him, and I'd also like to dedicate it to my brother." Tweedy's brother Greg Tweedy passed away September 1.

For "California Stars," the Woody Guthrie cover Wilco had recorded for Mermaid Avenue with Billy Bragg, the band invited members of the National (Read about their LouFest set here!) to the stage. Despite Matt Berninger opting out, the remaining band members bolstered the folk tune, with the trumpet and trombone adding a bit of soft mourning.

See Also: "I Didn't Get Any Sex" - Things Overheard During the National's Set at LouFest

"We've got a little time left. Not enough, but a little," Tweedy said. "This is for everyone who got into Wilco early." The crowd roared as the band started "Box Full of Letters" from Wilco A.M., prompting Tweedy to laugh and say, "That's way too many of you." Tweedy continued his sudden chattiness after the song, cajoling the audience into singing "Happy Birthday" to his father, who was celebrating his 80th year by taking in his son's show.

Wilco wound down the night with crowd favorites and a few nods to their St. Louis roots. "Heavy Metal Drummer" prompted a legion of men to lift their ladies onto their shoulders, to the consternation of those around them. Afterward, Tweedy bowed and said, "This went by way too fast. Thanks again." The horn players from the National then returned for a playful, sing-songy "I'm the Man Who Loves You."

To the crowd's delight, Tweedy threw out stupid encore tradition. "All right, let's just pretend that we walked off and you guys cheered until we came back. We don't have time for that bullshit," Tweedy said. "But we do have time for this bullshit." And thus began "Casino Queen," Wilco's ode to the gambling mecca on the Mississippi.

The 90-minute set ended with an especially jangly "Hoodoo Voodoo," another Guthrie selection from Mermaid Avenue. With an exceptionally enthusiastic, half-naked cow-bell artist dancing suggestively around the stage, it was clear that Tweedy and the gang knew how to bring the thunder to a drizzly night.

Continue to page three for the complete setlist.

See Also: - "I Didn't Get Any Sex" - Things Overheard During the National's Set at LouFest - LouFest: Fun for the Whole Family? A Study - Slideshow LouFest 2013: Wilco Closes Out Day 1