Look, RFT Music knows that the National is a great band. We KNOW it. Their music -- the baritone lullaby of Matt Berninger's voice combined with sweet, eerie minor chords -- is what we like to call "bathtub music," a term that surely sounds weird to you but actually is something awesome, considering that we like to spend four hours at a time contemplating the meaning of life in our water-filled fiberglass cocoon.

Shut up. It's awesome, we swear.

Anyway, that's why we're really, really sorry that we don't have a proper review of the National's spectacular, hour-long set during day one of LouFest. We tried, honest!

The thing is, there were so many people saying downright bizarre things around us that we just couldn't concentrate much on the band's tunes. Instead of watching Berninger pace the stage like a frightened animal or getting lost in bassist Scott Devendorf's powerful low tones, we found ourselves writing down the inane crap that the nearby drunk, high and stupid thought important to discuss.

Below, check out some of the choice nuggets LouFest-goers shared during the National's set. Oh yeah, and we at least got the band's setlist, at the end. That's something, right?

"Got any cheeeeeeeeese?" - a woman doing a Steve Urkel (the annoying nerd on "Family Matters" who constantly barged into a family's house to hit on the oldest daughter and eat curdled milk) impression for her annoyed boyfriend. Repeatedly.

"What were you just doing, sniffing the grass?" "I wasn't, I was stretching!" "Oh. (Disappointed at first, but perks up) Then get it, girl, get it!" - a man and woman sitting in the grass during some super-slow song that we don't remember.

"I'm sorry to get so jealous, but I didn't get any sex last night." - some poor guy with whom we empathize but can't fully understand because we're always and forever getting all the sex, obviously. Sigh.

"I'm normal! I swear!" - a woman protesting too much as she follows a guy through the crowd.

"I can twerk like Miley." - a man who proceeds to do a damn fine job of shaking dat ass.

"THE CARDINALS ARE WINNING!" - a man who, after several inebriated attempts to check the score on his phone, finally brings up the box score at the end of the National's set. The crowd momentarily stops saying dumb things to cheer and slosh beer while clanging bottles.

"I did miss the lobster corn dog, but how about those badgers?" - a man to his friend, who was eating nachos. We have no idea what this means. Does LouFest sell lobster corn dogs? Is eating badgers a cool thing now?

Continue for more ludicrous quotes, the setlist and a few remarks on the show. 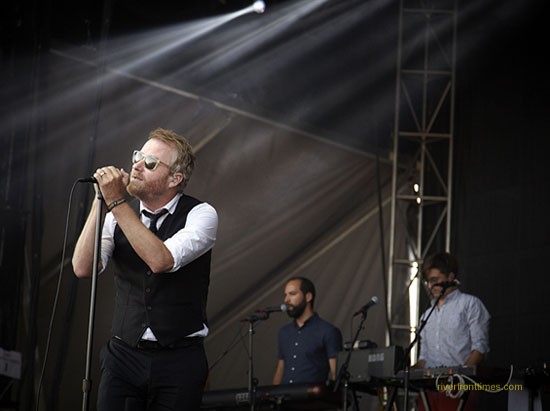 "Do you recognize my hand? YOU DON'T, DO YOU?" - a really, really drunk man waving his hand over the tummy of his friend, who was lying on his back in the grass.

"I've only blacked out twice before this summer, but now I black out all the time." - a proud young woman trading secrets with her BFF.

"This is one of the best songs on the new album! YES!" - a man excited to hear the National play "I Need My Girl" from Trouble Will Find Me, released in May. Yes, we know this isn't exactly a weird thing to include; we just wanted to throw in something pertaining to the show to demonstrate that we tried paying attention a little.

"Your shit is shit." - an angry St. Louis Post-Dispatch delivery boy who finds out we're with the RFT.

* Bryan Devendorf introduced "Conversation 16" by saying, "This is for my friend Roth, who likes zombies."

* At the end of "Graceless," Berninger stopped pacing and hiding, opting instead to push out a primal scream before throwing the mic down.

* Berninger spent most of "Terrible Love" singing among the crowd, first surfing on shoulders and then prowling through the first twenty or so "rows" of people.