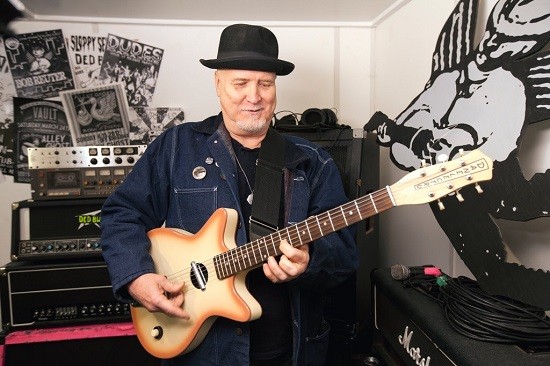 The memorial service for larger-than-life local musician/writer/photographer/DJ Bob Reuter will be held this Sunday at the Casa Loma Ballroom. For those just joining us, Reuter tragically passed away early last month in a freak accident, falling down an elevator shaft. Big Muddy Records, home to Reuter's most recent band, Alley Ghost, is hosting the event, which promises to be a full-fledged celebration of all of the man's many talents with contributions from a plethora of St. Louis musicians and other artistic types.

Big Muddy has also made the recordings from one of Reuter's earlier bands, Kamikaze Cowboy, available for download on Bandcamp. The cost is set at "name your price" and all proceeds go to the Cowboy Angel Foundation, which was founded in Reuter's name to help disadvantaged artists. Download these recordings now so that you will be able to sing along at the show.

The full schedule is below, followed by the guest singers who will be filling Bob's shoes at the event.

8:00 - Johnny Walker (of The Soledad Brothers) and Alley Ghost

9:40 - The Alley Ghost Mythos featuring an essay by Don Beasley and the hand drawn comics by Bob Reuter

Here is the complete press release from Big Muddy Records:

The official memorial to honor the life and work of St. Louis artist and personality Bob Reuter will be on Sunday, September 8th at the Casa Loma Ballroom. The night will feature music from Bob's most recent band, Alley Ghost, in three different forms. There will also be a reunion of Bob's alt-country band from the 90s, Kamikaze Cowboy. This will be a multi-media production and community event that will celebrate Bob's music, photography, writings, and drawings.

There will be a plethora of special guest singers and musicians appearing throughout the night. Singers will including Johnny Walker from the Soledad Brothers, Pokey LaFarge, Mike Leahy of the 7 Shot Screamers, Ryan Koenig of Rum Drum Ramblers and an organically selected grab-bag of St. Louis' most respected and accomplished rock & roll musicians. We will be joined by some musicians of Bob's past and present including a member from Bob's 1980s Syracuse band, Serious Journalism. A complete list of the guest singers and musicians, as well as all information relating to the memorial, is to be published at www.cowboyangel.org/memorial.

In addition to music, there will be short presentations about Bob's other forms of art - his photography, his writing, and even his hand drawn comics. There will also be a DJ spin at the beginning of the night with some of Bob's favorite 45s from his radio show. The records will be selected by a local club and musician DJ Ashley Hohman.

There will be exclusive memorial items and donated art for sale, in addition to band merchandise, which will benefit the Bob Reuter estate and the Cowboy Angel Foundation.

There will be a $10 cover charge which will benefit the Bob Reuter Estate and the Cowboy Angel Foundation, an organization that will serve to preserve Bob's art and help disadvantaged and struggling artists in our community.

Bob Reuter was the quintessential St. Louis artist. He worked in multiple mediums to take the horror and ugliness of reality and turn it into creative pieces of beauty to share with the world. He put his heart and soul into his music, writings, photography, drawings, and his weekly vinyl only radio show ("Bob's Scratchy Records" on KDHX).

On Saturday, August 3rd, 2013, Bob Reuter fell down an elevator shaft and died on impact. He was 61 years old, but he lived with the spirit of youth. He was still writing, still making music, still exerting his total energy into entertaining radio listeners. His death is a tragedy and has affected the entire St. Louis community. This is memorial is a chance for everyone to come together for one last celebration of Bob's life.

For more information on the Memorial: www.cowboyangel.org/memorial

For more information on the Cowboy Angel Foundation and to learn how to donate: www.cowboyangel.org