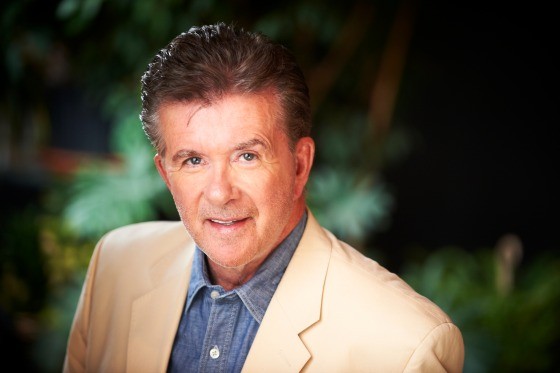 Robin Thicke's "Blurred Lines" is the song of the summer, and it helps continue the Thicke family's run of pop-culture ubiquity. After all, Robin's father Alan played Kirk Cameron's father on Growing Pains, penned the theme songs for The Facts of Life and What's Happening, and will get a star on Canada's Walk of Fame later this year.

Not too shabby! We spoke to Alan about his son's success, his thoughts on the very-NSFW "Blurred Lines" video (below) and other stuff!

What is your earliest musical memory with Robin?

Actually, he started with some dance moves. He was a big fan of Michael Jackson and songs like "Smooth Criminal." His first effort was to work out a little video with a friend of his, Brian Austin Green. He and Brian did a video to "Smooth Criminal," as back then he was interested in busting some moves. From there, he's a very good mimic; he does a good verbal impression of me, and he was also mimicking musicians. He could do Stevie Wonder, Prince and Billy Idol, so he starting doing what his favorites do as he evolved his own sound and approach to music. Way back in those early days when he was fifteen or sixteen, I used to write a few songs with him to show him form and structure a little bit, but by the time he was seventeen, he was already better than me so I had to just share him with the world at that point.

Were those early songs hip-hop based, like Brian Austin Green's?

Yeah, probably more hip-hop. He was always interested in R&B and rock and had his own vision of a song that fused all of those and wound up a pop sensation, so he did the right thing.

When did it become clear he'd pursue a musical career?

One of the big discussions was when he broke the news to me that he wasn't going to college. We had always assumed the kids were going to take that step, but he pointed out, rightfully, that he was in a business that's driven by age, and agism kicks in in your early twenties if you haven't already done something, so he had to find some momentum with the opportunities he had, and I had to agree with him. He ultimately made all the right moves.

Do you remember the first song where you thought he might really have something?

No, because he's always been productive and he would probably have a dozen songs going at the same time in various stages of development. You would hear bits and pieces of what would amount to a whole album that he kept to himself, so he already had a body of work. He could show you a ballad, a rhythm tune, a dance track, he worked until he had a whole scope to demonstrate.

What did you think of "Blurred Lines" and its video?

I liked it right away. It's an earworm, that bass and those vocal licks stick with you right off the bat. I was as impressed with the track as I was with the video. It's good that there's so many mash-ups of it. I don't know if it was by design, but it's good that they did something that was so visually simple enough and straightforward enough that it could be reproduced and copied by those choosing to parody it. Consequently there are dozens of them out there, everything from "Growing Pains" to Bill Clinton to the transexual version to the Houston Rockets cheerleaders.

You have a long history of making music as well. Are there any plans this holiday season for Robin to cover your 2008 Christmas song "Bailout Santa"?

I apologize for that one. I have a few that I need to apologize for over my checkered career. No plans to do an entire Bailout Santa Christmas album. I did that as a joke, a favor to some friends in Seattle who were very ambitious to put something online.

Do you have any plans for future music yourself?

You know, I don't. I still write a bit of music on demand, but I don't spend my spare time cranking stuff out on spec. I have a song on Robin's album called "Ain't No Hat 4 That," so I'm proud he included me, and I did a musical called Queen For a Day that's on its way to Broadway, and they were nice enough to invite me to write a few new songs for that. If anybody's interested, I'm happy to do what I can.

You've also made a lot of iconic television show themes over the years, such as The Facts of Life and What's Happening.

Yeah! A lot of that stuff is available on technology that wasn't around back then, like ringtones. So college kids get into bets about who can remember the most vintage theme song lyrics and before you know it, I'm getting $1.75 from a ringtone purchase. It's crazy where that stuff pops up nowadays.

For which TV show would "Blurred Lines" be an ideal theme song?

Gee, I don't know. It might have worked on Modern Family which seeks to re-establish the family genre and new forms of nuclear families. So Modern Family could have been called Blurred Lines. I have a new show called The Thicke of Things, and we're trying to blur the lines between reality and sitcom. We're starting with our real-life characters and adding sitcom elements, as if you saw a real family popped into a sitcom. We're having fun with that, we're doing fourteen episodes, and we'll see how people like it. We're putting our ass out there and trying something different in the same way Larry David has mixed real life with his plot lines. He's raised the bar and given us all something to aspire to.