This Incredible Make-A-Wish Teenager Went to the Gathering of the Juggalos, Got a Lap Dance (NSFW)

We first heard about seventeen-year old Cody Morin on our way in to Cave-In-Rock, Illinois, site of the fourteenth-annual Gathering of the Juggalos. After hours spent driving through Southern Illinois we stopped at a restaurant/visitor's lodge in the park to ask for directions, where we learned that there was a kid from the Make-A-Wish foundation staying at a cabin that was rented out to visitors. After a quick phone call to the family, we went to the cabin and met with the young man, who has a congenital defect in his liver that prevents it from producing one of the enzymes required to do its job properly. His one wish was to meet the members of ICP, his favorite band, and he has traveled over 26 hours from Vermont to make his dream a reality.

Cody's a pretty quiet kid, but like any teenage boy and self-respecting juggalo, he's also psyched to see some titties.

See also: - Our Complete Gathering of the Juggalos Coverage

With Cody was his mom, Darla Fletcher, a blond woman in her forties who is scheduled to go under the knife alongside Cody in about eight weeks. "No alcohol for me," she laughed. She will be donating a piece of her liver to her son, who is not eligible for a liver from a deceased donor. "They say he's not sick enough," she says, rolling her eyes. This despite the fact that he has had over ten surgeries in the last year.

"They cut him open and sent him home with a tube sticking out of his stomach," she goes on to say. "And now I have to give him all of these shots. I'm not a doctor, but I had to figure this stuff out." 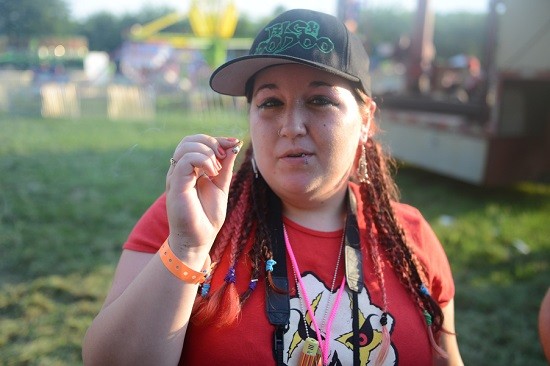 With the two of them were Cody's sister, Mimi Morin, and his best friend Alias Foster. "He's my brother," Cody explains. "We are really close." Alias is a fresh-faced seventeen year-old landscaper by trade, with an interest in underwater welding. "The mortality rate is really high with that profession though," he says. Alias rolls a blunt and explains to us that this is the first time any of them have ever been to a concert.

"We're Gathering virgins. Hell, we're concert virgins. We've never been to a concert before." Darla then chimes in with a laugh, "Well, I have."

The family is back to the cabin after spending a few hours at the festival so that Cody, who started feeling sick, can rest. Mimi is impatient but understanding -- Anybody Killa is scheduled to play in about 45 minutes, and she want to make sure to get back in time. Cody is quiet; you can see in his face that he is concentrating on feeling well. 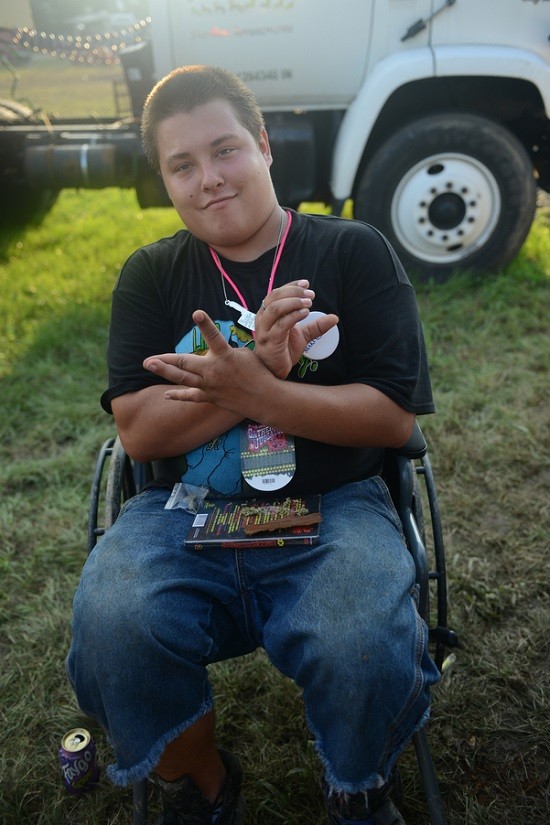 On the subject of Cody's illness, Alias speaks with the kind of unintentional callousness that only a teenager is capable of. "It's kind of a blessing in disguise," he says, "because otherwise we wouldn't have gotten to do this."

"I'm glad you're having fun," Cody shoots back with a look.

The family has been granted by staff a spot on the grounds right by the main stage, where vehicles normally are not allowed to park. This is to make it possible for Cody to sit and be comfortable while watching the artists perform. They meet with ICP on day four of the festival, immediately following the group's 2 p.m. seminar at the seminar tent. We caught up with them after the meeting took place and asked how it went.

"It was awesome," Cody says, his eyes lighting up. "Violent Jay was so cool. He got us all lunch. He said 'I'm fat. Is anybody else hungry? Let's get some food up in here!' and sent a guy on a golf cart away to fetch a feast of burgers, Philly steaks and ribs for everyone to eat." 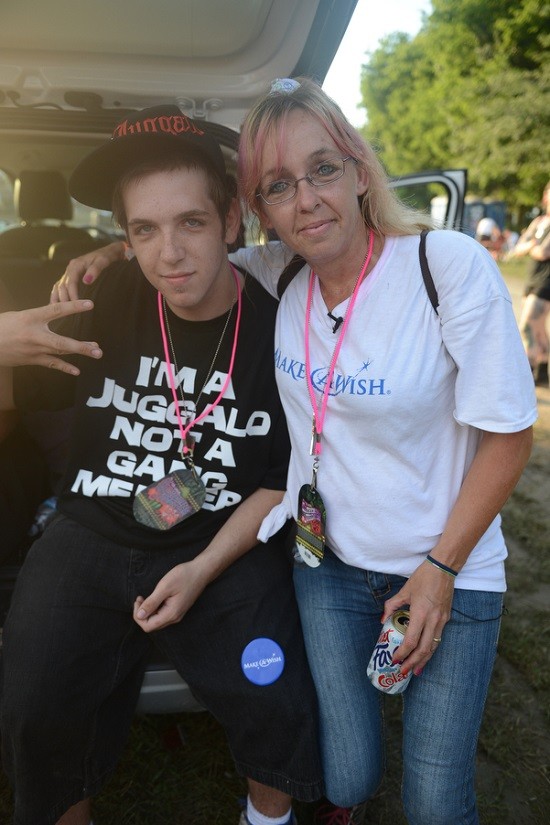 "He was so nice, very open," Darla elaborates. She then leans in, speaking quietly. "Like, now I know that Violent Jay is constipated. He told us that."

While we are speaking, Jason Webber, Psychopathic Records' PR chief, pulls up in a golf cart. "Is everything okay here?" he asks, checking on the family. Constantly in motion, Webber has been seen running around like a chicken with his head cut off time and again at this festival, constantly juggling duties and always having two conversations at once (one in real life, one through the ever-chirping walkie-talkie affixed to his shirt).

"Everything is fine!" he is told.

We asked Cody if his experience here was everything he had hoped it would be.

Story continues on the next page. NSFW.

"Honestly, the highlight so far has been those titties," he says with a wry smile, referring to a nearby girl who had heard he was sick and came and danced for him unexpectedly (and unsolicited) before walking away just as mysteriously as she walked up. Nearby, Alias nods his head in agreement.