Juggalo Eats and the Quest for the Mystical Burrito Man 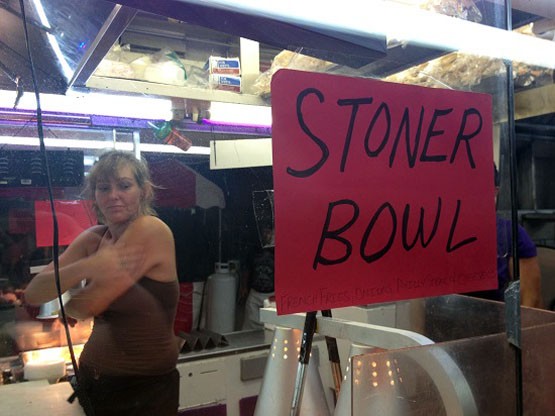 One of the true hardships that we face as a nation is the omnipresent problem of being surrounded by booze and stimulating foods. In the comforts of your own home, you may be able to curb your pizza roll addiction into having just a civilized cup of tomato soup. At the Gathering of the Juggalos, you face a different world. Out here, it's harder than ever to think of your overall health as it becomes more about shoving as much crap into your body before a spray-painted golf cart driven by a man wearing nothing but overalls crashes into you.

If you're truly wise, the short-term questions like, "will this product make whiskey and bile shoot out of my nose" will still dart in and out of your conscious, non-reptilian brain.

I'm a gluttonous freak when it comes to food. I am the direct descendent of a man who once ate five pounds of lasagna over the course of five hours. So of course, I did what any decent journalist at a festival for drug-crazed and murderous clowns would do and gorged myself full of fried fat and processed sugar while studying the weird food of others.

I started with the pizza, which was not very good and was served in a disappointing, meager portion. The crust was bland but the sauce had a satisfying acidic taste. I did not get a picture of the slice that I threw up. However, the pizza sitting in the urinal should convey the right feeling I'm looking for. Curiously, the box for the pizza was right outside of the toilet, meaning someone opened the box up, took the pizza out, and smashed it into this urinal.

Better food was better found elsewhere the next morning. We found ribs, fried chicken on a stick, and pork chops. We saw pancakes cooked with Faygo. Daniel mowed down a turkey leg the way we all do--with enthusiasm before remembering those creepy stringy bones in the middle. I stood looking on, dipping my fried chicken in a mixture of tater tots and gravy that I had engineered like a fat idiot.

Later, we tried to strike up a political debate with the counter person at an Anarchist Pretzel/Snow Cone spot before everyone involved decided they were bored.

We capped off another evening of slamming warm beers and eating weak Jell-O shots with two helpings of Stoner Bowls.

Served in a foam bowl, the stoner bowl is a bunch of French fries, peppers, onions, Philly steak meat, and cheese on top. Hardly brilliant, it was probably the tastiest thing we ate from the stands.

The "walking taco" came in second, which is just a bag of Fritos filled a bunch of warm who-gives-a-shit.

See also: The Gathering of the Juggalos' Best Overheard Quotations

Off the main drag, Juggalos also cooked up burgers and hot dogs on tiny grills, staring at us with apathy when asked if we could take a picture of their home-cooked cuisine. "they're just burgers, dawg," remarked a sunburnt kid wearing a matchy-matchy black and red t-shirt with black and red shorts. Another attendee cooked hot dogs, pork chops, and creamed corn in his tent.

On the third day of Juggalo Christmas, we heard the legend of The Burrito Guy, a creature hidden somewhere on the campgrounds who made the finest burritos known to man. Powered by an intense stomach boner, I began asking person after person the next morning and afternoon where I could find The Burrito Man.

"I've been coming here for twelve years and I've never heard of that guy."

Our search for the burrito man continues on the next page.

"I've heard of him. I've never seen him though. I think he's, like, a unicorn or some shit." "I dunno, but they got burritos over at the turkey-leg stand."

I grew frustrated and spiritually congested. On top of that, we kept being teased by a young man juggling two giant smokers--each time we passed, he had just sold out or had another round almost ready. Eventually, we managed to catch the kid with the grills while there was a crowd of six people jealousy eying a group of security guards wearing neon green shirts. The guards had somehow ordered from the grill-master ahead of time and were picking up their goods just in time. We spoke to the chef himself behind the only haze of smoke that wasn't drug-related and learned he's a Juggalo that goes by Skinny Vinny, based out of New York. We listened intently as he rattled off the list of people at the festival going straight to him for food, including Violent J himself.

But no story of celebrity encounter and an underdog grill champion from a small town in New York could derail my determination. It was necessary to find and consume these burritos. We met up with our trusted photographer, Nate "Igor" Smith, with the sole purpose of probing him for information. Quick on his feet, he immediately began leading us through alleyways of tents and campers. We stopped again to ask for help and got pointed into one direction. We peered into another tent and were sent the opposite direction.

Discouraged, we started talking about giving up. It was obviously a wild goose chase concocted to torture Gathering poseurs. Out of sheer desperation, we approached a dim tent in the distance with a guy on a megaphone trying to sell us drugs or beer. We approached them and asked for help.

"Y'all are looking for the burrito guy, huh?" one of them asked, talking softly with the megaphone now silenced. "I can give you directions."

"Take us to him, and I'll buy you a burrito," I stammered without hesitation.

The kid kept to his word and minutes later we found ourselves in front of shielded old fireman's truck from 1978, converted into a food-truck operation with an older dude sporting long hair and a braided beard manning the grill. His name is Bill Huntsmen and he bravely plunged his hands from the warm girll into icy temperatures to sell us cans of root beer Faygo for only $1. He was humble, wise, and kind. He ran the operation with a real cool cat named Bruce Wayne Hall on behalf of the owner, Jesus Ayala. We watched as he separated slices of American cheese and gingerly placed them on tortillas freshly set on the flat-top.

This is the first year out of the past several that Ayala himself was unable to attend. Because he is getting on in years he stayed home this time, and the Alton, Illinois resident reportedly will soon move back down to Mexico. "He wants to go home and be with his family," Huntsmen explained.

The secret burrito recipe is Ayala's, who passed it on to Huntsmen and Hall. You can order them with varying degrees of heat, along a scale from one to ten. "I personally can't do more than a three," Huntsmen told us. "Jesus will try to get me to eat his habenero ones. He says, 'They're not too hot.' I tell him, 'Yeah, not for you!'"

"Why do you think Mexicans live so long?" he continues. "They eat that hot stuff, and it kills all the bacteria in the body. Just flushes it right out."

Entranced, we watched as our burritos were prepared. Priced at a reasonable $5 each, they had meat and some sort of potato mixture, along with Ayala's secret spice recipe. And they were incredible -- superior by miles to all of the carny food that had dominated the rest of the week. That night, Daniel and I slept with an unprecedented feeling of content in our rented Toyota poser van. The next day we went back for more, naturally. Again we found Huntsmen and Hall sitting in chairs in their hidden hiding spot. We asked about the secrecy. "Yeah, we park somewhere different every year. They want you to buy a vendor's license, and those are expensive," Huntsmen told us.

When we finally moved along, we left with a sense of reverence. Huntsmen corrected us when we said "thank you sir" as we each eagerly grabbed our culinary prizes. "It's fam here," he says. "No need for the formality." Huntsmen then grabbed some more tortillas and threw them on the grill--another group of starry-eyed adventurers had found the beast of legend, the mythical Burrito Man.

"What can I get you guys?" he asked them as we walked away. "Burritos" was the response. The best damn secret Juggalo burritos you will ever eat.