The Gathering of the Juggalos' Best Overheard Quotations 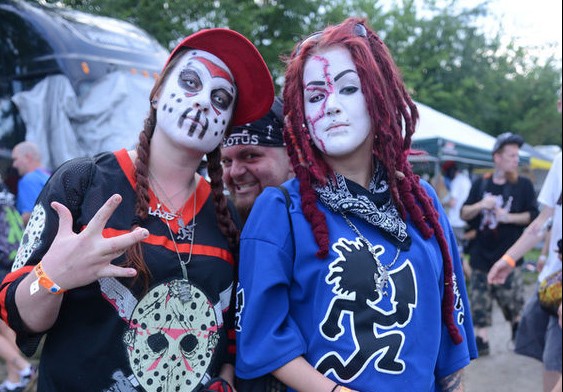 During the Gathering of the Juggalos, Cave-In Rock, Illinois becomes a sonic disaster zone. Even if you're a rap lover, it's hard to keep your mind sharp with all of the noise. But within the cacophony of sounds, a few incredible Juggalo statements were somehow deciphered and recorded by our numbed ears. The things these people said may not make a ton of sense, but when you are surrounded by a constant thundering bass drum, the maniacal shouting of "whoop, whoop," and the occasional dynamite explosion in the distance...you probably wouldn't make a whole lot of sense, either.

- One way to be sure that you're at the Gathering is that the Black Album by Metallica is always playing. And no one seems disappointed. 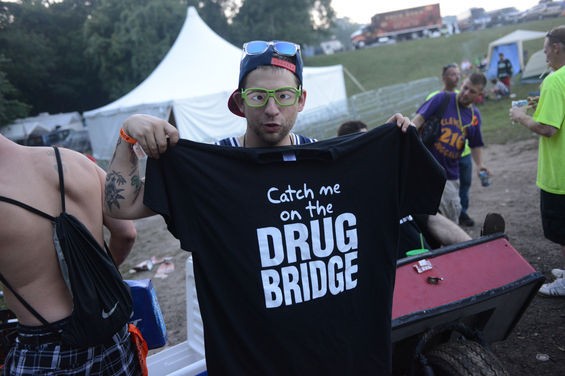 "Its synthetic acid. It's from Canada. I won't sell you more than two hits."

- Three sketchy kids wearing gym shorts were sitting outside of a tent with a sign that read, "$10 TRIP YOUR FACE OFF" and said this to us. They claimed to be selling a hallucinogen called 2CB. After hearing reports the next day of multiple overdoses on a drug called 25i (also called N-Bomb, a derivative of 2CB), this encampment mysteriously disappeared. They also offered us a money back guarantee.

See also: Death at the Gathering of the Juggalos: "Four Dudes That Had Been Sleeping With a Corpse."

- Shouted by a kid with a wiry frame with homemade tattoos. He yelled at a dude asleep on the ground a few minutes later and was surprisingly effective at getting him up.

"Girl, I would break your neden."

- Said by a kid so young it is difficult to believe he is aware he has a penis. If you're anything like me, you had no idea what "neden" was but picked up on it using context clues pretty quickly.

- Only a small piece of garbled nonsense to come from a Juggalo swaying back and forth near a Port-a-John.

"You don't know what a cheeseburger is? Oh my god, they're the best."

- Some girl said this to someone else in a tent we were passing by, I swear to god.

"Im illin' and chillin' with my guts all over the ceiling."

"We're scrubs so we always get the bone."

"I don't know, I think Whitney Houston should have died."

"I don't know if you know or care, but do not take the acid."

"Do not take anything called 'spice' -- that's bath salts."

- From an unnamed associate

"You can take mushrooms and eat acid just as long as you don't have any glass bottles."

- Security at the front gate

Quotations from the Gathering continue on the next page.

"Someone died and now she's getting the fuck out of here."

"I accept Jesus into my heart."

See also: Gathering of the Juggalos: Misconceptions and First Impressions

"Theres only nine hot girls in this whole thing."

"You smell that shit? You almost throw up. That coke -- its almost like molly."

- Two quotes from a group of guys we tried to trade a tallboy of Budweiser to after a short-lived attempt to see what we could barter up to from a beer. We quickly found out that no one had anything worth trading.

- Yelled from a tent to a photographer

"This is a synthetic drug. It should act like a normal drug -- then people started reacting poorly."

"I landed on my belly and just started slidin'. Then the four wheeler hit me in the back."

"Have you seen how they clean these things? They just open a door and blast a hose."

- Random Juggalette, on the condition of the bathrooms

"Fuck him in the ass with a Sharpie for fifteen dollars!"

- Spoken through a megaphone like a carnival barker in an attempt to get some poor kid enough money to get back to Maine. Minutes earlier, he was taking a kick to the testicles for five dollars.

See also: The Gathering of the Juggalos Brings Out Foam and Fireworks on Day 4 (NSFW)

"I got some serious shit -- hand sanitizer will save your life. You'll get Gathering-itus."

- One shirtless Juggalo to another

"Hey are you really trippin'? [Waves hands in kid's face]

"I'm gonna rape your mother if you don't buy our drugs"

- Yelled over a megaphone by a kid with a heavy amount of facial tattoos who had been stapling dollar bills to himself and later cut off at least one of his nipples for $80. (It is actually this guy! --ed.)

"Smoking a blunt on the ferris wheel is the shit!"

- Exclaimed by the happiest person ever seen on the planet

"Does anybody wanna buy this megaphone for fifty dollars?"

- Shouted through a megaphone

"Why do I do anything? Fuck life."

- Me, after days at an ICP festival