One of the many rumors one may hear in advance of attending the Gathering of the Juggalos is that the bathroom-related accommodations leave something to be desired. Showers, for example, take place in trailers and may or may not have running water--that one I cannot speak to, as truth be told, I haven't even tried to take a shower here. Not even once. Not for a second.

One lavatory adventure from which one could not simply abstain is actually using the restroom. Despite all of the mental willpower I tried to pour into the situation, I kept finding myself repeatedly back at the carnival food, and by extension, with an urgent need to relieve myself shortly thereafter.

Enter Maier's Tidy Bowl, whose slogan is "The best answer to nature's call." The port-a-potty company is misnamed, in my opinion--a more proper adjective than "tidy" would be "nightmarish." Or "inescapable." Maybe "Maier's Overflowing, Unavoidable Shit-splosion Bowl." That "bowl" is throwing me off now too, honestly, as now this is starting to just sound like the worst football game of all time. But we'll grant Mr. Maier the use of that one. 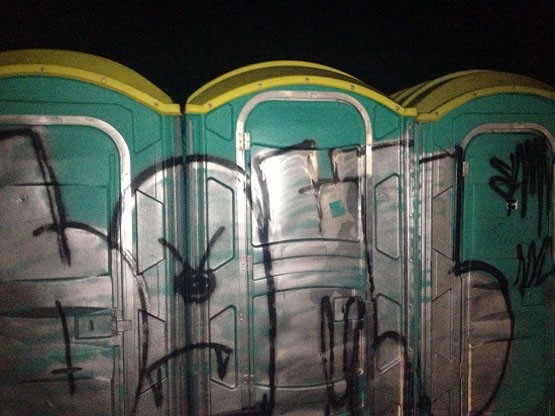 Having intractable, carny food-based diarrhea in a 200-degree box of poop is bad enough, but add to it the destructive whims of thousands of Juggalos (not to mention their similarly poor cuisine choices) and you wind up trapped in a hell-ish world. The sweat that is pouring off of your body, the liquid covering every surface within the john, the two inches of either dook or mud that is caked on the floor (let's be real: It is probably a mixture of both, as is every puddle of brown on the grounds at this point in time) all combine to make you feel like one great big piece of shit just sort of oozing into the abyss below. It is enough to make a man question his decisions in life.

A pro tip: Stand near the johns and wait for a nice-looking girl to enter and/or exit. Not a super-attractive one, mind you, as when you are an attractive person the world is your port-a-john anyway. The super-attractive people are in there pooping all over the seat and floor; this will not be helpful for you. No, we mean a sane, reasonable-looking girl that seems as though she would be okay to have a conversation with. When she exits the facilities, swoop in there quickly and you will find that accommodations have improved dramatically.

Warning, these pictures are graphic in nature, and what has been seen cannot be unseen. Some of you out there may remark "Port-a-potties are always gross; those aren't so bad," but we'd humbly have to disagree. Please bear in mind that you cannot smell a photo. (Also worth noting is that people give you weird looks when you wander around throwing open port-a-potties and photographing their contents.)