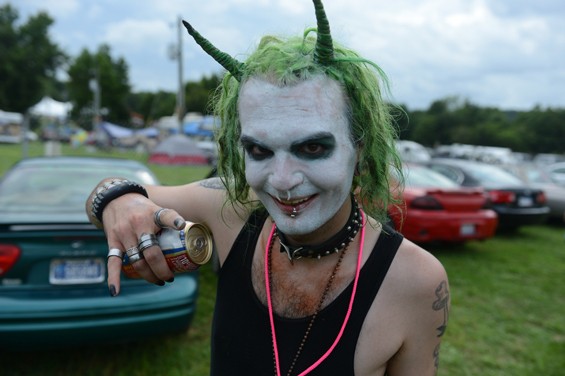 At some point in your life, you may find yourself sitting in a minivan in rural Illinois, stressed out as you wear a metal butcher-knife pendant around your neck. Your ankles are covered in mysterious goo and all of your beer is warm. It could only mean one thing -- you're at the Gathering of the Juggalos, and you're a moron. Not because you decided to go in the first place, but because you didn't put any thought in it until an hour before you had to leave. Because RFT is a respected publication devoted to helping mankind, here is a list of the ten things you should bring to the Gathering of the Juggalos (and, by extension, some things you shouldn't bring).

To Bring: 10. Stupid Transportation If you're at the Gathering, chances are your body has been malformed from years of consuming alcohol and fast food. You need a way to get around the huge site other than the boots you salvaged from the thrift store that you thought were a good deal even though there was a hole in the sole. While the Gathering of the Juggalos website states that motorized vehicles are forbidden, no one actually seems to care. Even if you hit a pedestrian. There seem to be golf carts to rent (somewhere), but you may be better off being a shirtless asshole zipping around on a moped or gas-powered dirt bike.

9. Garbage Snacks The food at the Gathering is priced about how you'd expect at any festival event. You can buy a barely edible cheesesteak from one of the brightly lit trailers staffed by carny families for $8, or you can do the smart thing and pack your own. Your health obviously isn't a concern if you're here, so do the right thing and do your grocery shopping like a seven-year-old with a license to buy beer. Dump a can of tuna fish into a bag of Doritos and weep quietly when you find yourself licking the empty bag later.

8. Cigarettes and Over-the-Counter Drugs Wandering around with heartburn from eating two pounds of fried chicken on a stick is no fun. Unfortunately, the simple things we take for granted in our medicine cabinets are nowhere to be found at the fest. While there is a vibrant outdoor economy a la "Bartertown" in Mad Max 2, the only place where you can get smokes or something to ease your aching body seems to be found at a small tent stocked with overpriced goods. A pack of cigarettes will set you back $11, and a small thing of baby powder to clear up the confusing, sweaty mess that has become your genitals costs $5.

7. A Watchful Eye The chubby Pacific Islander with the septum piercing won't stop staring at you. You knocked over the cooler of the sweaty guy whose face looks like a smashed blobfish. Someone in a dark tent is asking you a question about "The Lotus," and you didn't reply with "whoop whoop" right away. The only people working security seem like they were picked up hitchhiking near a prison and given a neon green shirt. Point is, watch your back.

6. Rain Poncho Have you ever been outside? There is this shit called "rain" that falls out of the sky sometimes. It makes your clothes feel bad for hours and causes your smartphone to malfunction. Guess how many rain ponchos they sell at the festival? Zero. While there's a lot of hustling going on, there was no "Nachos on Ponchos" tent -- an idea I brainstormed earlier about charging people to eat nachos off of your body as you wear nothing but a poncho.

5. Boobs There are so many exposed breasts at this thing. In the words of some dingus on a stage during a contest where women dance while being sprayed with soda, "Fuck Mardi Gras, they give you beads. We give you $250 in merch!" So, ladies, if you've ever needed a T-shirt that says, "I'm a Juggalo Not a Gang Member" and haven't been able to dig up that $12, your sweater meats will make up where your wallet is lacking.

3. Cash No one accepts cards. Not a single place. Don't even bother. The ATM fees are $5 each transaction as well, so take out a lot of money. Put half in your wallet and half in your sock.

2. Flashlight The Gathering is extremely dark everywhere aside from the stage and food areas. To avoid stepping in human feces or on faces, you need some sort of light. Headlamps, glowsticks -- anything. While it'll save you from awkward encounters like stumbling over a tent stake, having a flashlight will also allow you to perform the Scavenger Maneuver: being one of the many people scanning the terrain for unused nitrous oxide canisters and money near the stage after everyone has left the area.

1. Somewhere to Sleep That Isn't a Rented Minivan Last night I slept on a bunch of empty cans and a bag of beef jerky. I used a 24-ounce can of Budweiser placed under a pillow for proper neck support. I woke up covered in plastic bags, and one of my boots was lying underneath our vehicle.

Find somewhere to sleep that isn't a rented minivan.