Gathering of the Juggalos: Misconceptions and First Impressions 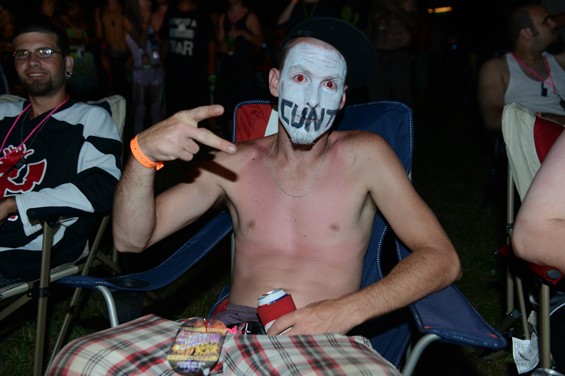 By its organizers' own assessment, the Gathering of the Juggalos is an event filled with the most misunderstood people of all time. Juggalos are generally looked down upon by "normal" members of society, thought of as losers, degenerates or outright criminals -- even, most recently, as a full-fledged gang by the FBI. In keeping with these prejudices, the Gathering itself is subject to wild speculation by people who have never attended, in regards to its debauchery and unhinged behavior.

Some of these preconceived notions are warranted, and some are not. Here are a few of our first impressions of the Gathering, now that we have spent a full day on the grounds.

We probably are not going to be murdered by Juggalos here.

See also: 10 Must-Have Items When Camping with Thousands of Juggalos

When I initially volunteered for this assignment, many of my friends and family members assumed that this would be the last they would ever see or hear from me. I would be quickly outed as an interloper, it was assumed, and would shortly thereafter be subjected to the glee-filled pool-ball-in-a-sock wrath of the Juggalo Family. The band's "psychopathic clown" motif and violent imagery seem to lend credence to this notion, but in reality nearly every person that we have come in contact with has been very nice.

One thing to consider is that this is the one event of the year at which these misunderstood societal misfits can gather in large groups without fear of ridicule or judgment from outsiders. Truly, the inmates are running the asylum. In keeping, attendees wander around with joy in their crazy clown hearts and smiles on their painted faces. The calls of "Family!" and "Woop woop!" are each shouted in order to express solidarity between kindred spirits, about every ten steps or so.

See also: The 2013 Gathering of the Juggalos Opens Up (NSFW)

One caveat: Information for the press included a list of tips -- things like "bring mosquito netting" and "wear sunscreen." Also on this list was an explanation concerning the "woop woop" and "family" call-outs. It was strongly recommended that when someone says these things to you, you should most definitely respond in kind. The repercussions of not doing so were not made clear, but suffice to say, I have loudly been parroting back clown-love to all who have expressed it in my direction. I suppose that could possibly help explain my continued survival.

Everyone everywhere is selling something. Most of it is drugs, of course -- this is a music festival, after all. But more on that aspect in a minute. More interesting are the out-of-the-box oddball ways people have been making money. Take, for example, the man with the "Bet you can't hit me with a quarter" sign. His pants were barely able to stay up, due to the weight of the jangling coins in his pockets. He even paid his way into the festival with change.

Elsewhere, a man with an unreal amount of facial tattoos had dollar bills stapled all over his body pitched his talent like a carnival barker. "Step right up, one dollar! This is a real staple gun; this ain't that fucking kiddie shit like you used to do when you were a kid. This shit really hurts." I probably saw twenty blood-smeared dollars hanging off his skin.

Then there was the topless girl offering "boob squeezes" for only $3. Yes, there were takers.

Continue on for more on the 1) drugs 2) boobs and 3) potential for violence at the Gathering of the Juggalos. Jesus Christ, there are drugs everywhere.

This is not a revelation, I know. Tales of the "drug bridge" at the Gathering are well known. Actually walking across the thing is a whole different story, though. Every single drug that I have ever heard of is represented, in large quantities. Salesmen peddle their wares loudly to all who walk by -- at 5 a.m. we were offered "cocaine for breakfast" by a heavy-set fella still stationed at his post. Many dealers not on the bridge wander around with megaphones, loudly advertising whatever mind-altering substance it is that they have to offer. And one of the very first things we witnessed upon arrival was an abundance of individuals wandering the grounds double-fisting balloons of nitrous oxide. Still, I have seen surprisingly few people passed out face-down in the mud. I guess Juggalos have a knack for handling their chemicals. (Although we were told by a police officer that there had been ten overdoses on acid in the first day -- apparently some bad stuff is going around.)

Jesus Christ, there are boobs everywhere.

Interestingly, Juggalettes seem to be eager/willing/happy to show off their breasts, often by request and with no promise of compensation. Many simply wander around without shirts on at all. At this point I am torn between whether the situation is exploitative or empowering. On the one hand, the men on the grounds seem to have the same mentality as those who attend Mardi Gras celebrations, and they are often boorish in their approach. On the other, it is hot outside, and I have definitely taken my own shirt off, so why shouldn't the ladies do the same?

Either way, there are boobs everywhere. What's funny about it is that in the dark it becomes difficult to tell if you are seeing the breasts of a shapely female or those of a big fat guy. Both are well-represented.

Well, OK, maaaybe we will be murdered by Juggalos.

This seems to be a place without laws. Huge groups of people are high on every chemical substance known to man. Festivities last until five in the morning, every night. Golf carts are driven with reckless abandon at high speeds on pedestrian trails by intoxicated individuals -- some of whom are even famous. (We spotted Violent J in his ride, making his way across the drug bridge, sans facepaint. Spoiler alert: He's fat.)

See also: The 2013 Gathering of the Juggalos Opens Up (NSFW)

The point is, danger lurks around every corner. Though I truly believe that these people don't explicitly mean harm to anyone (even press dorks like us), this does all amount to a recipe for potential disaster. There is very nearly a complete lack of supervision, coupled with reckless intoxication and a pervasive "fuck everything" attitude (no seriously, I read that on a shirt this guy was wearing).

How long can this possibly continue to go right?