Death Reported at Gathering of the Juggalos; Drug Bridge Closed

The Gathering of the Juggalos' infamous "drug bridge" is closed, following reports of a fatal overdose. Ambulances were on the scene around 2 p.m. Friday, according to witnesses. The substance involved is believed to be heroin.

Since the incident, the open air free-for-all market known as the "drug bridge" has been closed for business, with two semi-trucks parked to block its access. There have been numerous reports of overdoses throughout the first few days -- according to a police officer we spoke to, there were ten just yesterday, but none fatal.

Jason Webber, director of public relations for Psychopathic Records, which puts on the Gathering, tells us he heard rumors of the death, but they were not official and he could not verify them. "I can't talk about that on the record," Webber says. 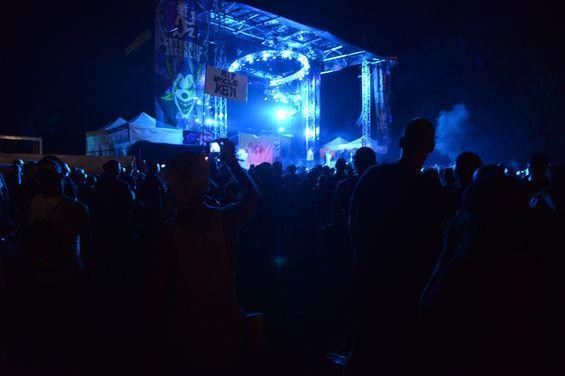 Security searches for contraband were performed on all cars passing onto the grounds upon arrival. Mike Wilson, a security guard on staff tasked with preventing people from walking onto the drug bridge, told us he had heard reports that someone had died, but did not have details. "We stopped a few people from bringing things in," he said, "One guy had a lot of drugs. He was a drug dealer or something and had no business being here." In regards to the open drug use on the grounds, Wilson concedes "I have had to look the other way a few times, but mostly these kids are just having fun. No one is violent or even rude."

"These are all real good kids out here," Wilson continues. "It's a shame."

We will update this post with more information as it comes.

Drew Ailes contributed to the reporting of this story.