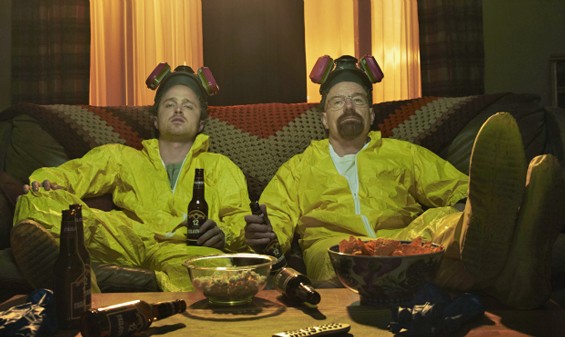 Breaking Bad is easily the best television show currently running, and only The Wire can challenge its all-time supremacy. The riveting saga of what happens when a mild-mannered science teacher dying from cancer makes a fatally bad decision to cook methamphetamine has more twists and turns than the wildest ride at Six Flags. Creator Vince Gilligan focuses heavily on visual art, such as clever point-of-view cameras and breathtaking shots of the New Mexico landscape more often than he does music, which most often used as ambient background sound. The show's judicious use of music makes the occasions when it does that much more poignant. I suppose at this point, I am obligated to issue the clichéd "spoiler alert", as this column contains myriad key plot points over the show's first four and a half seasons. I will not do that, however, for if you are not watching this brilliant show, you should not be allowed to own a television.

In preparation for Sunday's continuation of the final season, we recall some of the best musical moments in the show's incredible history.

The Cover Up. Having long ago abandoned any sense of shame, Walter White needs to cover up his grave misdeed from the Season 4 finale (more on that later). Jesse is unable to find the cigarette which contained a vial of ricin intended for fast food restaurateur and merciless drug kingpin Gustavo Fring--for good reason, as White had hired a henchman to deftly lift it from his pocket. White nobly comes to Jesse's house to help him search for the cigarette, as "Stay on the Outside" by Whitey plays over the sped-up montage. It is ultimately found in the tireless Roomba, again for good reason, as White has planted it there. Walter has now successfully cleared himself of the crime Jesse had correctly accused him of committing, allowing the partnership to go forward. Not only that, but White has laid immeasurable guilt on the conscience of his again-devoted partner, who is the sweetest and most sensitive meth-dealing murderer in the world.

The Machine. With Jesse and fellow associate Mike Ehrmantrout in temporary retirement in Season 5, the Walter White drug empire continues to run like a pre-bankruptcy Detroit assembly line (too soon?). Two things that should be obvious about the musical choices of Breaking Bad: it loves a good montage, and it loves to use poppy old songs that belie the serious and hideous nature of the drug trade and its attendant victims. "Crystal Blue Persuasion" by Tommy James and the Shondells accomplishes both, with the added bonus of the obvious reference of "blue" to the blue meth the team is shown making, distributing and selling.

Protecting the turf. On a trip to his local big box hardware store, Walter White spots an aspiring but clueless meth manufacturer, easily identified by the ingredients filling his shopping cart. As if reverting to his teaching background, White attempts to assist the would-be criminal by informing him that he is buying the wrong kind of matches and that he would be wise to purchase these items piecemeal rather than all at once. The stunned shopper turns tail and sprints out of the store as White gets in line to pay for his paint. Suddenly, White's alter ego emerges, so he drops the paint and marches purposefully into the parking lot to the tune of "DLZ" by TV on the Radio. White walks over to the young man he moments ago tried to help and is confronted by his enormous, menacing partner. White looks the hulking man over, stares unafraid into his eyes and growls, "Stay out of my territory," and the two immediately oblige.

Tying Up the Loose Ends. In easily the most disturbing montage of the series, Walt proves once and for all that his soul is irreversibly corrupted. He knows now that his enemy is dead, the primary risk to his business and freedom are the ten jailed Fring associates, any one of which could provide incriminating information. White orchestrates the brutal slaying of these ten men in virtually simultaneous fashion, even morbidly setting a stopwatch to the mayhem that takes place within a single minute. In classic Breaking Bad fashion, the hideous murders are committed montage-style to the smooth sounds of "Pick Yourself Up" by Nat King Cole and George Shearing.

The music continues on the next page. Happy Birthday. Walter White is turning 50 as the series begins. His wife Skyler and son Walter Junior have gathered a small contingent of friends and family to their modest Albuquerque home to celebrate in the most boring party imaginable. White has previously learned in secret that he has terminal cancer and mere months to live. His brother-in-law, Hank, is a Drug Enforcement Agency agent and he shows the group video from a recent bust where hundreds of thousands of dollars are clearly noticed by Walt. Desperate for money both for his expensive treatments and to leave his family after he dies, the wheels are set in motion. Later, in season 2, Skyler does her best homage to Marilyn Monroe as she sings "Happy Birthday" to her boss and future adultery mate Ted Beneke. Anna Gunn gives it her best shot, but it is a little like Adam Levine trying to cover a Clash song.

The Customer. In Season 3, a glimpse is given into the life of drug trade's consumer base in hilarious and disturbing fashion. As the sunny and bouncy pop song "Windy" by The Association plays over a montage of Wendy the meth-addicted prostitute plying her "trade" in the front seats of a long succession of clients' cars and enjoying the fruits of that labor. The juxtaposition of the aggressively happy song with the tragically sad scenes would be funny for the irony if it weren't probably so sadly accurate.

The Reveal. Season 4 focuses extensively on the war between Walter White and Gustavo Fring. In the penultimate episode, the son of Jesse's girlfriend falls ill to an apparent poisoning. Pinkman blames Walter, as a cigarette he has been carrying all season containing a lethal vial of ricin has gone missing. After White emerges victorious over Fring in unforgettable fashion, the new lord of the meth trade sits on his patio repeatedly spinning a gun on a table. The gun twice stops pointed directly at the grim-faced Walt, giving the impression that he may be harboring suicidal thoughts. The third time, it points toward a potted plant on the rock garden. After showing how White earlier sums up the day to his wife Skyler ("I won"), the camera slowly pans in to the gentle chimes and soft guitar opener of "Black" by Danger Mouse and Daniel Luppi. The audience is shown the tag of the plant, reading Lilly of the Valley, revealing that Walter White had, in fact, poisoned the young son of Jesse's girlfriend as part of his plan to take down Fring. Black, indeed.