When you open yourself up to teh Twitterz, there's a risk that someone will find you powerful or amusing enough to devote a parody account to you. St. Louis Cardinals broadcaster Mike Shannon, the "Nomi Malone" character from Showgirls and even RFT editor in chief Tom Finkel have experienced the curse of the double (via @fakemikeshannon, @realnomimalone and @realtfink, respectively). We get it; imitation is the highest form of flattery and all that jazz. But sometimes the worship is a little crazier than that, isn't it -- especially when celebrities mock other celebrities for a spell? Just look at Diplo:

Diplo (@diplo) apparently has decided that he'd like to be Beyonce when he grows up. The DJ has taken Bey's name for his Twitter profile and has been talking up the vegetable that dancers seem to love:

why did i buy this 25 pound bag of carrots

Well, carrots certainly are one way to keep Beyonce's mile-long legs in shape, so we'll confess to believing for .075 seconds that Bey really did say this. Diplo's next tweet, though... well...

Come on, Diplo, Beyonce's not going to stumble naked through her mansion when she's clearly buying clothes and accessories from Target.

We at RFT Music are suckers for smarties, and Jon Wurster (@jonwurster) of the Mountain Goats and Superchunk doesn't let us down:

Teenaged supermarket employee said to me: "You can leave those bags there if you wish." Told him I want to ask out his English teacher.

Is there anything hotter than a guy who appreciates good grammar? No, there is not.

Everyone has a hard-on for Ke$ha's (@keshasuxx) favorite piece of jewelry, and our cherished AutoTuned weirdo shows her excitement with hearts:

Don't tell anyone, but we can't wait to wear Ke$ha's penis around our neck: 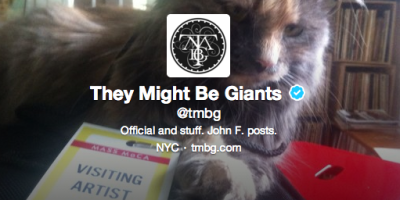 The guys in They Might Be Giants (@tmbg) love the best things ever. Exhibit A:

Southpaws wake up and take over! Kermit is our leader! pic.twitter.com/YLq5XCqPVW

We're trying to figure out a way to become BFFs with the Johns and be invited over for TV marathons and Trivial Pursuit. Any ideas?

Do you know what "family" means within the gay community? Ed Droste (@edwarddroste) of Grizzly Bear didn't, but he's now part of the club thanks to a random woman:

Awesome older woman at convenient store asked me and Chris Taylor "u guys family?", baffled I said "do we look related?"......

Then she said "oh if you don't get it forget it, don't want to offend"...I pried, mystified and finally she wanted to know if we were gay

I said I am he's not. She gave the biggest high five ever and said "sorry to be cryptic but you are in Nebraska now!" Haha she ruled

Guess she just liked knowing there are others out there. Guess we had weird haircuts and were buying smart water. Haha

And knowing is half the battle.

Think Murph will take requests? Tweet your favorite songs to us, and we'll see if the Derrty one will Instagram that shit!