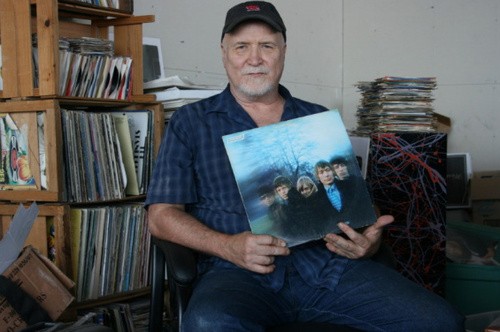 The man who today fell to his death down an elevator shaft has been identified by numerous sources close to RFT Music as Bob Reuter, 61, a legendary St. Louis music elder and beloved photographer who spent the majority of his life documenting and creating in the ever-blooming south-city scene.

Reuter was strong supporter of St. Louis arts, a DJ at KDHX (88.1 FM) and host of its Bob's Scratchy Records, and a mentor to many young local musicians. His bands the Dinosaurs, Kamikaze Cowboy and, most recently, Alley Ghost, were among the most revered acts in town.

Reuter was moving into a downtown loft when he fell to his death down an elevator shaft.

"I was his drummer, he was my best friend, we traveled the country together, played rock & roll," bandmate Bass Amp, who was on the scene when the tragedy occurred, told KSDK. "I lost it. I didn't know what to do. I couldn't believe it."

Much more information on his big, loud life and lasting influence coming soon, including tributes from Reuter's many friends and collaborators. Keep checking back at RFTMusic.com for updates.

Links to news reports of his death can be found below.