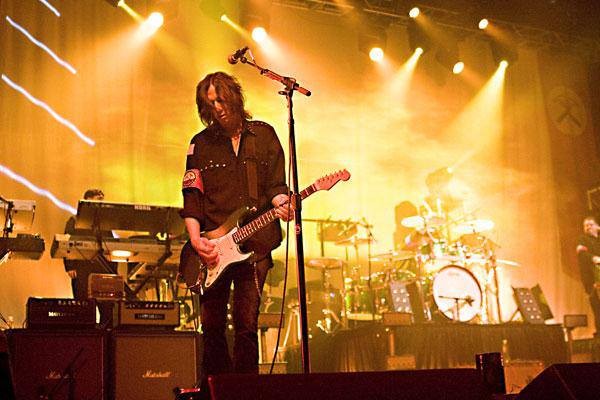 One of St. Louis' preeminent rock guitarists, Jimmy Griffin, is hosting an event this weekend to celebrate the opening of the brand new School of Rock in Ballwin, a rock band themed music school for seven to eighteen year olds.

Griffin is probably best known as the charismatic front man of local favorites The Incurables, but his many "side projects" keep him plenty busy during off hours. He's a main figure in El Monstero, the impressive world-renowned spare-no-expense Pink Floyd cover band that just lasered through Verizon Wireless Amphitheater a couple of weekends ago. His other high-profile projects include Celebration Day (September 14 at Jefferson Barracks Park), Street Fighting Band (August 16 at Alton Amphitheater) and PettyCash Junction (August 2 at Kirkwood Station Brewing Company).

The seemingly inexhaustible Griffin spends his remaining time teaching private music lessons. His teaching skills will be on display at this two hour this School of Rock "master class" where he'll be both playing guitar and speaking about his experiences in the music business. It would be difficult to find a more experienced or worthy man for the job. If you want your kids to learn from the best, this is a great place to start.

We spoke with Griffin on a rare day off about what to expect at his master class this weekend.

Jaime Lees: Tell me about your event on Saturday and what you're going to do there.

Jimmy Griffin: It's for the School of Rock, which has just opened up a campus here in St. Louis. My buddy Jordan Heimburger is a director there, and it's a kid's rock and roll camp. And, basically, they bring in artists to play for the kids and talk to them about their experiences in music. And I've done some events like that at Camp Jam, too, where people will come in and play a few songs, and then just talk to the kids because kids have tons of questions about things like that and how you've gotten where you've gotten. And you just kind of talk about life philosophies and musical philosophies and stuff that you can kind of pass along to the next generation.

You know, I've been doing this [music] since I was seventeen. And there's been various ups and downs and, just any kind of knowledge I can impart to the kids is good stuff. It's open to the public, so anybody can come. And I think it's basically an event just to raise awareness of the fact that there is a School of Rock in St. Louis now. And the audience will be just anybody that's interested in what I might have to say or who wants to listen to me play the guitar. And it's to help them find out that there's a place for their kid that might be interested in playing rock music for his life, or just for fun. I think that's what it's all about.

So the kids come with their parents and you're there and you have the guitar, but what's the scene like? Are you mostly answering questions or are you playing? Have you done one of these before, specifically?

I, personally, haven't done one, I've watched a bunch of them and at the majority of them, the kids have a bunch of questions. And I'll play a little bit and just show them-- the main thing with kids, because of their level of honesty, is that you have to kind of show them something first. You have to kind-of prove something to them, that you're worthy of them asking you a question in the first place. So, you get out there and you kick it for a little while and it's basically a lot of question and answer. You know, just so they can ask questions about how you do what you do, and why you do what you do and how you got to where you do it.

What are some of the most common questions they ask at these kind of things?

The most common ones are: When did you start playing? What was your first band? What's your favorite band? How is music different now from when you were a kid? Because they all know that I'm old, you know? [laughs] Now being that it's a rock and roll camp, they don't have to listen to me and most of them won't. Which is fine because that's what's rock and roll about it! But for someone who has been doing it as long as myself, I think there's things that I can tell them. I might be able to tell them some things that they might not get right out of the gate, and save them some time. Whether it's figuring out people that they want to play in the band with or music they're pursuing or things like that. Because there are so many avenues in music. It might just be something that you do in your room that brings you a whole bunch of joy. Or you're a live performer or you're a composer or you're a studio musician or you play jazz or whatever it is, anything that you do with music can be really beneficial and can enrich your life in a bunch of different ways.

So what is something that you tell all the kids? What's your best advice to them?

The best advice is that if you're a good person you're gonna end up playing good music with good people. And that's the whole thing. You can be the greatest at whatever you are; you can be the best drummer, you can be the greatest guitar player. But if you're a jerk, you will be sitting at home being the greatest guitar player in the world. And I know people like that. I know people that have never had the personal side of it together, and because of that, the guys that were more equipped to deal with the ups and downs of what music is are more successful.

One of the first things we always tell them is that nothing ever goes right in rock and roll. And it's the guy that you don't want to kill at a truck stop in the middle of Oklahoma at two in the morning that stays in your band, you know? A lot of things about music involve bending and being able to go with the flow and figure out your place in a group. If you look at a band like, let's say the Rolling Stones. You have Mick Jagger in your band, he's the Mick Jagger. And you might be the Bill Wyman, but Bill Wyman gets to do pretty much all the stuff that Mick Jagger does because he lets Mick Jagger be Mick Jagger. If Bill Wyman tries to be Mick Jagger, it doesn't work, and then Bill Wyman gets kicked out of the band. And that's part of it, too.

I also talk to them a lot about their first real band. Which is that band like, U2 or Aerosmith or those bands that got together when they were in high school or shortly thereafter. Those are very special things. And once that first band is over-- I had one of those bands-- once that first band is over, it's never like that ever again. It can be really good, but it's never like that first real band that you have. After that it's always a little more professional, everybody gets a little more grown up. But those first bands are the ones where you can stay young forever.

See Also: - The Top Five Notes on My Bass Guitar - The Top 10 Rappers to Whom You Can't Tell Nothin' - The Eight Smoothest Songs of the Seventies