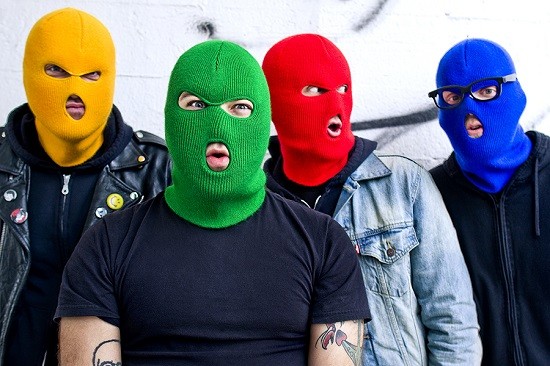 Tonight, the Firebird will set its reputation on the line by harboring a dangerous gang of masked, punk rock deviants. Fresh out of the clink, Masked Intruder comes to town headlining the Red Scare Across America Tour with Rocky Mountain punks Elway, Carbondale's the Copyrights, and British folk troubadour Sam Russo, in tow. RFT Music recently caught up with Intruder Red (drums, wears the red ski mask) via email to talk about the band's love for St. Louis, hotwiring cars, and the legal trouble one can get into if they don't party hard at a Masked Intruder show.

See Also: -Masked Intruder Steals Everything From the Parking Lot Around Cicero's

RFT Music: Masked Intruder has seemed to take a liking to playing St. Louis, as this will be (at least) your third visit in the last year. Do you have to check in with a probation officer here, or is there something in particular that draws you to our city?

Intruder Red: First thing you should know about St Louis is that it's awesome. We like to come back to it because, you know, it's awesome. Also, we have friends here. Plus, have you been to the City Museum? What a party! It's like getting shrunk by Rick Moranis and going to Chucky Cheese.

Your merch technician, Dave Wipfler, is a local boy. Most around the StL punk community know him, but is there anything you'd like to share about him that is perhaps news to us?

As it turns out, yeah. We know all kinds of embarrassing shit about that dude. All kinds of people know lots of embarrassing shit about him, though. I mean, everybody knows that he's a rad dude, and super good at high kicks. One thing you might not know: He loves bubble baths. Loves them. Weird, right? Nearest we can tell, he wants to smell like an apricot as much as possible. But, we figure he smells more like bad decisions.

For the last year or so, you have been riding high on your self-titled debut. Are there any plans to record the next album, if you haven't recorded it already?

Yeah, we have very specific plans with regard to our next album. No details at this time, unfortunately. I can say that we will be in the studio soon. I guess the songs will be different than the last record because, you know, it's a different record. But, still, it will sound like the same band. You know, like, normal. I mean, it's not going to be opera, or sound like Big Freedia or something. We are stoked on it, and we really hope ladies will like it.

Even though Masked Intruder hasn't been around all that long, you guys are, in a way, the elder statesmen of this Red Scare Across America Tour. What kind of big brotherly advice have you been doling out to the rest of the bands on tour?

Well, we did teach Tim from Elway how to hotwire a car. But, we're like students as much as teachers, you know? That's what it means to be friends, right? Sam Russo has been teaching us about how to improve our charms with the ladies. I mean, like coaching us on our British accents. He's very charming. And, we have all been teaching each other all kinds of lessons at the dice table. Hot hands!

Which criminals would you say have had the biggest influence on Masked Intruder?

There's another punk band of masked criminals who have been making headlines over the last year or two -- Pussy Riot. Have you had any contact with their camp? What are your feelings regarding their similar affinity towards ski masks?

We don't know too much about Pussy Riot, I guess. We heard about them on the internet, like everyone else, but we don't know them or anything. Are you calling us Soviet spies? I mean, we think they are cool, and we support their freedom. As far as our allegedly similar affinities and whatnot, I don't know that we really have much in common. I mean, under the surface, you know. You might as well compare us or them to the Blue Man Group. Pussy Riot is serious. They have real world problems, we just want pretty girls to like us.

Any warnings you would like to issue the people of St. Louis upon your Friday arrival?

Yeah, we have a cop on tour with us. He is like a court-appointed chaperone or whatever, and we legally have to inform people of that. His name is Officer Bradford. Officer Bradford will have zero tolerance for non-partiers in St. Louis, so let's party like we'll get arrested if we don't. Cause, we will. Seriously. This is not a joke, or supposed to be cute. Officer Bradford will arrest wallflowers all day long.