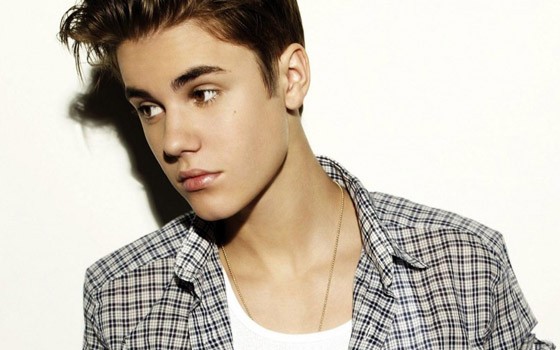 This has been a perilous year for Justin Bieber, our favorite swaggy little shit. He was snapped sipping some alleged lean; he took heat for tone-deaf comments in the Anne Frank house; he scuffled with the paparazzi; his friends keep getting his car in trouble; he peed in a mop bucket and yelled "fuck Bill Clinton," for some reason. As his image problems escalate, his career moves toward tipping point: His cute teenage years are nearly at an end, and the Believe era is winding down. What will the future hold for our boy hero?

As former Bieber Desk editor for the Boston Phoenix -- and that paper's gone now, so nobody can call me on that fact -- I'm in a unique position to speculate on the exciting year ahead.

See Also: - -Crotching Whiskey at the Justin Bieber Concert and Getting Thrown Out: A Review

January 1, 2014: At a celeb-packed New Year's Eve bash, Bieber's rapidly melting wax hotpants and "WEED CRIEMS" t-shirt cause media consternation. January 22, 2014: TMZ debuts video of Bieber alone in a vacant lot, prying apart an old air conditioner with a screwdriver, huffing a monster hit of freon, shouting "SWAG" in an unnaturally deep voice and passing out in a fit of chopped-and-screwed giggles.

February 8, 2014: Bieber sparks a nationwide debate on the ethics of tabloid culture when he lays a brick on the accelerator of his Ferrari and sends it careening into a crowd of paparazzi. March 4, 2014: Bieber's wild birthday celebration draws controversy as TMZ reveals blurry photos of the twenty-year-old heartthrob smoking a white substance out of what appears to be his still-attached house arrest ankle bracelet. April 2, 2014: Animal lovers are outraged when Bieber abandons Kansas Rudy, his 750lb pet tapir, at the Brussels airport. April 16, 2014: Worried speculation runs rampant after Bieber is photographed with his Zubas front-sagged low enough to reveal what is maaaaybe the topmost crook of a pube swastika peeking out.

May 1, 2014: Bieber debuts his new single, "P***y Murder Dracula." Despite widespread critical acclaim, some parents worry that its salty language may be inappropriate for a teen audience.

May 18, 2014: A concert in Iowa is cancelled after candid footage reveals Bieber calling Ann Landers "a boring old biddy."

June 12, 2014: Finger-wagging pundits accuse Bieber of disrespect after he wears a knee-length t-shirt emblazoned with a huge urinal and the words "PISS BOY" to a private dinner with the Obama family.

September 8, 2014: A half-aroused Bieber shows up at the 2014 MTV Video Music Awards wearing only a black tank top and purple Supra high tops. Stammering red carpet interviewers pretend not to notice. Producers scramble to film him only from the waist up.

September 11, 2014: Cell phone footage emerges of Bieber laughingly attempting to arc his pee upward onto a half-staff American flag outside Yankee Stadium. Public outrage follows, even though his whiz stream only barely manages to wing the bottom of it.

October 26, 2014: Troubling video footage on TMZ seems to depict Bieber wearing a Heaven's Gate jumpsuit, "Away Team" armband and clean Nike Decades, snorting a line of Flavor Ade off a bronze bust of L. Ron Hubbard. A confused America is unsure how to respond.

November 7, 2014: Bieber gets a daring new haircut: shaved on the sides, bowl cut parted in the middle, gelled down heavily. December 31, 2014: Bieber tweets that he'll be enjoying a "quiet night with friends" on New Year's Eve. The wholesomeness is undercut by the attached Instagram selfie of Bieber sharing a styrofoam lean toast with Dzokhar Tsarnaev inside the DC Holocaust Museum.

Thanks to my friend Jeb Lund for joke assistance.