Ranking the Gathering of the Juggalos Infomercials 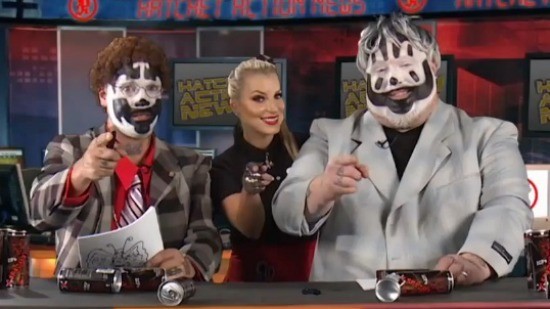 See Also: - We Test the ICP "Juggalo Locator" App, for the Sake of Journalism - Best of the 2012 Gathering of the Juggalos

To some, Juggalos may seem like the most reviled fanbase in all of popular music. Not unlike the Grateful Dead's Deadheads, Jimmy Buffet's Parrotheads and Jimmy Ray's Rayheads, they're a group largely marginalized and victimized because they're really excited about a particular artist's music. Granted, the Dark Carnival's welcoming arms tend to be so inclusive that they draw upon many societal misfits, which made last year's infomercial a call-to-arms from the war zone that is underground vs. mainstream. Coincidentally, the lines between mainstream and underground hip-hop became more blurred that summer including at the Gathering which featured performances from Danny Brown, the Game and Master P.

The 2011 Gathering infomercial boasted our beloved hosts Sugar Slam and DJ Clay joined by Vanilla Ice and producer Mike E. Clark donning alien costumes and bringing a full outer-space outsiders' perspective on the Gathering of the Juggalos. As great as it is to hear Clark/Clerg's excited reaction to Juvenile's announced performance, the real achievement here is how in its third installment the Gathering infomercial feels like a full-fledged event. The production values stepped up, signaling the infomercial truly being an institution.

This year's infomercial largely did away with the special guest hosts as Violent J and Shaggy 2 Dope themselves, as well as Sugar Slam, gave us the lowdown through their mock special news broadcast, the Weekly Freekly Weekly. In further proof that the clowns happen to be really funny guys, this year's presentation appears to be largely off the cuff. If anybody knows how to get you excited for a group neither you nor the person talking to you has ever heard of, it's Violent J. Also notable this year is the emphasis on young talent. Whereas the bulk of the other Gatherings have promoted returning stars of yesteryear, this year's heavily hyping debuts of hither-to-unknown artists like Big Hoodoo, first Gathering appearances of Sevendust and Buckwheat Groats and even the wrestling tent promoting today's independent favorites such as the Young Bucks and Kevin Steen.

Everyone remembers their first, and for many this was it. A year before the Insane Clown Posse was seen from computer screen to computer screen asking the immortal question "Fucking magnets, how do they work?" and a good month before they returned to the No. 4 slot on the Billboard 200, ICP began their viral insurgence with this infomercial for the tenth annual Gathering of the Juggalos. Hosted by Sugar Slam and DJ Clay, the rundown of acts promoted alongside "dudes on stilts" and "helicopter rides" became so embraced that it eventually lead to a recurring sketch on Saturday Night Live.

At the height of its "Miracles" resurgence that saw the duo become not only increasingly relevant but, dare I say, respected for their twenty-plus year hustle, ICP unveiled the second Gathering of the Juggalos infomercial and, not unlike The Godfather Part 2 or Turbo: A Power Rangers Movie, it proved the second incarnation was the best of the franchise. This year's theme was the Wild West in honor of the release of the duo's Western comedy Big Money Ru$tla$, as so we join Sugar Slam, DJ Clay and Detroit rap legend Awesome Dre as they road trip to the Gathering, promising some of west coast hip-hop's legit all time greatest along the way. From the chemistry of the hosts, to the sheer glee of announcing the Gathering debuts of Gallagher and Tom Green, this infomercial is truly as good as the Dark Carnival's corner of the Internet gets.